The Old Fort landslide hasn't moved much since it slipped nearly a year ago, and there are no plans to monitor the rest of the hills above the riverside community, the province says.
Aug 7, 2019 2:28 PM By: Alaska Highway News Staff 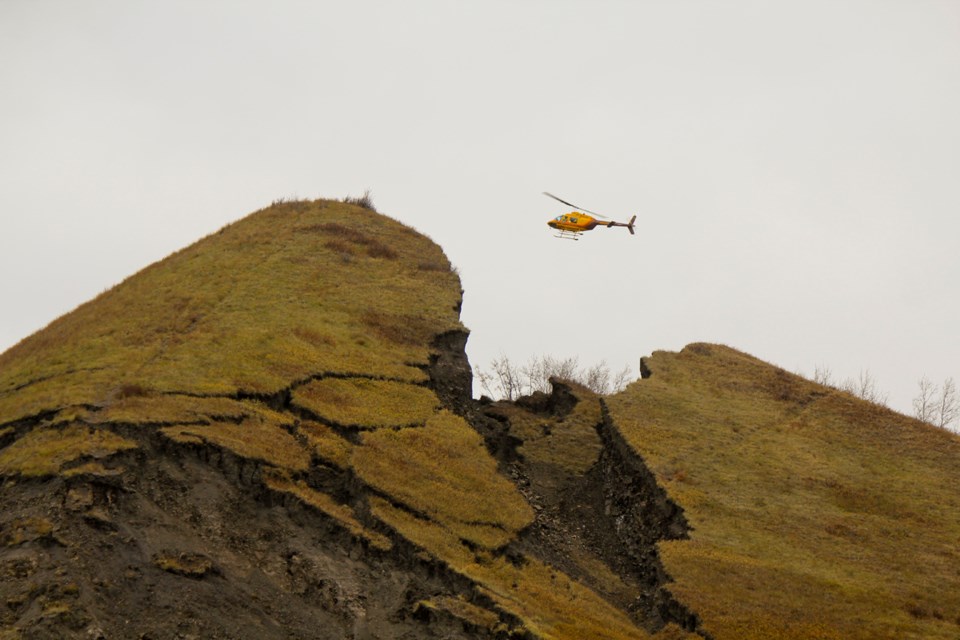 A helicopter takes a LIDAR survey of the Old Fort landslide to assess its progress and speed, and condition of the hillside, Oct. 6, 2018.Matt Preprost

The Old Fort landslide hasn't moved much since it slipped nearly a year ago, and there are no plans to monitor the rest of the hills above the riverside community, the province says.

Public Safety Minister Mike Farnworth says it's unlikely the remaining hillside above Old Fort will see a "dramatic slippage" that will further impact homes. If it were to slip, it would be slow-moving, similar to the weeks-long slide that began at the end of September 2018, he said.

"Given the risk assessment of this slide, there is no current plan to monitor the entire hillside," Farnworth wrote in a July 26 letter to government officials in the Peace region.

Very minimal movement has been detected since that initial slide, Farnworth said, which sent more than eight million cubic metres of earth and trees toward the Peace River, destroying one house, several utility lines, and the only road in and out of the community.

The ministry of transportation continues to monitor the slide for movement through a network of 10 sensors placed throughout the debris.

There has been no significant movement this summer, and movement during spring runoff was less than expected, a spokesperson said. The highest recorded movement in the spring was three centimetres per day, and most were less than one centimetre per day, they said.

"This movement was well within reasonable limits and did not pose any safety risk," the spokesperson said.

"We do not anticipate any further substantial movement of the slide at this time. For the safety of the people who live in the area, and as a precautionary measure, we will continue to monitor the activity of the area."

At its peak, the slide was moving dozens of metres in a single day, and when Farnworth flew to Fort St. John to survey the slide two weeks after it began.

The ministry has protocols in place to respond to any significant new movement, and to share that information with both the provincial and local governments, Farnworth said.

While the landslide has changed natural drainage patterns in the area, there are no plans to reshape or revegetate the fallen slope, Farnworth said, nor are any other landslide mitigation measures being considered.

"Changes in the drainage pattern can be expected following a landslide," Farnworth said, adding ministry staff have met with property owners to provide advice and address any concerns.

"It will take some time to fully ascertain the changes that have occurred in the area and whether there are reasonable actions that may be taken."

The ministry of transportation is continuing to monitor Old Fort Road, a section of which was rebuilt with gravel through the landslide debris. The ministry will plan to hard surface the road once its confident the slide area has stabilized.

"The ministry would like to see the area experience at least another spring of slide stabilization before we make that determination," the spokesperson said.

Some minor improvements to the road, such as approaches and new culverts, are to be made this year. The ministry is working to address outstanding garbage and debris piles, Farnworth said.

Geotechnical engineers have said the slide was caused by a failure in the bedrock at the head of the landslide, where a gravel quarry had been operating on the hillside above Old Fort.

The ground beneath the slide had been moving for months before it finally gave way in a massive collapse on Sept. 30. More than 150 residents were ordered to evacuate the following week, and were kept out of their homes for nearly a month.

The landslide triggered another slide below the iconic Peace River viewpoint, which remains closed, and sent a large tension crack splitting out to the east toward Old Fort homes.

Core samples have been taken from the quarry to study the subsurface conditions under the slide area to better understand the cause and extent of the failure, as well as current slope stability to determine setbacks for any future operations.

There is critical civic infrastructure along the Old Fort hills, including Fort St. John's south sewage lagoon and discharge line, its raw water supply line, and the micro-hydro power station.

While none of those were damaged by the landslide, the City of Fort St. John is spending $200,000 this year to study the stability of the hills and future risks to those pieces of infrastructure.