The Peace River Regional District board will decide whether Old Fort residents can finally return home on Sunday. The board has scheduled a special meeting for 11 a.m.
Nov 3, 2018 4:54 PM By: Alaska Highway News Staff 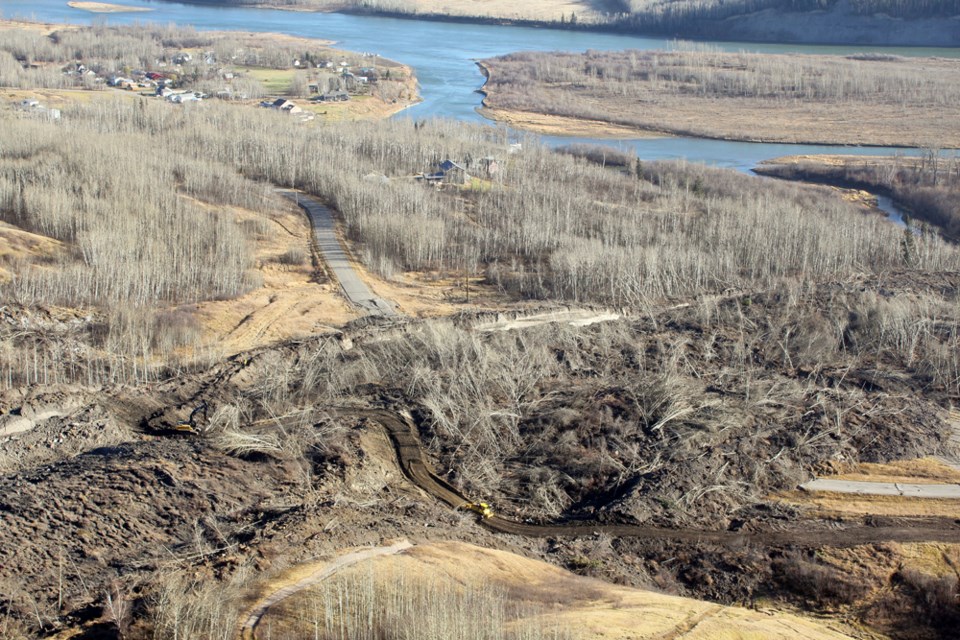 The Peace River Regional District board will decide whether Old Fort residents can finally return home on Sunday.

The board has scheduled a special meeting for 11 a.m. to review the early findings of a geotechnical report after a massive landslide on Sept. 30 cut off road access and power to the small community along the Peace River.

A meeting for residents has been scheduled for after the board meeting.

“In anticipation of possible changes to the existing orders, PRRD staff have prepared re-entry packages for residents of Old Fort and have organized de-winterization and provision of water for homes in Old Fort,” Shawn Dahlen, acting chief administrative officer, writes in an administrative report.

“Residents are encouraged to attend the Northern Grand Hotel immediately following the Board meeting to speak with staff to arrange these services.”

Residents were ordered to evacuate on Oct. 7, one week after the landslide began.

Westrek Geotechnical Services has been studying the cause of the landslide and has submitted its final draft report to the regional district, which has been reviewed by BGC Engineering and the provincial ministry of forests, lands, and natural resources.

The landslide began at the south end of a gravel quarry that had been operating on the hillside above Old Fort, “with sudden movement” in the shale bedrock that extended 160 metres into the pit from the edge of the hill, Westrek writes in its report.

“The ground within the pit dropped more than 10 m and slid approximately 12 m to the south, setting in motion a complex series of other landslides."

The main slide was last estimated at more than eight million cubic metres, and had slowly made its way to the Peace River by Oct. 8. One home has been “severely damaged,” along with a wide section of Old Fort Road, and utility transmission lines, the report notes.

Westrek's report recommends that evacuation orders be lifted for most homes in Old Fort well east of the landslide, including homes on Old Fort Road, River Drive, and Old Fort Loop, and Trapper Road.

Work at gravel pit should only resume when when a safe work plan has been approved by the ministry of energy, mines and petroleum resources, Westrek said.

"Work directly on the landslide within the pit should be limited to removal of existing stockpiles," the report notes.

The potential for the slide to move again is high, and more detailed investigation and monitoring is needed, Westrek wrote.

The ministry of transportation and infrastructure, which has built temporary road through the landslide debris, has set up monitoring points, however, Westrek expects spring freshet to "severely" damage that road.

“The latest results show minimal movement in more than one week, indicating that large scale movement has ceased; however, the landslide is not considered inactive,” Westrek wrote.

“Conditions on the landslide can change with little to no warning; therefore, the entire landslide mass, including the rockslide, earth flow, and both adjacent landslides, should be considered to be at imminent likelihood of movement.”

BGC Engineering said it agreed with Westrek’s assessment that most homes in Old Fort were not at imminent risk of impact from the landslide. It disagreed with some of the company’s assessments about properties it believes are still at risk.

“Our preliminary opinion is most homes are not likely to be impacted by damaging landslide movements associated with the Old Fort Landslide prior to significant snow melt and/or rainfall in spring 2019,” BGC wrote in its report.

BGC also recommended continued monitoring of the landslide. It said residents should be warned of the hazards that remain.

“The Old Fort Landslide event has resulted in several deep ground cracks within and around the margins of the landslide,” BGC wrote.

“Many of these cracks are difficult to see and could pose a safety hazard to persons and pets walking near them.”

Read the report by clicking here.