The Old Fort landslide has grown to more than six million cubic metres, but when it will stop and when evacuees can return home is anyone’s guess.
Oct 8, 2018 12:11 PM By: Alaska Highway News Staff 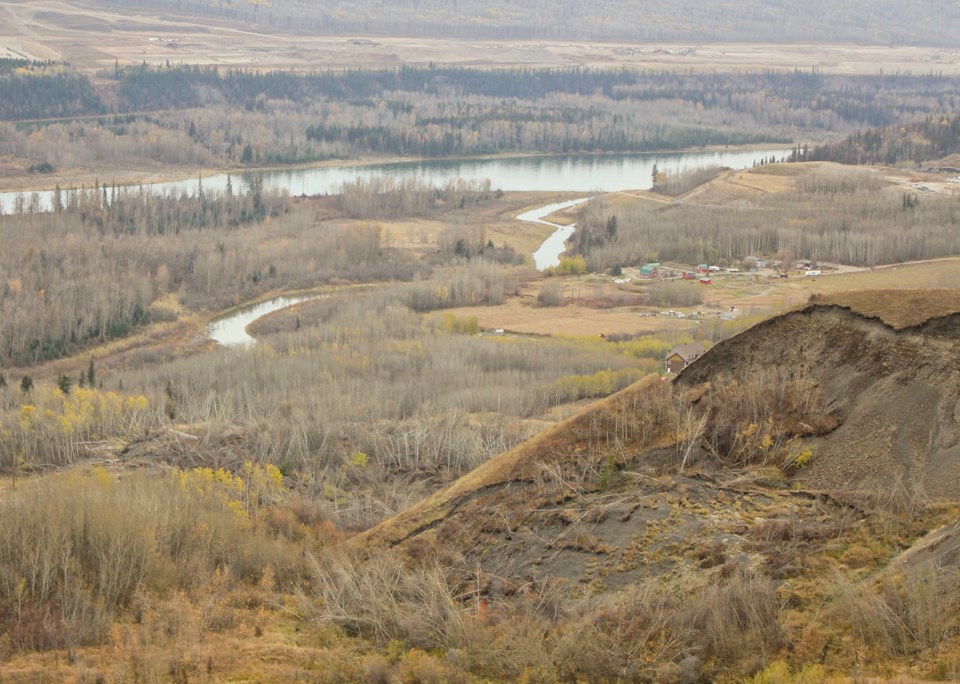 The Old Fort landslide has grown to more than six million cubic metres, but when it will stop and when evacuees can return home is anyone’s guess.

Rhonda Mellafont, an engineering geologist with Westrek Geotech, gave residents an update on the extent of the slide during a community meeting Monday morning, saying the slide is “radiating” in a number of directions that make it difficult to predict when it will stop and where it will spread.

“It is a very deep-seated failure,” Mellafont said.

Mellafont was hired by the Peace River Regional District and arrived Friday. She's been collecting data through helicopter surveys and ground truthing investigations, however, the scope and speed of the landslide has prevented further data from being collected, she said.

The landslide has been moving between five to 10 metres a day and doesn’t appear to be slowing down, she said.

As of Monday morning, the slide had reached a back channel next to the Peace River and reactivated a number of “relic” landslides in the area. Those slides can give in at any moment, she said.

“It is still moving significantly,” she said.

Things are expected to get worse through the winter with rain and snow, and freeze thaw conditions.

“With exposed soils in these existing failures, it has the potential to worsen conditions and potentially speed up the process,” she said.

Old Fort residents were ordered to evacuate on Sunday afternoon, one week after the landslide began on Sept. 30.

Mellafont says the area remains unsafe due to the instability.

Further investigation plans, including drilling, are being discussed with the regional district, Mellafont said. But those can't start until the slide stops. Even then, it will take many more months of study and analysis when it does, she said.

“It’s not safe for habitation and I cannot tell you it will remain safe to return home at this time,” Mellafont said.

Officials with Yellowhead Road & Bridge and the Ministry of Transportation and Infrastructure say they are studying a number of different options to re-establish road access to Old Fort.

The preferred route is to re-establish the road close to where it is, but that’s been challenged by the ongoing movement of the slide. Every direction is being studied, but each option come with its own challenges, from environmental to private property access.

An official with the Ministry of Energy, Mines & Petroleum Resources says the ministry was informed the day of the slide that the outer edge of a gravel pit operating above the landslide on the 240 Road had dropped eight to 10 metres.

The operation was properly permitted, the official said, and crews are working to remove up to 50,000 cubic metres of stockpile gravel from the site to alleviate the weight load above the slide.

That’s more of a precaution than an indication the gravel pit was the “surefire cause” of the slide, the official said. The cause of the slide remains under investigation.

“The nature of the slide and the fact most of the activity is carrying on downslope leads us to believe the material had minimal impact,” the official said.

“I don’t know how (the ministry) can assure us they aren’t causing that slide to keep moving right now,” one resident said.

“Why is it safe for them to be working up there while everyone else has to be evacuated?” asked another resident.

Residents will be given permits to re-enter their homes to gather belongings on a priority basis.

The regional district is also looking at long-term plans to winterize homes and address housing and vehicle issues for evacuees.

There is no plan to clear the landslide debris at this time.

The Peace River lookout remains closed indefinitely due to the instability and a reactivated slide below it.

Some residents questioned whether the Site C construction zone two kilometres upstream was in danger, and why the site was also not ordered to evacuate. Some residents asked if work at Site C could be shut down until the landslide issue is resolved.

Mellafont said the area near Site C is not considered to be at risk.