The Old Fort landslide has been impacted by ponding and flowing water caused by heavy rainfall this week. The Fort St.
Jul 2, 2020 4:57 PM By: Alaska Highway News Staff 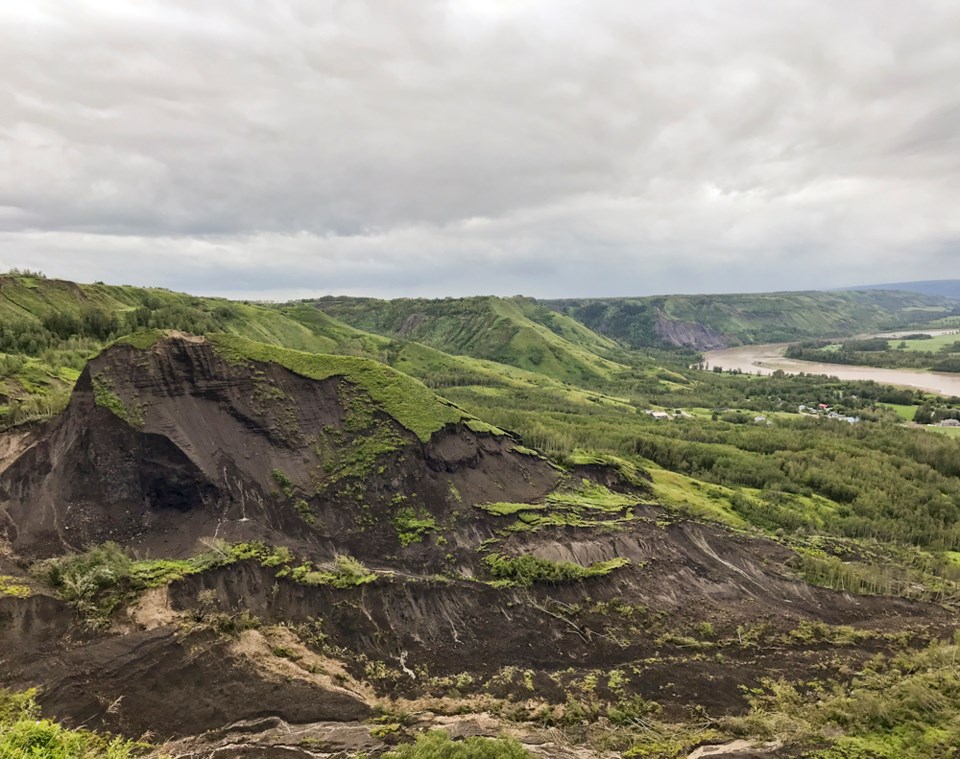 The Old Fort landslide has been impacted by ponding and flowing water caused by heavy rainfall this week.

The Fort St. John region has seen between 30 to 40mm over the last 24 hours, and is expected to see up to 20mm more overnight Thursday, with the potential for more if there are thundershowers. Another 10 to 15mm is expected Friday.

The ponding and flowing water issues are being seen on the east side of the slide, according to today’s update from the Ministry of Transportation.

The slide is moving at “negligible rates,” but is being monitored for further activity and movement.

The rainfall has forced a water taxi service for residents to Taylor to be suspended for safety reasons due to heavy debris in the Peace River.

The Peace River Regional District says it has received reports that residents have started to construct a switchback trail over the slide with ATVs, and that slide monitoring posts have been removed.

“This undermines the measurement and planning work required before the reconstruction of the road can begin,” the regional district said. “Residents need to remember that the slide is extremely unsafe, and to not disturb any markers or equipment around the slide area.”

This is the second time in 20 months residents have been cut off by the same landslide, first in September 2018, and again on June 18 after more than 50 mm of heavy rain drenched the city.

“Right now, we’re waiting to see how the slide will respond to the upcoming rain,” Rena Gibson of the Ministry of Transportation told residents in a public meeting held June 29. “If the slide is stable, then we can consider starting to rebuild.”

The slide must slow to less than one metre of movement per day and the site must be dry before any road building begins. Meteorologists say they don't see a significant drying period on the horizon, and wet weather is expected to continue.

At the June 29 meeting, residents suggested the province make efforts to stabilize the hillside, or start seriously looking at the potential of relocating the community.

“We need this stabilized, the entire hillside, or relocate the Old Fort community. There really is nothing else to do," said resident Gord Pardy. "The only other thing that can be done is nothing, which is what we’ve been doing for the past two years. That’s not acceptable. There has been no plan and no action.”

Geotechnical engineer Brent Case dismissed the option of stabilizing the slopes, saying it would cause even more problems.

“We can throw an awful lot of steel into the ground to try keeping it there, we can try to re-slope it. The problem is if you try to blast it, you’ll probably start another landslide somewhere close. If you try to re-slope the slope, now you’re probably going to have that landslide wanting to go further up the hill,” said Case.

“If it moves too far, it keeps going up the hill. And if you play with it, then we’re going up past the 240 Road with this thing failing,” he said.

Old Fort Road will likely be rebuilt in the same spot.

“The road that goes down there, other than that 150 metres that’s been affected, is in the best location you can have for getting access into that valley,” Case said.

“Any other access out of that valley is way worse, from a geotechnical point of view, and will probably end up causing another slide trying to put anything in.”

Read more from the June 29 meeting by clicking here.