The Old Fort landslide has slowed significantly from last week, according to the latest provincial update. The slide has destroyed 100 metres of Old Fort Road and moved it 300 metres to the Peace River since it reactivated on June 18.
Jun 29, 2020 5:00 PM By: Alaska Highway News Staff 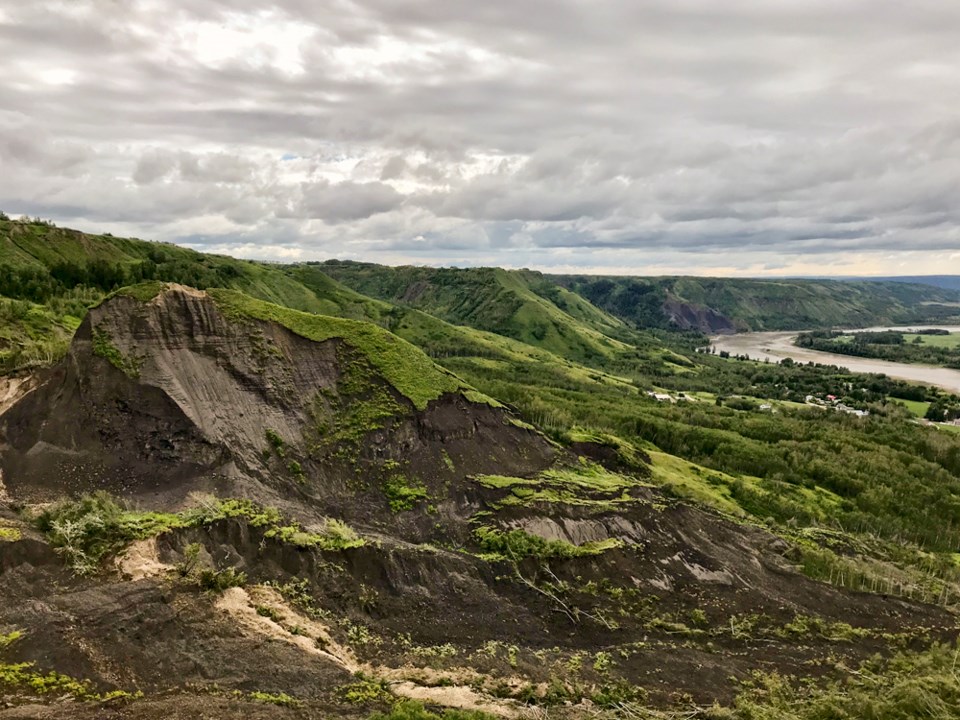 The Old Fort landslide has slowed significantly from last week, according to the latest provincial update.

The slide has destroyed 100 metres of Old Fort Road and moved it 300 metres to the Peace River since it reactivated on June 18. It was moving 0.1 metres per hour on Monday, or about four inches, down from the two metres per hour reported last week. It must slow to less than 1 metre per day before road reconstruction can begin.

Around 150 live in Old Fort, and those who remain are under evacuation alert as access to the community by road remains severed. A water taxi between Old Fort and Taylor launched Monday.

At least 57 residents have evacuated and registered for emergency support services, and the PRRD says planning continues for residents who have chosen to shelter in place.

The PRRD says it hopes the slide will slow enough for the Ministry of Transportation to build a temporary access tote road for water supply and garbage and sewage removal.

With the water taxi in place, the Ministry of Transportation said its maintenance contractor will be removing its equipment from the area until a road can be built.

“The slide continues to adjust to on-going changes and although the movements are currently slowing, it is not possible to continuously monitor and report all site changes and that makes the slide unsafe for the public to cross,” the ministry said.

The PRRD says the slide is unsafe to cross. The lookout at the south end of 100 Street also remains under evacuation order.

Last week, PRRD board chair Brad Sperling said there were no immediate plans to order residents to evacuate. That recommendation has to come from the province and its geotechnical engineers, who continue to monitor the slide to determine whether residents are in danger, he said.

Residents had to evacuate for more than a month at the onset of winter when the slide first collapsed at the end of September 2018.

“We’ve learned a lot more since that time, and this time someone’s really going to have to tell us those people are in danger,” Sperling said June 26 during an interview on MooseFM. “So far they keep telling us they’re not.”

Resident Art Smith says the mood for some in the community is better now than in 2018, as residents don’t have to rush to evacuate and winterize their homes.

But there are still concerns about the long-term impacts to property values (a few were in the process of selling and moving), and the potential for the slide to continue reactivating, he said.

“Do we do this in another two years again? Or a year? There’s no stability now with even having access,” said Smith. He’s chosen to remain in his home and quads up the hills to go to work.

Smith said many residents don’t want Old Fort Road rebuilt in the same place, unless the slopes are stabilized.

“Get rid of these sloughs here now,” he said. “If they leave it like last time, it’s going to go again.”

Sperling said it’s the province’s responsibility to build residents a safe, permanent road, and to effectively deal with the slide.

“The ministry is responsible for the road, and the slide is on Crown land,” Sperling said. “They have to decide what the future of those people is, and give them some comfort. They can’t be going through this every two years.”

Meanwhile, B.C.s information and privacy commissioner last week ordered the Ministry of Energy and Mines to provide it with a complete and unsevered copy of the records related to its investigation of the 2018 slide.

The PRRD filed a freedom of information request in January seeking those records but the province refused to release them, saying disclosure would be harmful to law enforcement.

Monique LeBlanc has been assigned to investigate and mediate the case.