The Peace River Regional District says it has a plan and the resources to help Old Fort evacuees gather their belongings and winterize their homes when it's safe to do so.
Oct 10, 2018 10:27 AM By: Alaska Highway News Staff 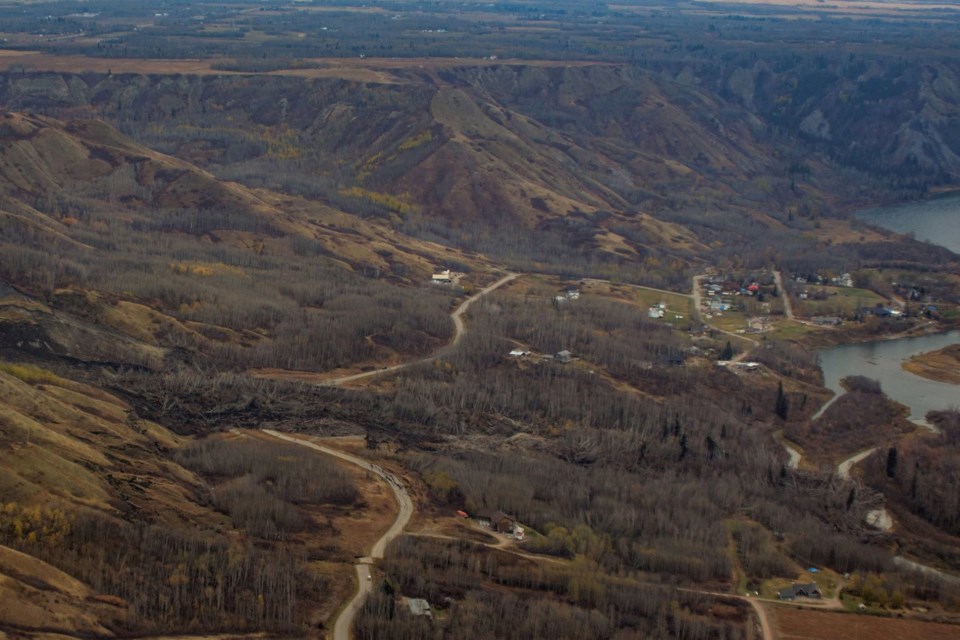 Old Fort landslide, Oct. 9, 2018, and its proximity to the Old Fort community.Darcy Shawchek

The Peace River Regional District says it has a plan and the resources to help Old Fort evacuees gather their belongings and winterize their homes when it's safe to do so. But that hasn't stopped residents from making their way into the community today to do just that instead of waiting for the green light from government.

The regional district says it's developed a plan with an experienced contractor that has the equipment and resources necessary for the evacuees.

"At this time, it is not safe for ANYONE to enter the evacuation order area – from land or by water. Volunteers MUST NOT enter this area and MUST not transport anyone to the EVACUATION ORDER area," the regional district wrote in an update Wednesday morning.

"The priority is the safety of the responders and the public. Although important to individuals, everything in our homes can be replaced, but lives cannot. Once it is safe to do so, the PRRD EOC will action the plan to recover belongings and vehicles and winterize homes."

However, that plan won't be published or made available to residents until it's safe to enter, officials say.

Around a dozen boats made it to the community this morning in defiance of the regional district's orders so residents can gather belongings, pets and livestock, and begin winterizing homes.

They're being helped by local volunteers and contractors. Helicopters are dropping in loads of supplies and plumbers to help. Police are reported to be on scene and are patrolling the river.

"We don't feel unsafe and we don't believe the government is really working," said resident Gord Pardy, who was looking over the community and the activity taking place from a nearby hillside.

"The incompetence from last week, we just got no confidence in what's going on here."

The slide started Sept. 30, blocking and destroying Old Fort Road, the only road in and out of the community, as it slowly makes its way toward the Peace River.

The slide is an estimated six million cubic metres in size, and growing. It's moving between five to 10 metres a day, and has triggered a number of other slides in the area. Most of the community is not in the landslide's path, though some nearby homes have been impacted with reports of damage.

Residents were ordered to evacuate on Oct. 7, an order that's affected 54 homes.

At a community meeting on Oct. 8, officials said residents may not be able to return home for months, with fears the landslide will get worse as winter nears and precipitation starts to fall.

Residents expressed their frustrations about the abrupt evacuation and the need for it, and the plan for being able to collect their belongings and secure their homes.

The regional district had planned to issue temporary access permits, however, those were suspended the next morning.

D. Bauer Mechanical says it mobilized at 6 a.m. this morning, and has six or seven plumbers on the ground in Old Fort working to winterize the homes — draining and flushing pipes and water heaters, and pumping water lines with anti-freeze.

The company pulled workers off another job in Dawson Creek to help out the residents today, and is donating its labour with supplies donated from a number of other local businesses, including cases of anti-freeze, compressors, and generators.

"Whenever people are in need, you want to help as much as possible. Old Fort may as well be considered Fort St. John," Tyerman said.

"It's not like they're miles and miles away from us. We do lots of work down there. It's something we can help with."

Jason Linley is one volunteer who boated residents in today. He says more help is needed and that the government needs to give residents an immediate window and the equipment to get the job done.

He criticized the government for its lack of response, pointing to the capacity of manpower and equipment at the Site C dam construction site two kilometres upstream, which he said could easily build a suitable road back into the community for residents to properly evacuate.

"These people have their whole entire lives they need to uproot, and we're supposed to do it with backpacks and donkeys?"