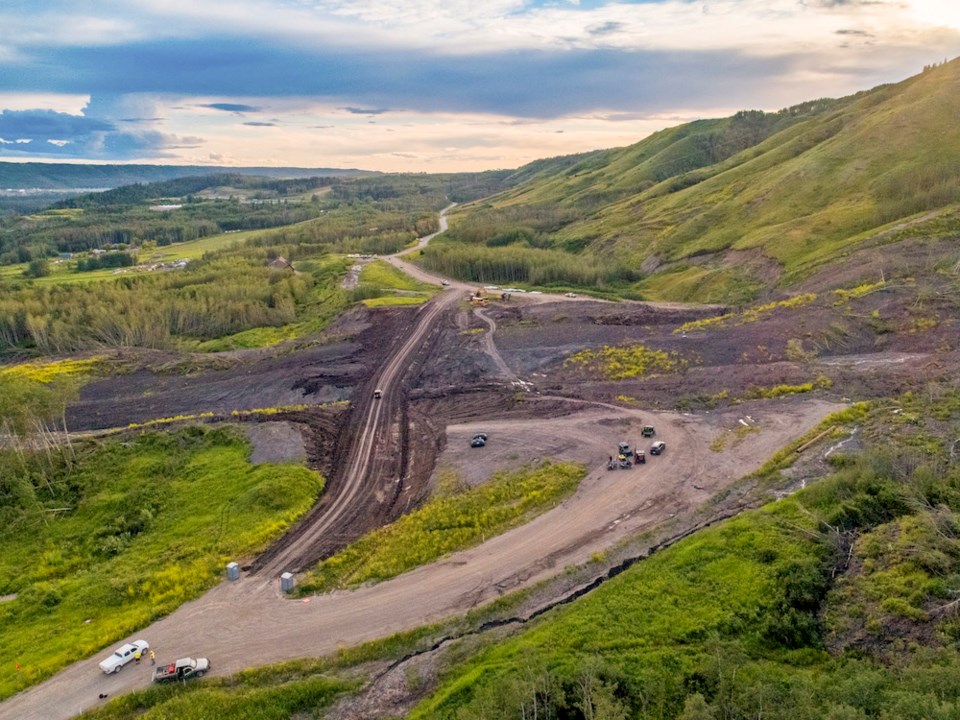 Ministry of Transportation crews built a temporary swamp-mat road through the Old Fort landslide and opened it to traffic on July 9, 2020.BC Transportation and Infrastructure

The Peace River Regional District says the Old Fort Road will open at 5 p.m. to all vehicle types.

The road will be open 24 hours a day, seven days a week, though construction over the next few days may cause occasional traffic delays up to 20 minutes, the regional district said.

A 100-metre section of the road was destroyed June 18 when a landslide reactivated after heavy rains, putting residents on evacuation alert and prompting several dozen to self-evacuate from the area.

A rough road for utility vehicles only was first punched through landslide debris and opened July 9.

The following assessments of the landslide have been provided:

Ministry of Transportation – Road and Slide Impacts On The Road

Currently the instrumentation is showing negligible movement for all parts of the slide and the road is safe for public use. The ravelling that is occurring on the steep scarp beside the ridge will continue but any failure there would not be able to make it down to the road. It will land on the top part of the flow part of the slide. The only thing that the road will do in the future is move towards the river if the flow part of the slide re-activates the same way it has done for the last two episodes. It is near impossible to predict when the slide will start moving again, but the instrumentation is there and will continue to be monitored. There is nothing to indicate anything catastrophic would happen to the road.

Ongoing monitoring of the eastern landslide complex continues to show negligible displacement. Ravelling of the upper scarps will likely be restricted to the upper part of the earth flow, and movement of the main slide is generally directed away from the community. Should the earthflow reactivate, peak movement is not expected to be greater than 3 to 4 meters per hour.

Tetra Tech – On behalf of PRRD, for the Old Fort community

Tetra Tech is of the opinion at this time that the risk to the community posed by recent Old Fort slide movements is low. When slide movements occur, they are generally directed away from the community. East or southeast components of the movements are typically smaller-scale and slower-moving. No reactivation of the West Slide mass has been observed. Fresh onset of movement is difficult to predict and circumstances can change quickly, depending on external factors such as water ingress, changed groundwater flow patterns, weather, anthropogenic processes, etc. Despite this, should renewed movements occur, and should such movements pose a risk to the community, sufficient time to evacuate or respond would be available, provided that ongoing slide monitoring systems remain active and regularly monitored, and provided that alert/alarm notifications are distributed to us and the Regional District.

The regional district says emergency support services for lodging, food and other needs will end on Friday, July 17. A water taxi to and from Taylor will continue to run until 9 p.m. Friday, and residents must remove any vehicles remaining at Peace Island Park before that time, it said.

The regional district says all emergency water, sewage, and garbage services have been discontinued, and says it "has made arrangements to securely store related infrastructure so that it can be rapidly mobilized in the future."

This is a developing story. See more photos of the landslide in our gallery below.