Evan Saugstad: Without prey, there are no predators 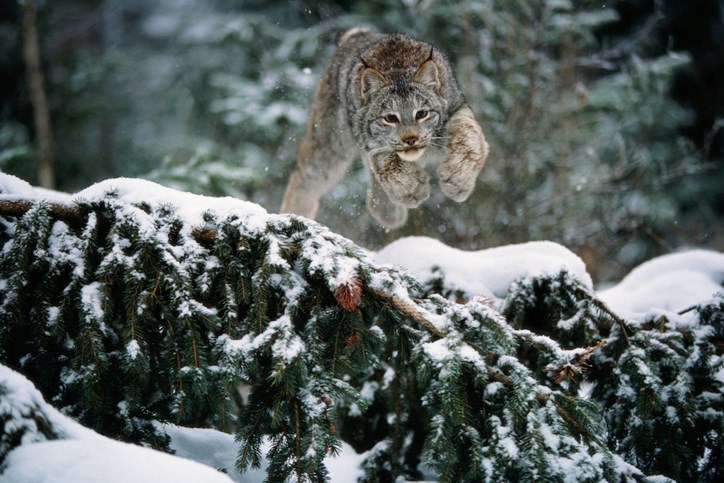 Evan Saugstad: 'Can there be lynx without the snowshoe hare? Cougars without deer? Wolves without moose? If it swims, walks, or flies, it needs to eat, and for predators, that means prey." John Conrad/Getty Images

Can there be lynx without the snowshoe hare? Cougars without deer? Wolves without moose?

If it swims, walks, or flies, it needs to eat, and for predators, that means prey.

Predators do not exist without prey and, to a point, prey cannot exist without predators. In nature’s reality, both predators and prey live best when they are in balance with each other, their food supply, and environmental conditions. And before you call this incorrect, yes, bears being omnivores can exist on a diet consisting of mainly vegetative materials, but given the opportunity will select a hearty protein meal of prey every time.

I recently attended a webinar by Dr. Valerius Geist, Professor Emeritus, life-long researcher, and expert on large mammals of North America while he discussed and answered questions on predator and prey relationships and the importance of management in our human dominated world.

Part of what Dr. Geist discusses is that predators can limit the ability of prey to exist in high numbers and create what he calls, a “Predator Pit,” also known by others as “low density equilibrium dynamics.” This means both prey and predators are stuck with low population numbers, essentially creating a large mammalian desert where it is hard to find either. If you have the time, are interested, and wish to understand more, you can view Dr. Geist's webinar here.

Reduction of predators is proven to work in breaking a predator pit cycle. But as we are well aware, not popular with those who believe no predator should be killed. Essentially no intervention in “nature” by humans.

Nothing new for those of us living here in B.C.’s north country. Arguing over the need or validity of predator management programs spans multiple generations and will not go away anytime soon.

In carefully crafted and co-ordinated campaigns against predator management, our influential Environmental Non-Government Organizations (ENGO) deliberately ignore reality, science, or history. Big money ensures they can continually broadcast and twist their reality to a misinformed yet trusting and naive public, claiming predators need help, that somehow predators can exist in conditions when their primary prey shows alarming declines or in some cases, are on their way to becoming absent.

Whether it be salmon along B.C.’s coast that our bears and orcas depend upon, ungulates in B.C.’s Crown jewels of the Spatsizi, Muskwa or Kechika that sustain wolves and bears, or in the Okanagan uplands where mule deer ensure cougars can feed their kittens, one fact is clear:

B.C.’s prey species are in trouble and need our help.

The delicate balance required to keep healthy populations of both prey and predator is once again out of kilter. And, if our ENGOs get their way, it will swing even further in favour of more predators and less prey.

Multiple big money campaigns aimed at convincing an unsuspecting public and influencing governments to stop all predator management — including hunting — proceed at a record pace, and for the most part, is knowingly being endorsed by our willing governments.

It is not rocket science to predict the outcome.

When primary prey becomes scarce, predators begin to rely more on their secondary prey as their favoured source of protein, then the third and so forth, until the day when there is insufficient prey to sustain their populations. Predator population will eventually collapse to a level that the remaining prey can sustain them, but that can mean, some prey like caribou, will disappear.

The return of our larger prey species to their former population levels can take decades, or in some cases, may not.

The twist in this reality is not just the purview, responsibility, and result of the ENGO stop hunting campaign.

We now have multiple generations that have grown up watching countless movie and television productions featuring a predator with a comedic name and the capacity to think and act like humans. A show where the hero of this movie never catches and begins eating its prey long before its heart quits beating. We also have grown up with few movies about prey, where they too have been given names and human characteristics, and they too are never shown being caught and consumed by their arch enemy, the predator.

Who doesn’t like the TV ads featuring computer generated images of baby animals frolicking together like babies in a bathtub?

We all do, but the message is not reality. That nice looking lynx cannot walk side by side with rabbit without at least trying to take a bite. That cougar will not pass-up a quick snack of Bambi, and that bear will surely do the same with lambkins.

We understand why movies are shown this way. Reality doesn’t always make for the best story, nor is it something that young children should see. But in reality, we have trained multi-generations to now believe that nature’s reality is not the truth, and that needs to be corrected.

Hunters for BC – SCI’s program “Without Prey, there are no Predators” aims to begin changing B.C.’s narrative to one that brings a sense of sanity to the conversation about the relationships between prey and their predators; one that ensures B.C. once again returns to the place that was once known for our abundance of wildlife and not the current forested desert.

This program and those coming from organizations such as the Wild Sheep Society of BC (WSSBC), North Peace Rod and Gun Club, or Guide Outfitters Association of BC (GOABC) all have their own outreach to try bringing a bit of education and the same sense of reality to the management of prey and predators in B.C. Please join with us and support these types of organizations to the level you can.

Hunters, trappers, fishers, even those who may not do any of this but still enjoy the fruits of the hunter and fishers labour, join together, speak up and out, and work to get back our diminishing prey, and in some cases, replace what is already lost.

Evan Saugstad: Wildlife management in B.C. – Is it effective in our northern wilderness?
Mar 4, 2021 9:55 AM
Comments