Freedom of belief shouldn't be weaponized to undermine other Charter rights

Re: 'MPs of all stripes concerned with summer jobs value test,' June 27, 2018 I am writing in response to MP Bob Zimmer’s reply to my article critiquing his opposition to a controversial eligibility requirement for the Canada Summer Jobs grant.
Jul 4, 2018 12:30 PM By: Alaska Highway News Staff 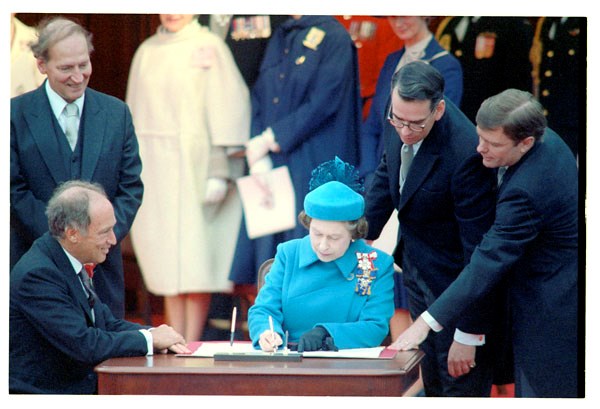 Signing of the Proclamation of the Constitution Act, 1982.Library and Archives Canada

I am writing in response to MP Bob Zimmer’s reply to my article critiquing his opposition to a controversial eligibility requirement for the Canada Summer Jobs grant.

Zimmer’s right about one thing: this issue is ultimately about our fundamental freedoms as Canadians. But he ignores the fundamental right to be free from discrimination based on sexual orientation, or gender identity or expression, and he ignores women’s right to choose.

And he’s got something deeply wrong. The right to belief should not be weaponized to undermine other Charter rights.

Whether the attestation interferes with groups’ right to hold beliefs or to practice their religion is one of many complex questions courts will consider in upcoming constitutional challenges. Constitutional experts have made arguments for both sides of this controversial issue. Zimmer has presented only one side.

Daphne Gilbert, Associate Professor of Law at the University of Ottawa, explained in a February article on Rabble that the grants “are not open to organizations whose sole core mission is the defeat of equality rights earned by women, LGBTQ people…This is not discrimination on the basis of either religion or expression, for they are still allowed to carry out that anti-equality work. It should shock Canadians that they expect the government or taxpayers to fund it."

If courts determine that the attestation interferes with organizations’ right to hold beliefs and to practice religion, they will then consider whether is it a justifiable limitation of their rights, in order to protect the rights of others.

Courts have ruled before in favour of limiting some Charter rights in order to protect the rights of those at risk of discrimination. In an important early Charter case, former Chief Justice Dickson wrote: “In interpreting and applying the Charter I believe the courts must be cautious to ensure that it does not simply become an instrument of better situated individuals to roll back legislation which has as its object the improvement of the condition of less advantaged persons.”

If Zimmer is so interested in fundamental freedoms, why do only the rights of faith-based groups (and gun owners) feature on his agenda?

There are many big names on both sides of this issue. Zimmer makes much a of a few non-conservative MPs with concerns about the attestation, but a conservative motion against it was defeated 207 to 93. One NDP member supported the motion, but 37 NDP members voted against it. Executive Director of the B.C. Civil Liberties Association Josh Paterson spoke out with concerns about it, but the organization staunchly defends reproductive and LGBTQ+ rights.

In an open letter to Prime Minister Trudeau in January, eighty pro-choice and human rights groups, including Oxfam Canada, applauded the attestation, stating that “these new safeguards are designed to ensure that federal grant monies are not used to fund discriminatory activities that undermine human rights, including as they relate to bodily autonomy, sexuality, gender identity and expression.”

Other groups signing the letter included Action Canada for Sexual Health and Rights, Catholics for Choice, the Abortion Rights Coalition of Canada, Planned Parenthood chapters, the Canadian Association of Elizabeth Fry Societies, and the Canadian Union of Public Employees (CUPE).

What do Canadians have to say about this? An Ipsos Reid Institute study of a representative sample of 1,512 Canadians found that 50% of respondents did not support the attestation. But when presented with two hypothetical scenarios, they overwhelmingly opposed the use of public money to fund anti-abortion activities.

The first scenario asked if respondents supported a group morally opposed to women’s right to choose receiving public funding for activitiesnot related to anti-abortion advocacy. 73% agreed that they should be eligible. The second scenario asked if anti-choice organizations should be eligible for summer job grants for anti-abortion advocacy, and only 37% agreed that they should receive public funding.

If Zimmer were truly so interested in fundamental freedoms, he’d propose a solution that protects everyone’s Charter rights. I won’t hold my breath on that one.

— Amy von Stackelberg advocates for social and political change, which is the dictionary definition of the word “activist”.