Into The Box: spit out a floater, and hope for a doink - it's disc golf time

Disc golf is by no means a new sport — get out into the summer air and have a toss.
Jun 2, 2021 9:19 AM By: Dillon Giancola
Previous Next
1 / 1 Dillon Giancola throws a drive during a round of disc golf at the course in Pouce Coupe Park. Rob Brown
Expand
Previous Next

Watch out for the blow through on the straddle putt.

Disc golf is by no means a new sport — most people by now are at least familiar with the idea of disc golf or have seen the different shaped discs around at stores — but it’s far from being in the mainstream.

And yet, the sport continues to pick up steam and become more and more popular. It seemed like it was already the fastest growing sport around — though pickleball players would beg to disagree — but it’s grown at a whole new level during the pandemic.

The same goes for my experience with the sport. Originally trying it 10 years ago with a roommate, I never could take it too seriously because of the players who carried their disc bags around and said they liked disc golf more than actual golf. I also wasn’t very good.

I’ve tried it here and there in the past couple years before really diving in the past month. And by diving in I mean I’ve played four rounds, but that’s more than the number of rounds of real golf I’ve played. Plus, it didn’t cost me a cent.

Sure, it’s grown quickly because of how easy it was to play during the pandemic, but it’s the perfect leisure activity for normal times as well. Newcomers may face a bit of frustration at first when their golf game doesn’t translate to their disc game, and may wonder how some people can throw a disc so darn for (I’m talking about myself).

But it’s easy to get into, easy to play, and incorporates a walk which only the best sports do. Plus, here in the Peace Region we are blessed with an unusual amount of courses (there are courses in Dawson Creek, Pouce Coupe, and Fort St. John), compared to areas of similar size, and even cities a lot bigger, such as Edmonton.

If you’re not familiar with the sport, it’s simple. You have a set of three discs (a driver, a mid-range, and a putter), and you play a series of holes, distanced 200 to 300 feet, trying to see how many throws it takes to get the disc in the metal basket (there’s nothing that makes a more satisfying sound by the way).

So, if you want to give it a whirl, buy yourself a couple discs and I’ll see you at the course! Discs are available for purchase at The Northern Toy Box.

Disc golf is an excellent sport to pick up as a family. It’s also a great way to meet more of your surrounding community. The Dawson Creek club normally has a weekly league night, where players can record scores via the UDisc app to win a weekly prize, and compete in several annual tournaments throughout the region.

Though the club has been unable to hold club night’s the last 12 months, restrictions loosening could see them start up sooner than later.

“We are hopefully as a club about this year. We want to do more course development, and it’s a perfect sport to meet the Covid guidelines.” 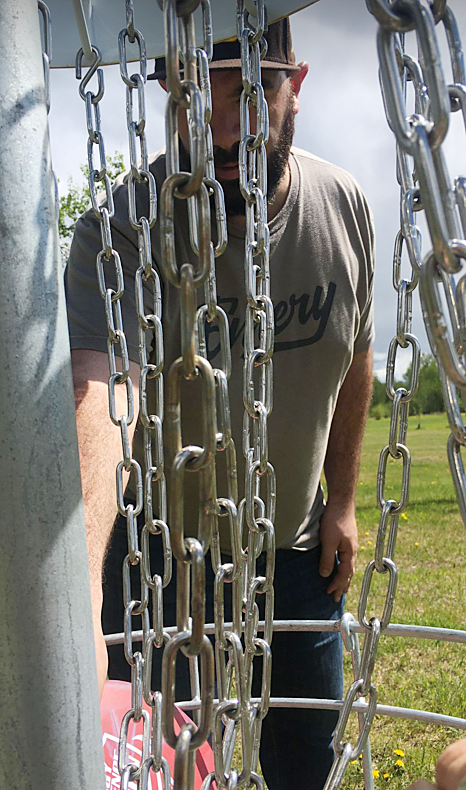 After making a miraculous birdie "putt". By Rob Brown

Disc Golf Club members Jaron Neufeld, Andrew Ho and Kyle MacDonald have donated discs to the Pouce Coupe Public Library, to be loaned out to the public.

The Pouce Coupe course, located at Pouce Coupe Park, opened for the season May 19, and the lending program is now open. From Monday to Saturday, those interested can rent bags of two discs each from the library, which will include instructions on how to play the game.

Have a new game for Dillon to try? Email him at sports@ahnfsj.ca