Two children lost their lives in a tragic fire in 1942. It was then that a group of citizens organized and planned to give freely of their time and effort when called upon in emergencies
Mar 16, 2021 12:47 PM By: Larry Evans 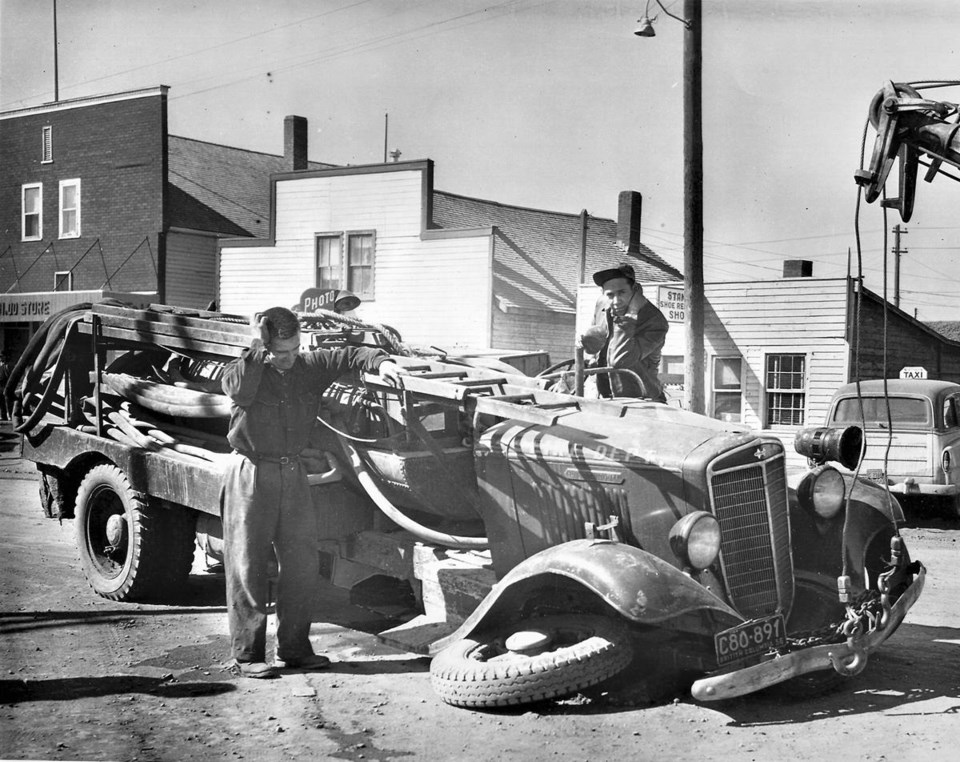 I was very pleased to see that the Fort St. John Firefighters were restoring Fort St. John’s first fire truck, or Unit One as it was known when I joined the department. The Fire Deptartment of the time had acquired a 1952 American LaFrance when Aennofield amalgamated with Fort St. John. The ‘52 LaFrance had become the first line pumper and the new ‘56 Unit 1 was the second line pumper.

In 1992, the Fort St. John Fire Department celebrated its 50th anniversary. This was based on the date of a tragic fire that happened in 1942 where two children lost their lives. It was then that a group of citizens became organized and planned to give freely of their time and effort when called upon in emergencies such as fires.

The first fire truck was manufactured by Mr. Bert Bowes and Mr. Braden Herron. The front part of it, as I was told, was a front end of a half track that was in the Bedeaux Expedition. It was in service until 1956 when George Broadhurst and Larry McLeod were returning from a fire. On main street, halfway between 102 Street and Mackenzie Street (100 Street), the axle broke on the truck. Even in those days there were cameras around when you didn’t want them. In the picture that was taken, it shows George and Larry looking puzzled at the truck, and the year on the licence plate was 1956.

I don’t know who rattled whose chain, but approximately three months later Fire Chief George Broadhurst drove into town with a brand new fire truck. This truck was a 1956 Ford with an American LaFrance fire pump on it, and was state of the art equipment. This was the first real fire truck and was referred to as Unit One.

In 1958, the Fire Department met with the Village Council asking for financial assistance for the group. Up until this time it had been strictly volunteer, with assistance only from the town for the cost and maintenance of the truck. The firemen asked for some remunerative acknowledgement for the time they had put in for practices and a small stipend for the Assistant Fire Chief, Helmut Mack. Mr. Mack was also President of the Fort St. John Fire Department with Alvin Hosker, Secretary, and Lloyd Redford as Timekeeper.

The organization was also seeking a grant of funds to enable the fire department to get on its feet. This was agreed on and it was also decided at this meeting that all firemen must return to the Fire Hall following a fire or no pay would be allowed them. Regular practices were held every other Tuesday night at 7:30 p.m. with a meeting following. 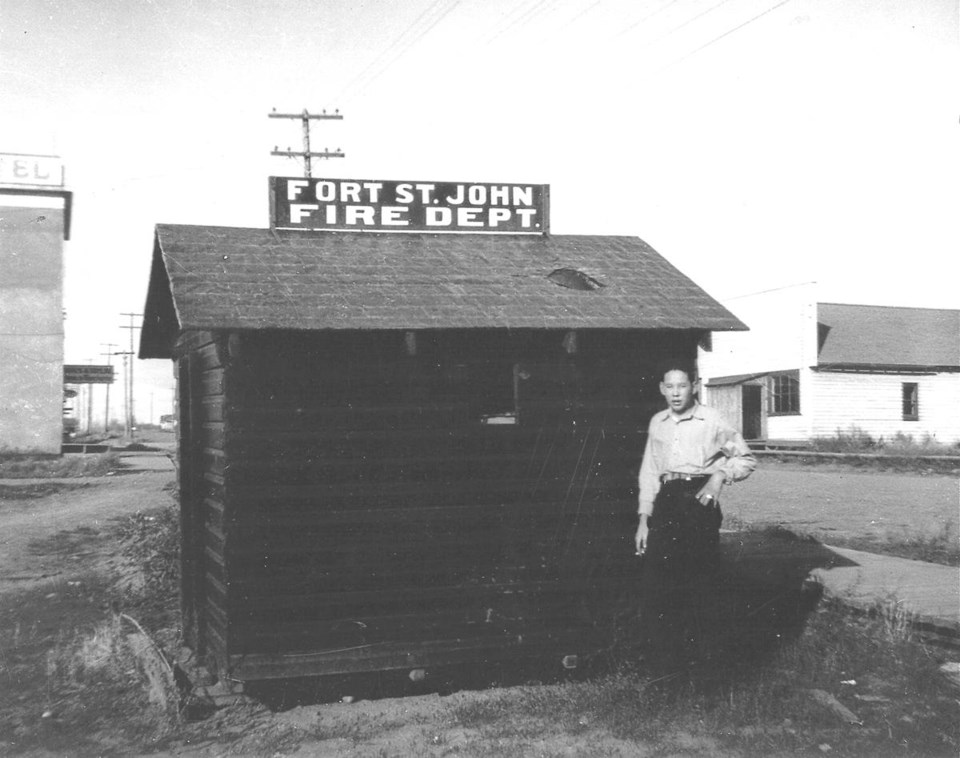 Larry MacLeod in 1947 where the old Fort Hotel lot is today. By Courtesy Larry Evans

(A) A report on each fire to be given to the Village Clerk, preferably within 48 hours of incident;

(B) Two practices per month, with a program planned on a three month basis. A copy of the training program to be handed in quarterly;

(C) Practices to be held on regular nights so each volunteer will know the nights well in advance;

(D) Reports on practices once a month and showing the attendance on training nights. Payment of stipend based on report as submitted each month;

(E) The fire truck or equipment shall, under no conditions, be allowed to cross the town boundary for the purpose of fighting fire;

(F) On holidays and Sundays, especially in the summer, steps should be taken that not too many volunteers leave town. There should be enough volunteers at all times within hearing distance of the siren to handle any kind of fire (no radios or pagers in those days!);

(G) A report every three months from the Fire Chief concerning the state of affairs of the Fort St. John Volunteer Fire Department.

He also told the Fire Department that with the change to dial phones in town a new setup for sounding the alarm for a fire had to be arranged. Council felt that they could not afford to have a full-time man at the fire hall 24 hours a day to handle this job and would take advantage of an emergency set-up by the telephone company.

Six telephones were installed in different places around town and all six of these would ring when the special emergency fire number was called. The first person to answer one of these phones would activate the siren by pushing a switch at the side of the phone. This person would then rush to the fire hall to notify other firemen of the location of the fire. 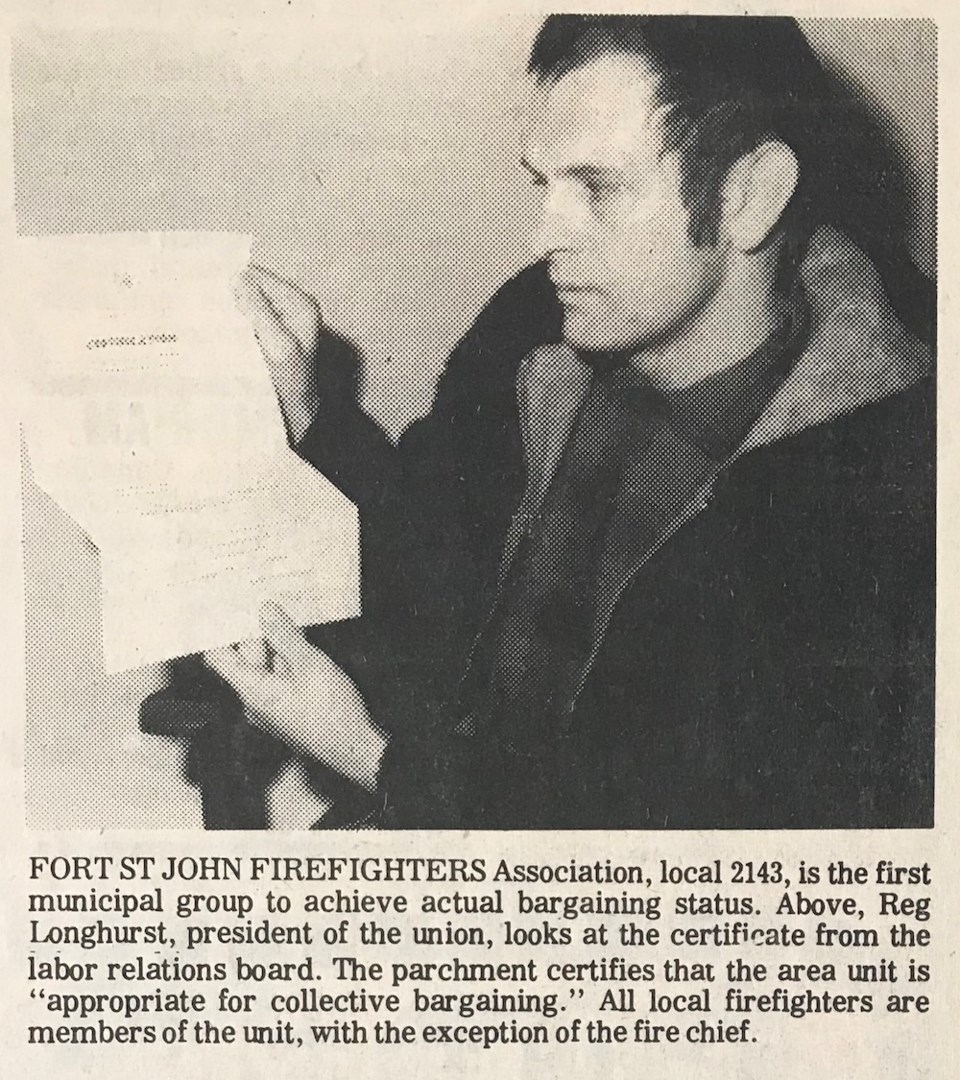 Wives were put into play using a “fan out” system of notifying each fireman’s house to ensure they had heard the siren and to pass on information like the location of the fire. Mrs. Gordon (Marlene) Bennett once explained that she would receive a call from the Fire Hall then would hang up and phone each of the numbers on her list to relay the emergency message. Many fireman’s wives were called to this kind of duty when there was a fire. The six phones were to be installed in the town hall, RCMP office, Fire Hall, etc. However, with Acting Fire Marshal Alvin Hosker opposing a phone at town hall, the other phones were installed in Fire Chief George Broadhurst’s house as well as two firefighter’s houses.

Mayor Frank Spicer, who had chaired the meeting with the Fire Department, held out hope for a new Fire Hall for the Town in the near future. Alderman Braden Herron elaborated on the plans for a new Fire Hall stating that he realized that firemen were not satisfied with present quarters, which were located in a small bay of an old public works building, and that Council wasn’t satisfied either. Mr. Hosker requested that consideration be given to purchasing an inhalator, books for a fire department library, and membership with the National Fire Prevention Association for the department.

Fire Chief George Broadhurst thanked the Council for calling the meeting and stated that it showed the Council was aware of the “growing pains” of the Fire Department. He felt that the institution of the system of reports would put the department on a more business like basis. He reminded Council that when the new Fire Hall was built they would have to consider the hiring of a full time paid fire chief whose duties would not only be to fight fires but also inspect premises, check clean-up, issue permits and generally work on fire safety.

Certificates were issued to firemen who completed the course of instruction laid out by Provincial Fire Marshal’s office. Certificates were presented by Mayor Spicer to the following; Carl Lutz (who was to become the first paid Fire Chief and my first Fire Chief), Morris Smetaniuk, Doug Coates, Rollie De Tonnancourt, Jim Duncan, Lloyd Redford, Floyd Readman, Gordon Ljuden, George Broadhurst and Alvin Hosker. Larry McLeod, who was still active with the department when I joined in 1972, also received a certificate.

And so it goes. Over the years the Fort St. John Fire Department witnessed many changes. The ambulance came into the Fire Hall in 1972 and left in 1997 which was a span of 25 years. All career firefighters of the day were cross-trained in firefighting and as emergency medical attendants. From its beginnings to its present state the Fire Department strived to keep abreast of the changing times.

I am proud to have been a part of this organization and I’m also very proud of the Fire Department we have today.