Larry Evans: As hospitable as a Western welcome

When I was growing up in Fort St. John, up town was 100th Street and 100th Avenue, and while there were stores around this area, it was on this street and avenue that most of the business was done.
Feb 6, 2020 6:48 AM By: Larry Evans 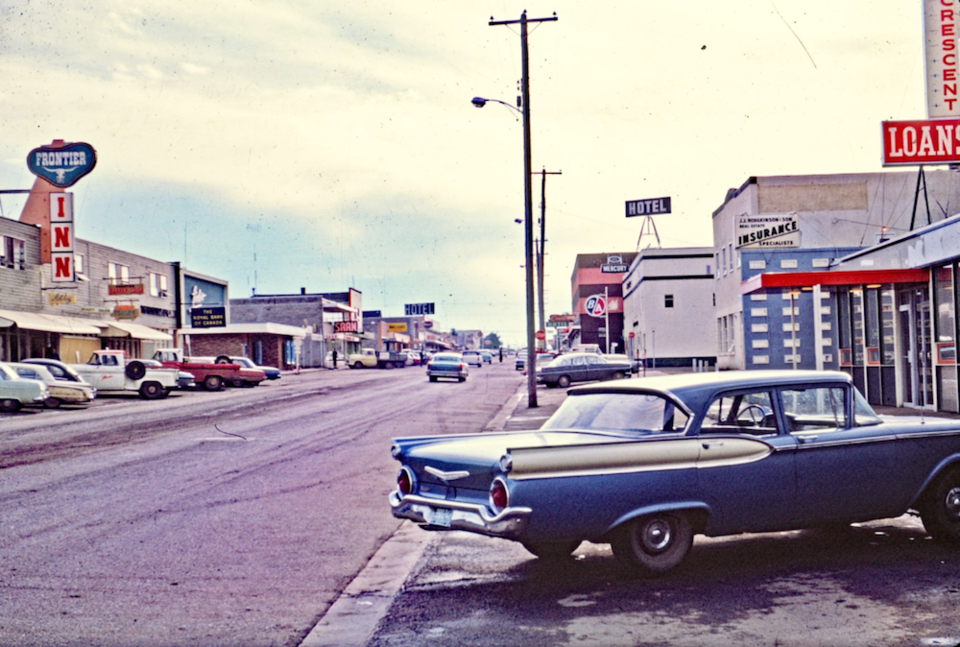 When I was growing up in Fort St. John, up town was 100th Street and 100th Avenue, and while there were stores around this area, it was on this street and avenue that most of the business was done.

My association with the Frontier Inn began before it was built. In early spring of 1957, they had dug the basement for the Frontier, but before they could start to build the rains came. People that were here then still talk about the summer of ‘57; there’s been wetter years, but 1957 I’m sure was one of the top three wettest years on record.

Of course, the hole began to fill with water and halted any more work of any kind on the site. This is where Kenny and I come in. This, to us, was the ultimate swimming hole… so, one day we tried it out. There were other kids involved but apparently Mr. Chiulli from Dave’s Garage could only identify us, which prompted a call to our mothers who were soon on the scene. They explained in no uncertain terms that this was not safe and if we did it again life as we knew it would halt.

We took this to heart and did not try it again although we watched from the sidelines as bigger kids used it.

I was also at the demise of the Frontier as it burned down in the early 1980s, I believe. I remember that it was the biggest fire I had been to since the start of my career with the fire department. One thing that stands out in my mind is the stack of beer that was in the basement. A beer strike was on and they had stockpiled enough beer to get them through.

The fire department was kept busy hosing this stack down as the owners were very concerned about it. In the end, they did manage to salvage about three quarters of it. The following story is about the grand opening of the Frontier Inn. Enjoy.

The beautiful new Frontier Inn, which officially opened its doors on January 26, 1959, was Fort St. John's newest and finest hotel. It was purchased from the McMahon-Marwell interests at a cost of $750,000, and was another in the large Park Hotel chain also with hotels operating in Dawson Creek, Grande Prairie, High Prairie, North Battleford, Lethbridge, Terrace, Prince George, and Edmonton.

A startling fact was that already the hotel was too small and management was considering adding another wing which would make available 30 more rooms and a shopping arcade. Also, the half acre on which the property was located at the corner of Centre (100th) Avenue and 101st Street was purchased at a cost of $43,000 four years prior, with the value doubling in value in those four short years.

With 41 rooms and baths, spacious banquet halls in the basement, special service kitchens adjoining, the Frontier was the last word in design and comfort. The beverage room (bar) was the largest north of Edmonton and could seat 375 people. The parking lot could handle 200 cars.

The lounge boasted an ultra-smart décor, with simulated cowhide upholstery in black and white, a genuine half-saddle of hand tooled English leather was a focal point in the room, which took its name from this novel arrangement… the Saddle Room. The dining room was carpeted elegance, with gleaming linen, a room divider for added privacy, planters and lovely lights. The dining room was called the Ranch House. The coffee shop was a warm and friendly little café, done in cheerful flamingo colour and soft grey, with banks of stainless steel equipment gleaming behind the counter. The coffee shop was called The Corrall.

The fine hotel was open for business because of the interest in Fort St. John of the McMahons. W.G. “Bill” McMahon purchased the property four years prior from Howard Travis and Moore Equipment. McMahon Construction did the excavation and got the steel up. The architect who designed the building was retained by Mr. McMahon, he was Bill Noppe of Vancouver.

About this time, the tight money era had arrived and when Bill could not follow through on his plans for financing the big hotel, his father, Mr. Frank McMahon, took over. Frank brought Marwell Construction into the picture as contractors and together these enterprising businessmen completed the hotel.

It had been a tremendous addition to the town of Fort St. John, undoubtedly being responsible for a face-lifting all around. Even the signs indicating the dining room, coffee shop and so on had carried through the ranch motif.

The Park chain of which the Frontier Inn was a member, was owned by Eugene Pechet and Associates of Edmonton. Ross Henderson was manager and vice-president of the Frontier Inn when it opened and held an interest in the company. He was with the RCAF for four years. He then was employed with the Toronto-Dominion Bank in Edmonton for 17 years. When he left the bank as branch manager he then joined the Grande Prairie Park Hotel as manager, then came the transfer to Fort St. John when the Frontier Inn was opened for business.

R.J. (Bob) Harvey was the catering manager at the Frontier Inn. He came with his wife and two year old daughter from Lethbridge, Alberta. Bob’s career began in the kitchen of the Desert Hotel in Spokane. He worked at this while taking a mechanical drafting course. However, the drafting course lost its status to the salads. He later took training with the Canadian Food Products, working in the food industry for nine years prior to coming to Fort St. John. Mr. Harvey was a swimmer, holding three championships both in Canada and in the U.S., and also had a teaching certificate.

George Alexander was assistant manager at the Frontier Inn. He was born in Alberta and was with the RCNVR during the war as a wireless operator. He was a farmer turned hotel operator, farming for 17 years prior to his work in the hotel industry. He managed the Andrew Hotel in Arden and the Waldy Hotel in Leduc before coming to Fort St. John to assist with the management at the Frontier Inn.

Mr. Alexander brought with him his wife and two sons who loved hunting, fishing and outdoor sports and felt he chose the right spot to enjoy these to the fullest.

William “Bill” Radley, who was a resident of the district for more than 30 years, acquired an early interest in the hotel business as the owner-operator of the Rolla Hotel from 1936 to 1939. In addition to having an interest in the Frontier Inn, he also had an interest in the Park Hotel in Dawson Creek. Mr. Radley also operated the Dawson Tire Company, with branches in Fort St. John, Grande Prairie, Grimshaw, Whitehorse, and Fort Nelson. He was married with two daughters and two sons.

Jim Radley, son of Bill Radley, also had an interest in the Frontier Inn. He was educated in Dawson Creek where he began a career in the welding trade. Later he joined his father in the tire business where he became a director. He was chairman of the Tourist Bureau Committee of the Chamber of Commerce at the time of the building of the Frontier Inn. He also is married with three small children.

Jack Carlson was manager of the cocktail lounge at the Frontier Inn. He came from Vancouver where he had been bar manager at the Cave Supper Club. His career began when he worked at the Ritz Hotel in Vancouver. He opened the first bar in the Peace River block at Pouce Coupe. He also opened the Condill cocktail lounge in Fort St. John. He had worked in many places in Alberta and B.C. so seemed to have a well qualified opinion of the new hotel, remarking that it was one of the nicest hotels he had ever seen and said that everyone who worked at the hotel were swell! Jack came to Fort St. John with his wife and three small children.

Upon opening, the Frontier Inn had commercial space available for rent. The first business to move in was Frontier In Beauty Salon, operated by Anne Eng and Evelyn Myram. Anne had received her training in Vancouver, and had owned her own salon in Vancouver called Curl ‘n Set. Evelyn had managed a shop in Enderby. She met Anne at her shop in Vancouver, where they decided to open the shop in Fort St. John. The ladies had planned to keep up with all the latest methods by attending conventions in Vancouver, Seattle and Edmonton.

Many other businesses eventually called the Frontier Inn their home, including the first Royal Bank! But it all came to an end with the fire that destroyed the building.