Knox McCusker surveyed all over the North Peace and suffered the vulgarity of hot weather, snowfall, and noseeums
Apr 27, 2021 10:04 AM By: Larry Evans 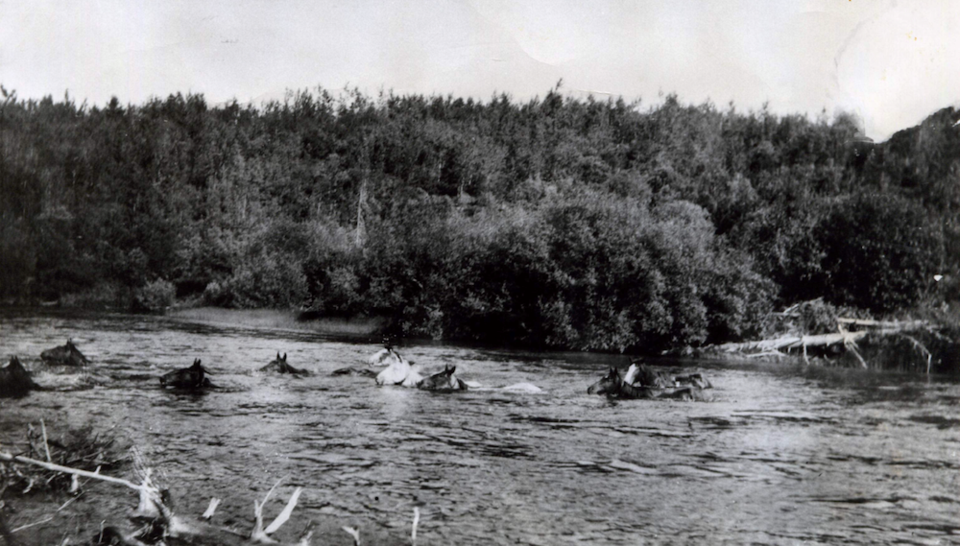 The years 1911 and 1912 marked the beginning of extensive survey of land in the North Peace River country. This continued the system of survey of Dominion lands, which had worked its way across the Prairies and through Alberta. Base lines were run as far as the west boundary of the Peace River Block. R. Rolfson, D.L.S., ran the 22nd base line, which crossed Boundary Lake, Cecil Lake, and Charlie Lake. This work continued until 1917 and was taken up again by Knox F. McCusker, D.L.S.

Throughout the years there were many surveyors working in the Peace River Block, probably the most famous was Duncan Cran whom Knox McCusker worked with periodically. The following is a story of Knox McCusker, who is buried in the Taylor Cemetery next to the Church of the Good Shepherd. His tombstone is very unusual, as it’s a replica of a survey mound! It’s shown in the photo below, and I’m curious as to who might have constructed it.

McCusker surveyed all over the North Peace and suffered the vulgarity of hot weather, snowfall, and noseeums. His whole survey party once shaved their heads bald so they could be plastered with pine, tar and grease to keep the noseeums from biting. While it was hard work it was always completed and we owe these men a debt of gratitude for their hard work that was done over the years.

Knox Freeman McCusker, also known as “Mac”, was the son of the late Reverend and Mrs. McCusker, and was born on April 6, 1890 at Hawkesbury, Ontario. He received his education at the Gault Institute, Valleyfield, Quebec, and Queens University.

In 1909, he joined the staff of the Topographical Surveys Branch, Department of the Interior, and was commissioned as a Dominion Land Surveyor (D.L.S.) in 1914. He left the Federal Government service in 1931 but returned to it in 1944 in order to undertake the survey of the boundaries of the Alaska Highway right-of-way across the Yukon Territory. From 1950 until his passing, he was in the employ of the Department of Public Works, Edmonton, making subdivision and other surveys in the Peace River Country.

His work with the Topographical Surveys Branch included initial meridian, base line and subdivision surveys, and exploratory mapping. In 1927 he guided officials of the Marland Oil Company in prospecting an area to the west and north of Fort St. John, and from the information gained drafted the original Hudson’s Hope eight mile to one inch map sheet. 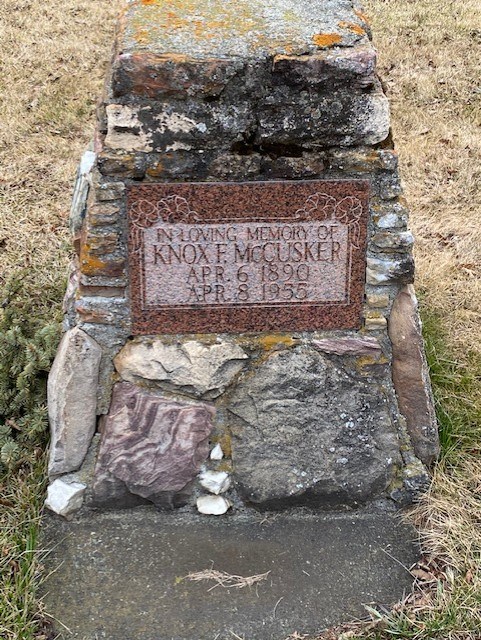 Knox McCusker is buried in the Taylor Cemetery next to the Church of the Good Shepherd. His tombstone is very unusual as it’s a replica of a survey mound!. By Larry Evans

In the early days, when the Nelson Trail was chopped through from Charlie Lake to Fort Nelson, Knox McCusker was one of those active in the survey, assisting surveyor Mr. Knight.

From 1931 to 1944, besides attending to his extensive ranch at Fort St. John, he undertook the guidance of various exploration and hunting parties into the Liard and Dease River areas and on up into the Yukon. Among these were the expeditions of the late Dr. Norman Henry and Mrs. Mary Henry of Philadelphia, whose purpose was to study the geology and flora of this little known country. It was on one of these expeditions that he visited and located the “Tropical Valley”. During some of the Depression years he and companion, Glen Minaker, acted as guides for hunting parties organized by wealthy Americans. In 1935 one such venture brought them from Fort St. John to McDame Creek to the Pacific Ocean. That autumn they read of a proposed highway to connect Alaska with continental United States.

McCusker’s and Minnaker’s interest and knowledge of this vast territory in northwestern Alberta and northeastern British Columbia was invaluable. This was because of the planning of the Northwest Staging air route and the Alaska Highway, both wartime projects of high priority. McCusker and Minnaker found themselves busy guiding American engineers in location of work, for a pilot road, some 500 miles through the wilderness. Dog teams were employed on occasion due to the harsh winter conditions. Mac was awarded the Certificate of Merit from President Roosevelt and the United States Public Roads Administration for his contribution to continental defence. From it, his fame as an explorer and “bushman” spread far beyond the bounds of Canada.

Mac married Gwendolyn D. Elliott in May 1944 in Edmonton, but no known children came from the marriage. He was a member of the Presbyterian Church at Fort St. John, a true Christian with wide sympathies and a kindly, humorous disposition which endeared him to his many friends across Canada. Knox McCusker passed away suddenly on April 8, 1955.

I’d like to acknowledge the book The Peacemakers of the North Peace for the reference on this story and to add this book is available at the Fort St. John Museum.