Seeing the ongoing destruction at Bear Flat by BC Hydro has compelled me to turn to one of the few legal weapons we are left with; the pen (or computer).
Mar 22, 2017 10:42 AM By: Alaska Highway News Staff 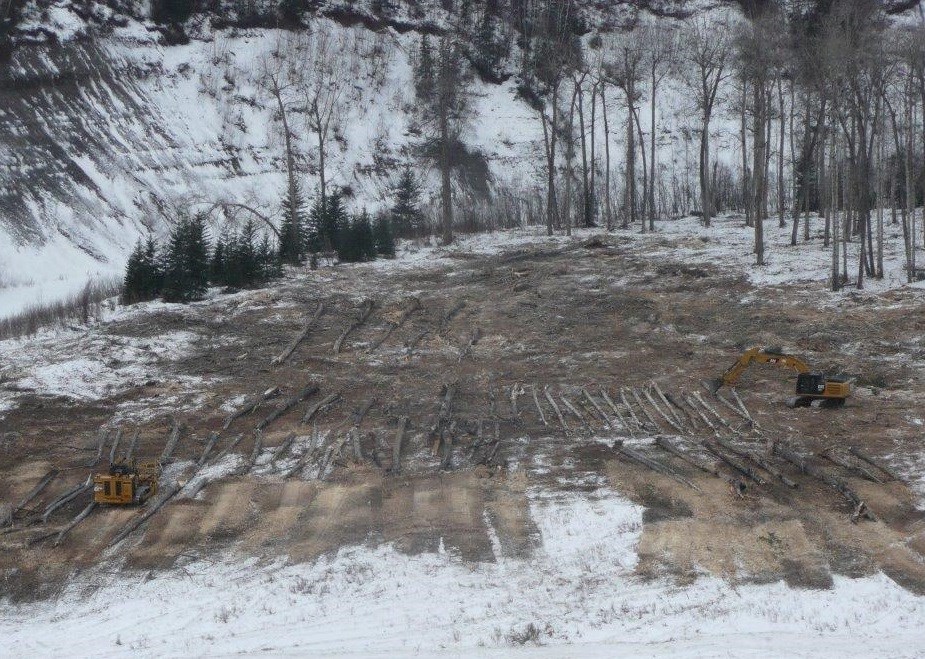 Seeing the ongoing destruction at Bear Flat by BC Hydro has compelled me to turn to one of the few legal weapons we are left with; the pen (or computer).

BC Hydro continues to push the Site C dam forward under orders from Christy Clark in an attempt to “push this past the point of no return,” and right now that includes clearing for the reservoir at Bear Flat. I say clearing because there is very little logging taking place. The use of mulchers is the weapon of choice for them. For example, the photo shows the Cache Creek flat below our house where no merchantable timber has been harvested. Instead, they have sent in a fleet of mid-sized mulchers to mulch up everything they could tackle. Then they have a track hoe push over the large cottonwood trees and poplars, and it lines them up for a monster mulcher on tracks to very slowly grind them up into mulch. Some of the cottonwoods are so large that it requires multiple passes over the tree to completely mulch, and the mulcher moves so slowly, you need to watch the tracks to tell if it is actually moving. It takes around 30 minutes for this machine to do one large cottonwood tree. That machine burns around 1,000 litres of diesel fuel per shift. If there is a more expensive and dirty way to clear the valley, BC Hydro has not yet found it. Those mulchers are literally mulching dollar bills. Furthermore, there is no value added to this resource being wasted, as none is going to the mills.

We and our neighbors are heartbroken watching this destruction of our former land and surrounding valley. The creek bottom with those large trees was valuable wildlife habitat, and we chose to leave it that way. Walking through those giant trees was akin to a tour through the Sistine Chapel—only better.

We are now also watching the mulchers chew up the “moose pasture” on the south side of the highway. Further west, BC Hydro continues to clear the fringes of the incredible Watson Slough despite the fact it is not needed for the new highway realignment. The spruce timber they have logged has been processed to random long lengths that no mill will accept, so it is unclear if any value for the ratepayers will ever be realized there either. Hand fallers have been dispatched to cut down “potential raptor nest trees.” Down at Eagle Island, the two giant cottonwood trees with eagle nest have been recently hand felled. What we are witnessing brings to mind the criminal and mindless destruction by ISIS of ancient heritage sites in Syria such as Palmyra.

Of course workers are running the machines to do this destruction. We know some of these people.  We have to remind ourselves to not blame them, but we do feel a little sorry for them. Yes, people need jobs, but these are the jobs Christy Clark is so proud of creating; jobs destroying a river valley. We all deserve better than that. Having a front row seat and watching the unorganized, uneconomic, and wasteful nature of the ongoing work, and seeing just how little has been done in relation to what is yet needed to be done, we have no doubt that Site C is far from the point of no return, and needs to be stopped. Nature will heal the valley.

With the destruction at Bear Flat now becoming visible to the general public, the chorus of those voicing their outrage continues to grow. We should all be outraged.  Simply put; power from Site C is not needed, and if it was, there are better ways to provide it.

We have two simple requests; we encourage people to speak out against Site C, and to get out and vote this government out of power.