The 18-page agenda for the next few months has an assortment of hopeful-sounding ideas to rally around. But the main thing buoying spirits these days is the vaccination drive.
Apr 13, 2021 10:48 AM By: Les Leyne 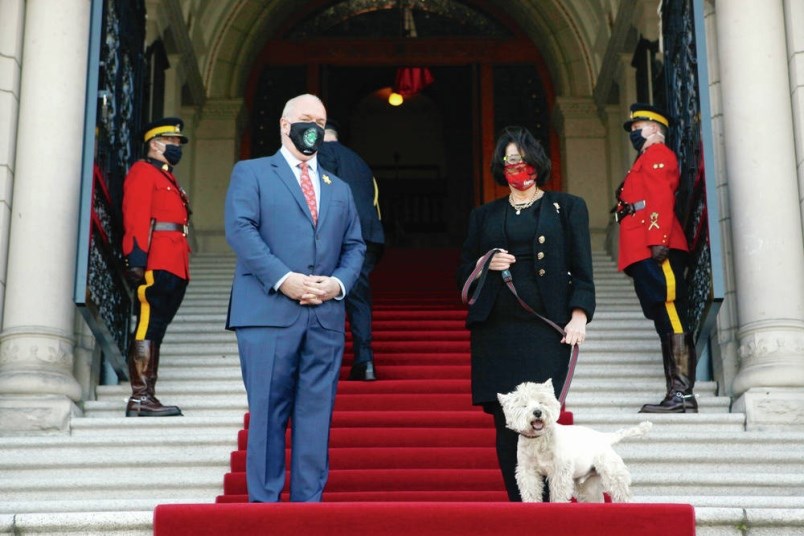 Premier John Horgan greets Lt.-Gov. Janet Austin and her dog Macduff on the steps of the legislature as she arrived to deliver the government’s throne speech on Monday, April 12, 2021. Ceremonial events were largely scaled back due to pandemic restrictions. Chad Hipolito / The Canadian Press

Those noisy, nightly pot-banging salutes to front-line ­workers were recalled wistfully in the NDP government’s throne speech on Monday.

“A year ago, British Columbians would stand on their front lawns and balconies at 7 p.m. to bang pots and pans.

“This was an extraordinary show of solidarity with those putting themselves at risk to protect the rest of us.”

That developed spontaneously across most of the province during the first wave of COVID-19. But after two successive surges, during which the number of cases and deaths has grown astronomically and the constraints on daily life have gotten more tiresome, the nightly cheer is a thing of the past.

In the speech read by Lt.-Gov. Janet Austin, the government called out to summon again that “same spirit of common purpose.”

It’s needed almost as badly as the vaccine is at this point, because B.C.’s spirit has frayed badly in the past year. Even the optimistic speech had to concede that. “Unfortunately, while the pandemic has brought out best in most people, we have also seen it bring out the worst in some.

“Hatred and racist actions have been on the rise since COVID-19 began. Anti-Asian hate crimes have increased by 0ver 700 per cent in Vancouver – in 2020 alone.”

And you don’t need a political speech to know there’s a lot more frustration over perceived infractions of health orders. The common sense of purpose has been replaced by intergenerational sniping about younger people’s gatherings.

The pandemic’s impact on homelessness — tattered encampments in parks and public places — prompted additional arguments. And its impact on the concurrent overdose crisis is even more profound. The speech noted 1,800 overdose deaths compared to more than 1,400 COVID-19 deaths since the pandemic began.

The 18-page agenda for the next few months has an assortment of hopeful-sounding ideas to rally around. But the main thing buoying spirits these days is the vaccination drive.

The number of citizens who have their first dose now stands at 1.1 million, but it will take months more work before life gets anywhere near back to normal.

The forced election’s effect on parliamentary business means Monday’s was the second throne speech in four months. It’s chilling to realize that when MLAs gathered to hear the first one on Dec. 7, it marked the deaths of just under 500 people. The count as of Monday stands at 1,513.

The encouraging developments sprinkled through the speech about things like CN Rail and Microsoft investments and film production bouncing back pale in comparison.

A few specific new measures were mentioned that will be fleshed out in the near future.

B.C. plans to take action “to end the criminalization of ­simple drug possession that leads directly to stigma and prevents people from seeking services.”

It’s not strictly provincial jurisdiction and the idea has been on the table for years. But circumstances may force some progress on making that happen.

Also promised is a made-in-B.C. shipbuilding strategy and a provincial determination to “fight to bring construction of Canada’s next polar icebreaker back to B.C. shipyards.”

That will likely require an end to the B.C. ban on criticizing Ottawa that has held during the pandemic.

As well, there is legislation coming to support the InBC Investment Corp. That could be the beginning of a new Crown corporation based on a half-billion-dollar investment fund created last September to fund growth in B.C. business.

There is also a promise to “continue to take action” on the independent report on old growth forests. It recommended important new protection for the remaining stands not already protected.

Governments always try to announce or re-announce their best ideas in the agenda-setting speech. There’s a lot more ­pressure now to make them work.

There are indications across Canada — particularly in Alberta — that people have reached the snapping point, perhaps more elsewhere than here.

But restoring unity of purpose is as important here as anywhere else. How provincial health officer Dr. Bonnie Henry stickhandles her health orders through the last crucial phase will be much more important than the speech details.