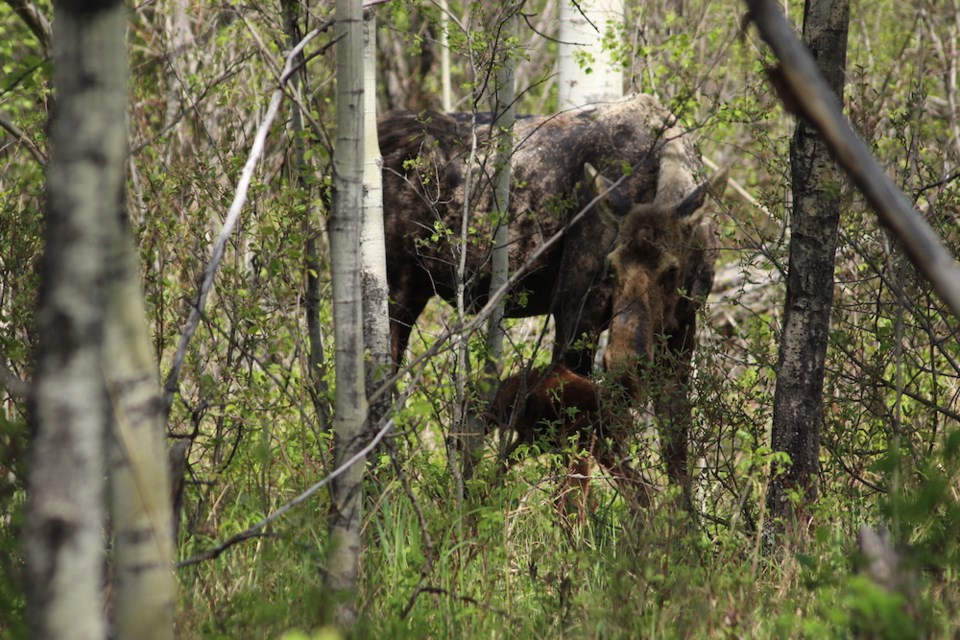 Since 2017, a cow moose has calved in the woods below Ruby McBeth’s home in Baldonnel. Shown here are Dorothy and her calf Francis.ruby mcbeth

Each year since 2017, a cow moose has calved in the woods below our house at Baldonnel.

In 2019, Lorne recorded in his diary for May 22: “I started around my 3-D course but cow moose with calf on it about half way round. I think she just calved. I backed off and quit. Same moose as last two years – calved in same place.”

We thought she had deserted us this year, but then on May 27 there she was again half way through Lorne’s archery course — with her calf, of course.

Since she has obviously adopted us, we decided we had better name her. Lorne has called her Dorothy and her calf Francis, or Frances not sure of the sex of the calf and not about to check it out!

Lorne opened a gate into the pasture so that the calf can get out when mom is ready to leave. Mama Dorothy has no problem with fences.

I had a tube of frozen tart shells in my freezer and thought I would try making butter tarts. I found a recipe in the TOLKO cookbook. The tarts were yummy.

There are other recipes I have discovered because of items in my house. I had quite a few packages of frozen green beans. A recipe in my Company’s Coming soup and sandwiches book provided a recipe for green bean soup, which has become a favourite. It includes corned beef, of which I had a can.

Another Company’s Coming book called Gifts from the Kitchen gave me a new supper recipe called Tuna Pineapple Casserole. I found this recipe when I was wondering what to do with cans of pineapple in my store room.

Next week I will tell you about the bread recipes I discovered to use ingredients I had on hand.

A recent take on Leonard Cohen’s Hallelujah is performed by the virtual choir of Roedean School in Johannesburg, South Africa. This all-girls’ school explain themselves as “apart in uncertain times, but together in spirit and song.”

Quote of the Week

“The intention of every other piece of prose may be discussed and even mistrusted; but the purpose of a cookery book is one and unmistakable. Its subject can conceivably be no other than to increase the happiness of mankind.” — Joseph Conrad