An ancient cave in Charlie Lake home to thousands of years of indigenous history has been designated a national historic site by Parks Canada.
Aug 23, 2019 8:36 AM By: Alaska Highway News Staff 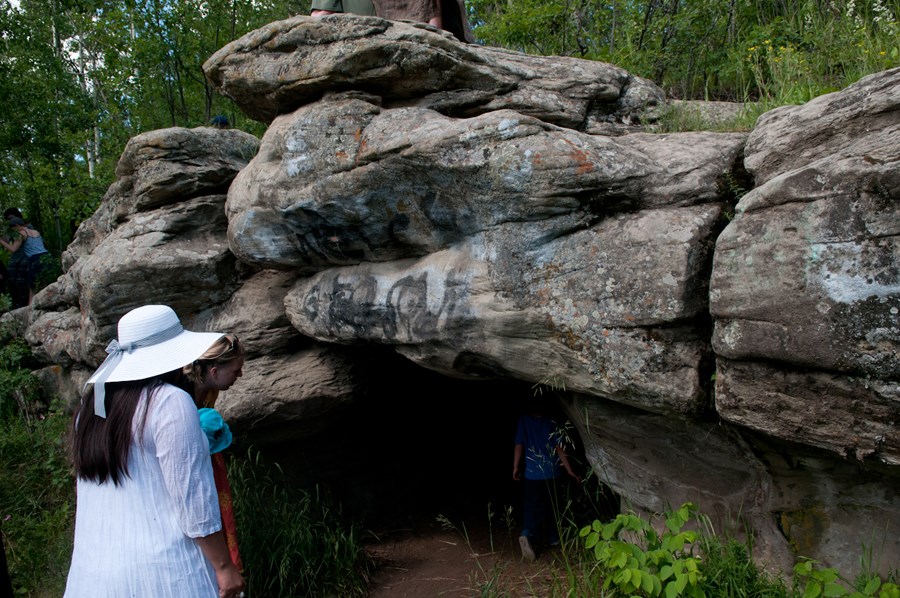 Tse'K'wa cave is small but significant. The Heritage Society is working to raise funds for a fence to protect the sacred, ancient site.

An ancient cave in Charlie Lake home to thousands of years of indigenous history has been designated a national historic site by Parks Canada.

The cave, known formally as Tse’K’wa, was one of seven designations announced on Friday to mark the 100th anniversary of the Historic Sites and Monuments Board of Canada.

"It has provided an understanding of human settlement and environmental change from the last glacial period (12,500 years ago) to 1,000 years ago. This site is in the traditional territory of the Dane-zaa First Nations, who maintain stewardship of the site and consider it a spiritual place."

Tse'K'wa means “rock house,” and though well-known to local residents and First Nations, the cave was only discovered by archaeologists in 1974, and then excavated in the early 1980s.

Among the hundreds of artifacts found were a 10,500-year-old stone bead — the oldest example of human adornment in North America — spear and arrow points, harpoon heads, as well as bones from humans and various animals including bison and raven.

The artifacts tell stories of travel patterns and ceremonial practices, and make the cave one of the most significant sites on the continent.

Local First Nations, including Doig River, Prophet River, and West Moberly bought the land with the cave in 2012. They plan to turn the site into a cultural museum.

Preliminary plans call for a cafe and gift shop, an amphitheatre and interpretative trail, and space for hundreds of repatriated indigenous artifacts from the region in need of a home to store and display.

Along with preserving the cave site and protecting it from ongoing vandalism, the museum would be part of a broader effort underway to bring more visibility to local indigenous history through culture and public art.

The museum is planned to be developed in phases over five to 10 years, a timeline that will depend on funding.

Other sites designated on Friday include the Newfoundland National War Memorial in St. John's, and the Uplands neighbourhood in Oak Bay, B.C.

Thomas Adams (1871-1940), Donald Strathearn Rawson (1905-1961), were also recognized, as were the Meshikamau-shipu Travel Route, and the German U-Boat Attacks at Bell Island.

"As we celebrate 100 years of commemorating Canadian history, I am pleased to recognize these seven people, places, and events that have helped define our country," said Catherin McKenna, the minister in charge of Parks Canada.

"Their stories represent the rich and varied history of our nation and there are still many stories to be told. I encourage all Canadians to help shape the stories we share by submitting their own nominations for national historic designation and to visit Canada's network of heritage places to discover and connect with our diverse history first-hand."