The Peace River Regional District has rezoned the site of the Charlie Lake Cave to allow for the building of an indigenous cultural museum.
May 1, 2019 11:46 AM By: Alaska Highway News Staff 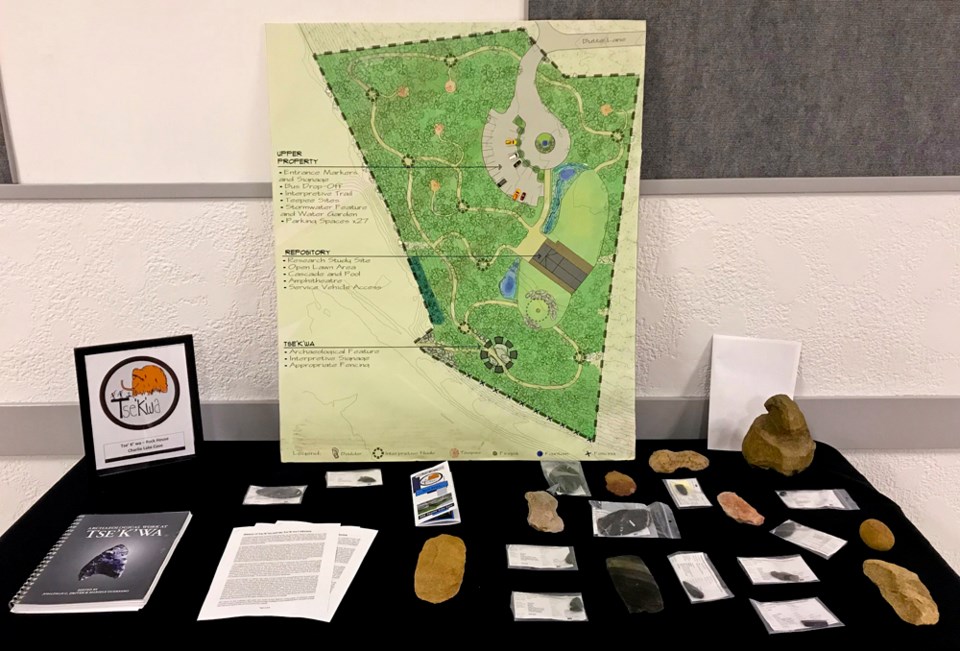 A concept plan for the Tse’K’wa Heritage Centre in Charlie Lake, with indigenous artifacts found in the region.

The Peace River Regional District has rezoned the site of the Charlie Lake Cave to allow for the building of an indigenous cultural museum.

The board passed zoning amendments for the five-acre property at 19629 Butte Lane from residential to institutional at its April 25 meeting. It’s the first step toward establishing a formal museum, expected to be a multi-million dollar development.

The museum is being undertaken by the Tse’K’wa Heritage Society, which will be asked to install fencing around the property to address privacy and security concerns from neighbouring property owners.

"For what they're developing here, there's going to be artifacts there. We would like some sort of security but also privacy for neighbours," board chair Brad Sperling said.

Tse'K'wa means “rock house,” and though well-known to local residents and First Nations, the cave was only discovered by archaeologists in 1974, and then excavated in the early 1980s.

Among the hundreds of artifacts found were a 10,500-year-old stone bead — the oldest example of human adornment in North America — spear and arrow points, harpoon heads, as well as bones from humans and various animals including bison and raven.

The artifacts tell stories of travel patterns and ceremonial practices, and make the cave one of the most significant sites on the continent, Tse’K’wa society president Garry Oker says.

Local First Nations, including Doig River, Prophet River, and West Moberly bought the land with the cave in 2012. Preliminary plans for the museum include a cafe and gift shop, an amphitheatre and interpretative trail, and space for hundreds of repatriated indigenous artifacts from the region in need of a home to store and display.

Along with preserving the cave site and protecting it from ongoing vandalism, the museum would be part of a broader effort underway to bring more visibility to local indigenous history through culture and public art.

“We know the Peace Country is well developed in all kinds of industrial development. Where is there a place where we can go to look at the local culture and have visibility to that?” Oker said.

The museum is planned to be developed in phases over five to 10 years, a timeline that will depend on funding.