This teen is beating drugs and alcohol with the help of 4-H, horse academy

Three years ago, you'd be hard pressed to get a sentence out of Braiden Markwick. The Charlie Lake teen was skipping school, failing class, drinking and doing drugs.
Jul 18, 2018 2:36 PM By: Alaska Highway News Staff 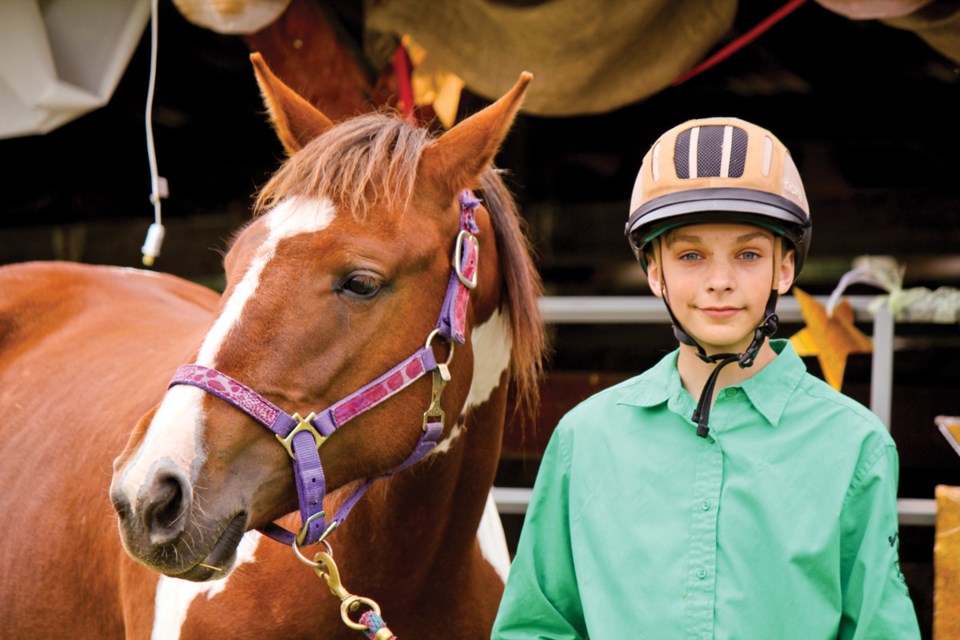 Braiden Markwick with Sweetpea, a sorrel paint filly he saved from slaughter at a meat auction last year for $325.Matt Preprost

Three years ago, you'd be hard pressed to get a sentence out of Braiden Markwick. The Charlie Lake teen was skipping school, failing class, drinking and doing drugs.

But Markwick has been slowly turning his life around, learning to overcome his addictions and anxieties through the healing power of horses.

"I was struggling in school a lot and I thought it would help," said Markwick, 16, during the North Peace 4-H Achievement Days on July 7.

"I was interested in horses, but I didn't have any knowledge about them."

Markwick got his first experience with horses as a Grade 8 student at Dr. Kearney Middle School, where he signed up for the first year of the Frontier Horsemanship Academy program. There, he learned the basics: how to tie, how to groom, how to ride, and how horses can be good counsellors with their intuitive sense for human emotions.

"I wasn't really on the right path. I started getting into drugs and alcohol and started skipping school a lot," Markwick said.

And achieve he did — with two years of horsemanship academy under his belt, Markwick earned first place in relay racing, along with second and fourth place finishes in a number of other categories at the Achievement Days, ending his first season with the Beatton Community 4-H Club on a positive note.

Markwick accomplished all that on the back of Sweetpea, a sorrel paint filly he saved from slaughter at a meat auction last year for $325.

"Every horse deserves to be given a chance and she just caught my eye," Markwick said.

"She had a look in her eye. She just looked sad, a wild, untouched horse and I wanted to let her see how good the world could be."

Markwick spent last summer and winter learning how to take care of Sweetpea before joining 4-H, where he's building his skills and learning new ones, like communication.

His step-mom, Melissa Nickerson, said the turnaround was helped along when Markwick moved in with her and his father. Raised in a military family, Nickerson said the drugs and alcohol were immediately stripped from Markwick's life, the first in a list of "extreme changes" that included breaking him away from the clutch of technology and bad friends.

At the time, Markwick was an "empty shell of a child that would wear a hoodie over his face."

"You couldn't talk to him," Nickerson said.

But, there was a light in his eyes when he started taking classes at the horsemanship academy, led by Shawna-Marie Phillips, and working with one her horses named Poncho.

"The connection brought this sparkle you would have never seen," Nickerson said.

"When he was with this horse, you would get a sentence out of his mouth. You could talk. When the horse wasn't there, there was nothing."

From there, she took him to the auction, and what followed was a year of hard work and longs days that carried him to his first 4-H season this spring.

"We wanted something that Braiden would have to work really hard for," Nickerson said.

"The horse gives him a voice, it gives him who he is. He went from failing absolutely everything and not going to school, to passing every grade this year, coming out of this 4-H experience with this horse that everybody was complimenting him on. It's just been night and day."

After studying at the Energetic Learning Campus this past school year, Markwick plans to return the horsemanship academy in the fall when he attends North Peace Secondary to start Grade 11.

He plans to go to college one day to become a farrier, and plans to continue on in 4-H too.

"It was a bit stressful especially since it's our first year," said Markwick, who expects those stresses to ease.

"It's a community here and everyone helps out with everything, which makes it easier. It was definitely fun overall. I got to try new things and it was just a fun experience."