What's with all the algae in Charlie Lake, anyway?

Another Peace Region summer is blooming into August, and with it comes everybody's most hated blooms in Charlie Lake: algae.
Jul 26, 2018 4:58 PM By: Alaska Highway News Staff 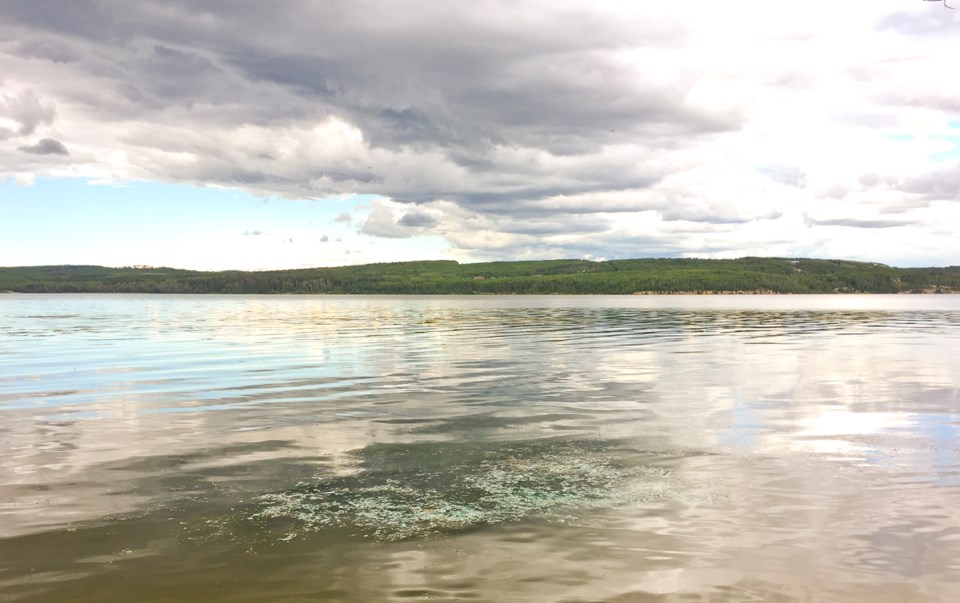 Another Peace Region summer is blooming into August, and with it comes everybody's most hated blooms in Charlie Lake: algae.

Affectionately referred to as Chuck's Swamp by locals, Charlie Lake is a hot topic of conversation for residents, boaters, fishers, even regular old dog walkers. Ask anybody who lives near or visits the lake and they'll have something to say about all the algae.

Late July and early August is primetime for an awful scum of the stuff to coat the surface, turquoise slicks known as blue-green algae that can irritate the skin, upset stomachs, and do serious damage to nervous and respiratory systems in both people and their pets.

So what's all the algae about, anyway?

Here's what you need to know.

Charlie Lake is a productive lake

Charlie Lake is 15 kilometres long, but not very deep — about seven metres, on average.

This lets sunlight dive to the very bottom of the lake in most spots. Roughly 70 per cent of the lake's water volume is in what's called the "photic zone," keeping plant life soaked in sunlight and supercharging photosynthesis, converting light energy into chemical energy and thus fuelling growth.

"The bottom line is Charlie Lake is very productive," says Nick Baccante with the Charlie Lake Conservation Society, which gave a public presentation about the lake in June.

It's important to note the aquatic plants in Charlie Lake are native, not invasive, Baccante says. The society has confirmed this through routine aquatic surveys, and the plants have been there for hundreds of years. The same with the algae. It's nothing new.

"These are plants that have always been there and are part of the natural ecosystem," Baccante says.

As productive as the lake is, it's also pretty stagnant. It takes about six years for the lake to fully flush out through Fish Creek, which eventually drains into the Beatton River.

While the lake has been a water source for the City of Fort St. John in the past, it's also been a dump site for sewage and wastewater, and soaks up nutrient loads of phosphates and nitrates from upstream farm and industrial operations, and from lawn fertilizers from homes around the lake.

All those nutrients sit in the lake for a long time, feeding the plants that thrive on it.

Algae is good and it's always going to be there

Algae are very simple plants that grow in or near water, and don't have ordinary leaves or roots. They are incredibly important to the environment, and most of it is good and necessary. In Charlie Lake, big fish eat smaller fish, which eat zooplankton, which in turn eat algae.

"Algae is part of the food chain and we need them," says Bruce Kosugi, also with the conservation society.

"If people are saying they want to get rid of all the algae in Charlie Lake, you would have a dead lake."

When the ice goes off the lake in spring, there's a bloom — these are diatoms, a type of algae that give the lake a tea-like colour. These also bloom in the fall.

In late spring, early summer, green algae — true algae — starts to bloom, and presents as grass-like clippings on the water's surface that give the lake a green tinge. As summer goes on, these collect and clump together, Kosugi says, but it doesn't generally draw complaints.

Blue-green algae isn't really even algae. It's real name is cyanobacteria, and it's exactly that — bacteria. Cyanobacteria lives in the water and are photosynthetic, and are important to plant life overall. The University of California Museum of Paleotology calls cyanbacteria the "architects of earth's atmosphere" — and the oldest known fossil at some 3.5 billion years old.

Cyanobacteria are single celled, grow together in colonies and are usually green, and are fed in part by the excess phosphate and nitrogen nutrients being dumped in the lake. When the bacteria turns the infamous paint-like turquoise colour, it means the bacteria cells are breaking down and dying — sucking up oxygen as they rot, releasing pigment and, in some cases, pumping toxins into the environment, Kosugi says.

"Where we have problems with blue-green algae is not so much when its green and vibrant, but when it starts dying and stagnates, and produces the bad smelling, turquoise colour patches on the lake," he says.

That's when Northern Health and the Ministry of Environment typically gets complaints and issues public health advisories. But that's changing.

"A few years ago, it caused a lot of alarm," Kosugi says of the health advisories.

"People really avoided the lake because they were paranoid they were going to get sick."

What are public health authorities doing?

Not all blue-green algae blooms produce toxins, but when they do they can cause a range of illnesses from diarrhea and stomach cramps to eye and skin irritation. Other symptoms include headaches, nausea, sore throat, skin rashes or ulcers. Blooms can also produce neurotoxins and hepatoxins that attack the nervous and respiratory systems, as well as the liver.

The ministry and health authority are no longer releasing public health advisories, replacing them instead with general bulletins advising lake users that blue-green algae blooms may be present in Northern B.C. lakes, how to identify them, and how to protect themselves.

"It’s not really feasible for NH to monitor the many recreational water bodies in the North; we know that algae blooms have and do occur in the region," says Northern Health spokeswoman Eryn Collins.

"But given their nature, they can shift and move with weather and wind; the level of toxins can change from day to day. Testing isn’t always a reliable guide to exposure. We rely on the public to inform us of when blooms happen… and when they’re present, it’s safest to assume that blooms contain toxins and to take precautions."

"When you do have those scums, I wouldn’t go wading, but it hasn’t stopped me from going out and canoeing."

Anyone who has come in contact with water where blue-green algae blooms are present should rinse and clean themselves as soon as possible. Anyone with symptoms, including headaches, nausea, sore throat, skin rashes or ulcers, should see their doctor.

What can be done control nutrient overload?

As good as nutrients can be, too much for the lake can be a bad thing too.

The conservation society has been actively encouraging lakeshore residents to reduce the amount of manmade nutrients being churned out into the water by cutting back fertilizer use and reducing runoff.

Perhaps most importantly, keeping natural vegetation along the shoreline is key. These riparian zones play a critical role in buffering and filtering out excess nutrients and other compounds from reaching the water. Destroying them is bad and impacts the overall health of the lake.

On July 28 and 29, it will hold a workshop about the aquatic plants in the lake. At the workshop, Rick Nordin with the BC Lake Stewardship Society will provide a hands-on field training in plant sampling, identification, and surveying. There will also be a discussion about lake management.

Whether you live at the lake, or live in town nearby, remember, you have a stake in its future. The conservation society conducts ongoing research about the lake, and even takes part in an ongoing bat conservation project.

Learn more about getting involved by emailing the society at clcs.bc.info@gmail.com.