Sunny, colder once again. Maybe -7 or -8C, and will be another windy one.

We're in place by 10 a.m. Big guy is bedded at 315 yards, same elevation as us, wind in our face. Once again freezing, but today only a two-hour wait before he begins to stir.

I load the gun, get into place, lay on top of ridge, fully exposed to the bitter wind, gun resting on a sloping rock. 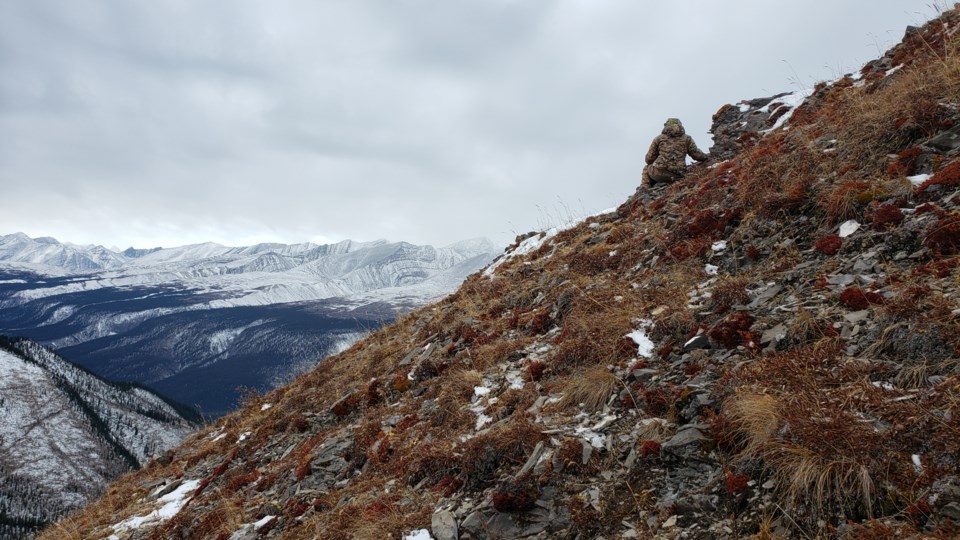 I’m ready. It's a 7.5-inch drop at 300, so I will hold just below his back, behind the front shoulder. Another half hour goes by, getting stiff in the cold. Up he gets, stretches, takes a couple steps, broadside, by himself, and finally, with that I pull the trigger.

“Scope whacked me. I can’t see” I reply.

But it's too late, over the hill he goes. 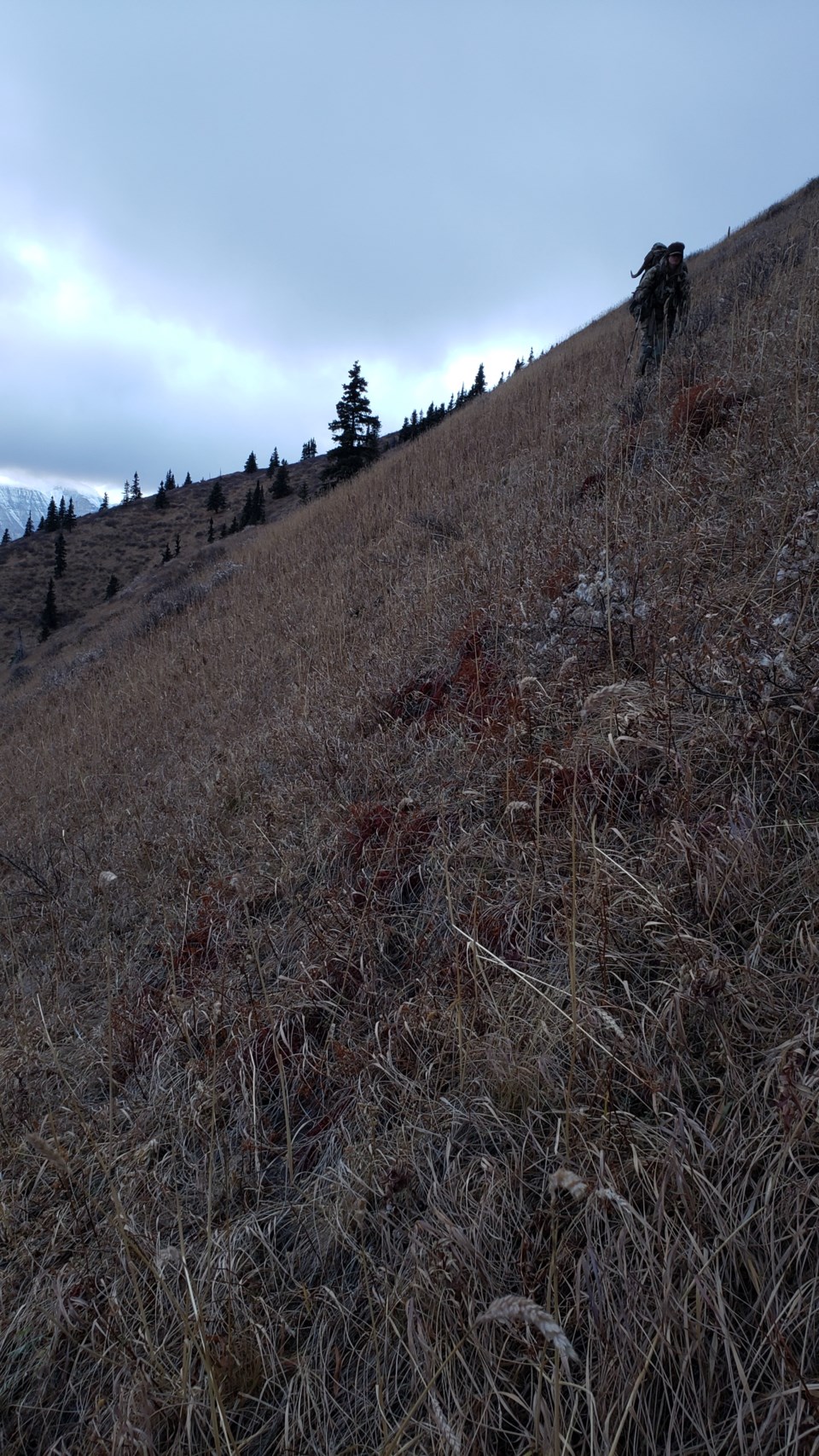 Day 14 packing out. By Evan Saugstad

I get my bearing. I'm not bleeding, but that scope sure whacked me. I didn’t have a good enough hold on the gun and that sloping rock kicked the gun sideways and it got me in the left eye, even though I shoot right. Helluva lump, but my vison clears and I am OK, so off we go in pursuit.

Disappointment starts to set in. Years of hunting elk and deer in the thick bush have got me used to seeing them fall when I shoot.

I didn’t get him in one shot, but maybe he is just on the other side, as I hit him good, and it looked like it was in the correct spot. Takes 15 to 20 minutes to cross the small canyon and get to the other ridge.

He's not there, so we begin to head in the same direction they went, across the grass covered sidehill and directly away from us. Finally, after 300 or 400 yards, there he is, laying down, by himself. 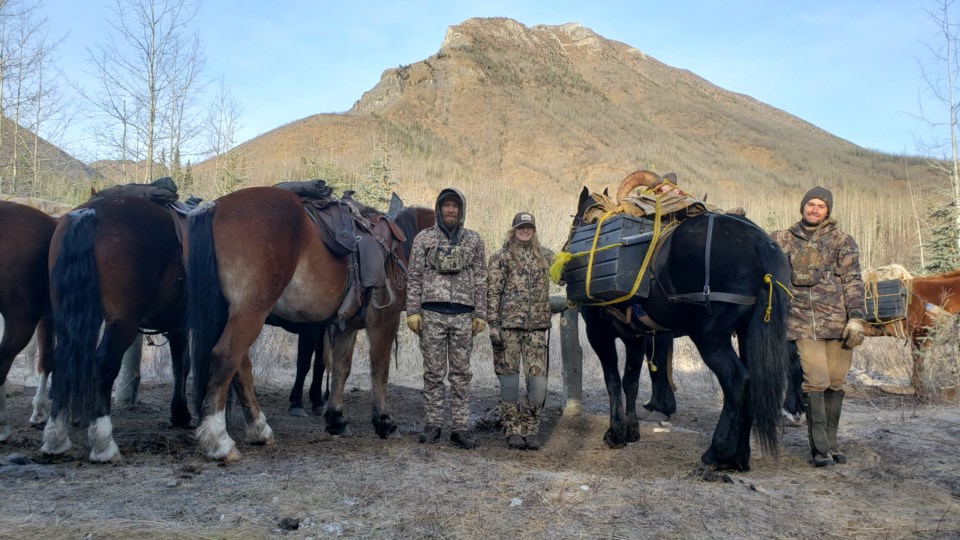 To make a long story short, up he gets, another shot, off he goes. Catch up to him in another canyon, another shot, and it's over. I slowly climb down into the canyon to where he lays, and the emotions kick in.

Over 50 years in the making. The hard part of hunting is when the animal dies. Didn’t get it done in one shot.

Kielee is watching me. It's hard to know what to say. In the moment, I don’t know whether to be happy, sad or remorseful.

Just doesn’t feel like the time to celebrate. That will come later. 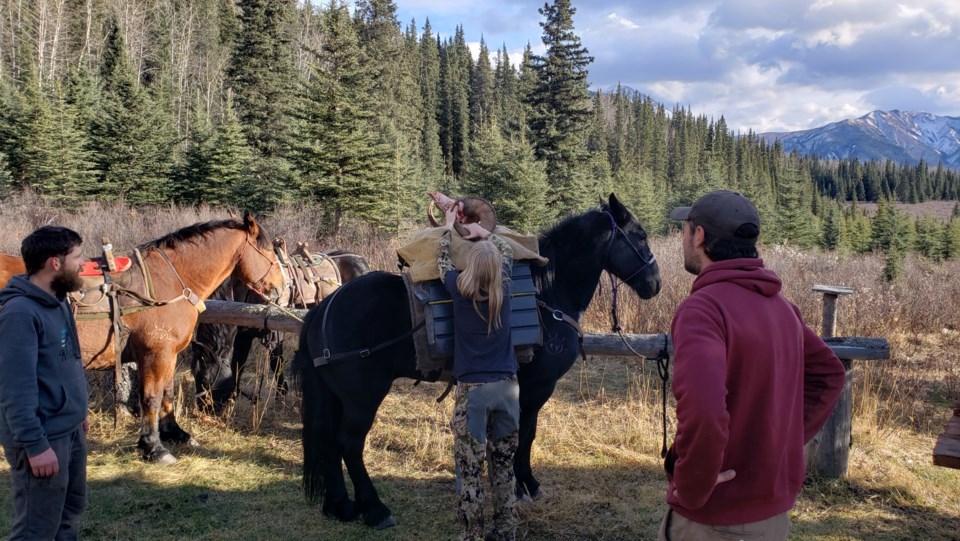 Day 15 packing up. By Evan Saugstad

“Felt the same thing when I got my ram in August,” Kielee says.

“He’s a beautiful ram, just what I wanted,” I finally get out. “Don’t think I am not appreciative, I am. Just hard to know how to express myself right now.”

And with that, pictures, skinning, boning, everything into the packs by 5:30 p.m. and we head for the horses. Kielee and Jesse got the meat, horns, and cape. I get everything else that won’t fit into their packs. 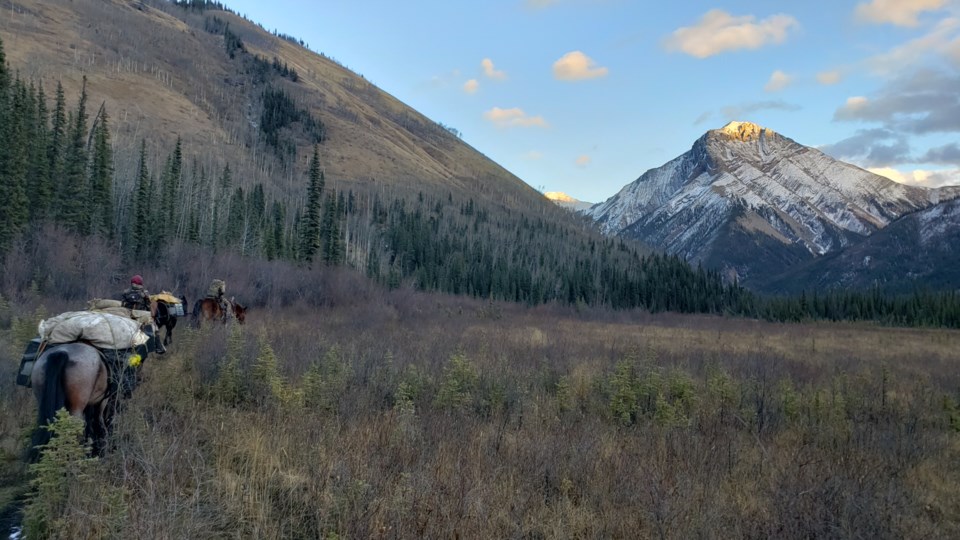 I go ahead to scout a route to ensure we can cross those canyons without going uphill, they follow. Not too far to go, maybe a kilometre, mostly sidehill, across a couple canyons and then down to the horses.

We get back to camp just after dark. And finally, I get to open that mickey of whiskey I had stashed in my pack since Day One. A short drink for everyone, but not enough to finish the bottle.

Everyone is tired. Fourteen days so far. Nine trips up and down those mountains. Day after day spent laying in the wind, trying to stay warm. Jesse and Scotty up early every day wandering the bush looking for horses.

All have taken their toll, and everyone is tired. But it's not quite over yet. We got tomorrow to finish the cape, pack camp, and begin the ride home. A big snowstorm is forecast and if we aren’t at base camp by the afternoon of the 15th, I may be stuck there for a while until things clear up. 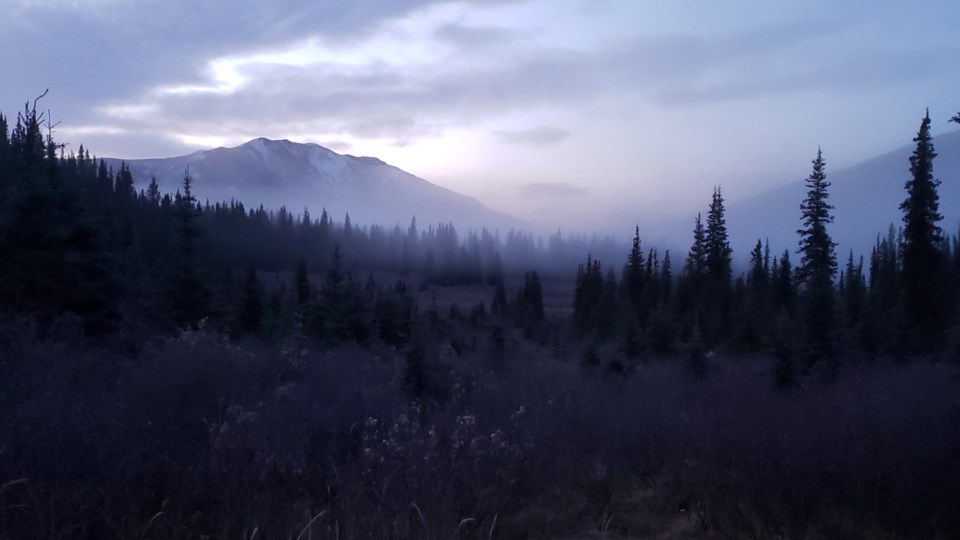 Day 15 is another sunny but cool day, but no mountains to climb.

Kielee capes the sheep, the rest of us pack up camp, and put everything away for the season as no one will be back here until next summer. We decide we have time to ride back to camp one, stay there for the night and then have a shorter day to base.

The horses sense this is it, the season is over, and once packed and headed in their homeward direction there's no holding them back, no dilly dallying today. Even Joan the Roan didn’t fuss as he got his pack. Make good time to camp, and guess what?

That damn bear has been back but couldn’t get through the barbed wire so gave up. Just left some claw marks in the plastic. Supper and bed, cape and horns safely tucked inside the cabin. 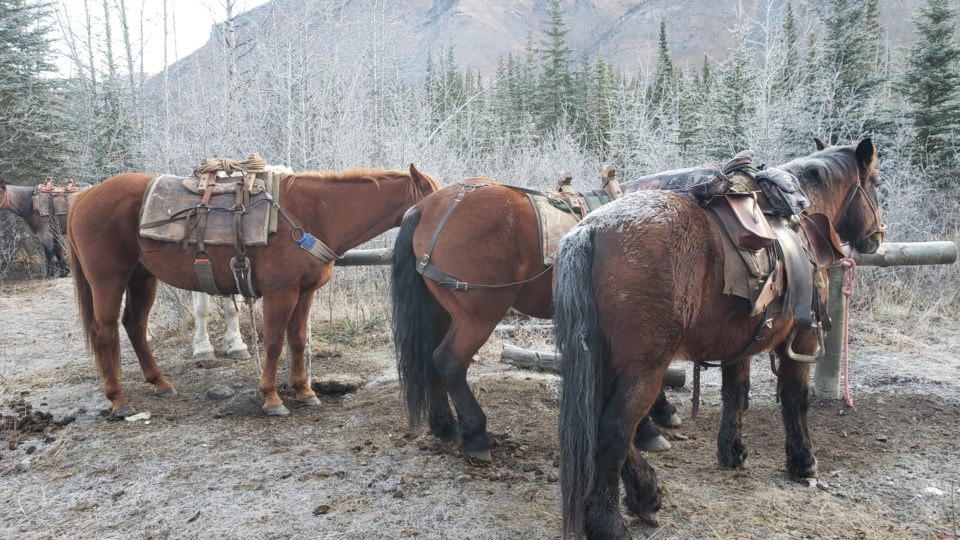 Day 16 is the coldest morning yet. Frost on some of the horses. Maybe -15 C. Creeks and rivers running ice. Sunny, and not too windy down in the bottom lands. Put on all my clothing once again, have a quick breakfast, repack the horses, and I'm homeward bound.

There's no slowing them down today, not a laggard in the bunch. Cold ride to begin with, but slowly warms with the sun.

Plodding alongside a creek, narrow, twisting trail, thick river bottom willows on both sides. I'm still looking at the sidehills trying to see if any more rams. Suddenly, the solitude is broken with, “Hey! Bear!” As loud a yell as I have heard. 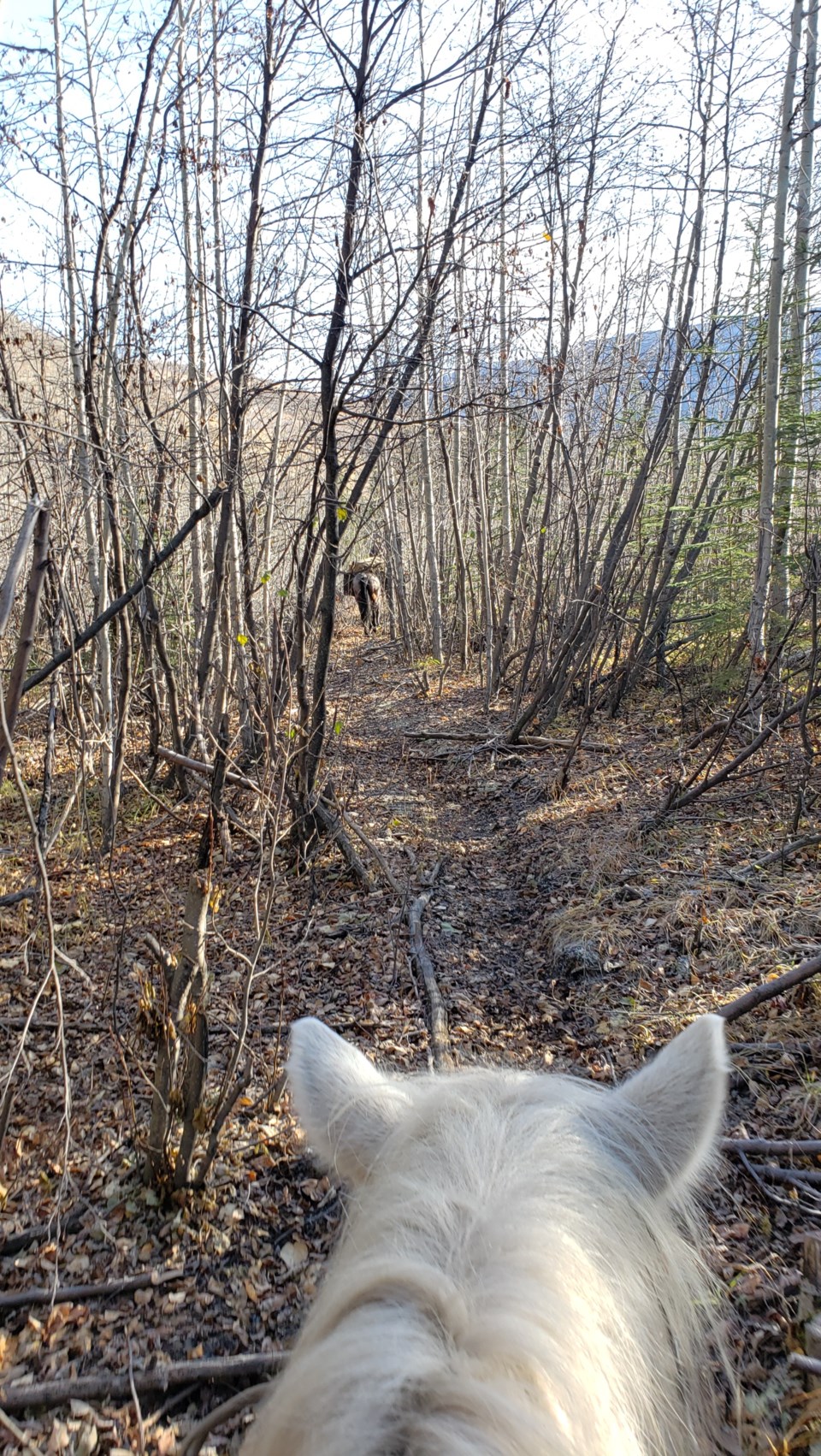 “Hey bear! Get out of here!" Kielee yells. "Jesse, bring your gun, a big grizzly, right here on the trail.”

Everyone stops. Jesse scrambles to join her with his gun. Scotty and I stay a hold of the horses, but the horses don’t seem to be too worried.

Everything goes quiet. “He is gone,” says Kielee. “He wandered over toward the river.”

The grizzly was 10 yards in front of her and her horse in the middle of the trail, coming toward us when they saw each other. Bear and horse didn’t seem to get too excited; both looked at each other and the bear thought best it should get off the trail and let us pass. Good thing, we didn’t need a rodeo or having to deal with a shoot out. 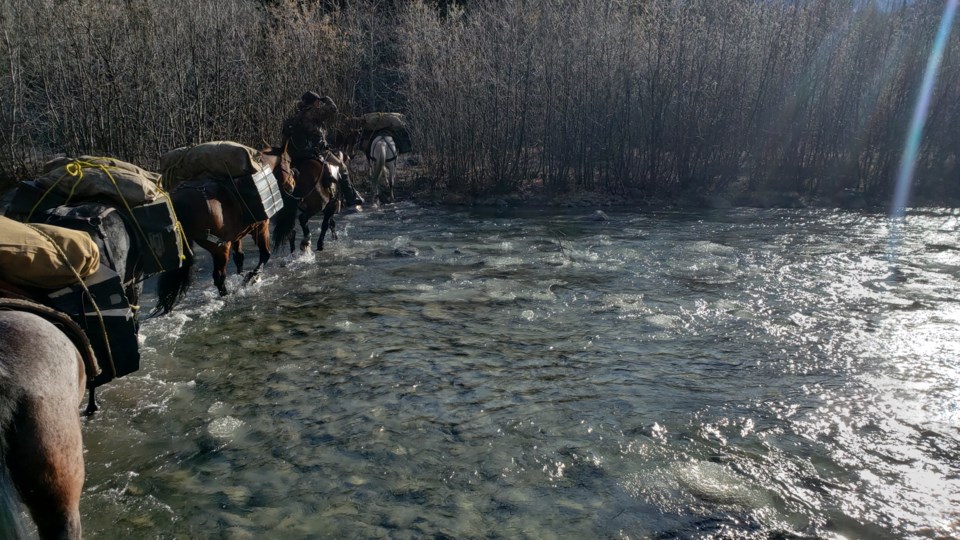 Everything quickly calms down, and the rest of the horses don’t even venture a snort as we pass by where the bear was. Big tracks in the sand.

Horse don’t even slow for river crossing running slush ice. Don’t stop as they stomp out the shore ice. Don’t want to stop until they are home and back on their own turf.

We get to base camp at 2:30, say our quick goodbyes, sort out the gear, and get back into the plane with the hour for the short flight out. I'm soon in my truck heading home. 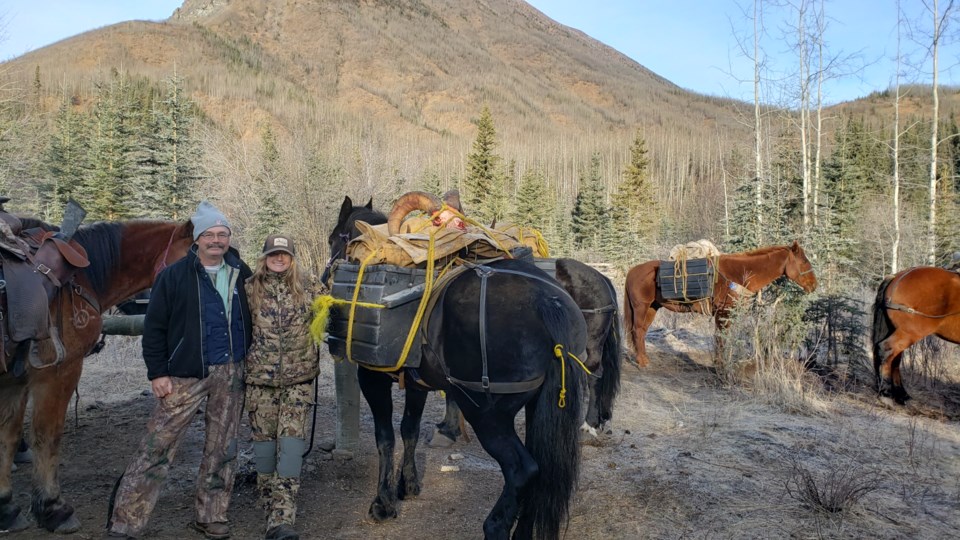 Driving home, I think of the 16 days of adventure that just went by, memories I will never forget, one of the best vacations I have ever had. Thinking there's nothing left on my bucket list. Thinking if my life’s story still works out, I must do something like this again.

I'm home at dark, shower, put fresh clothes, and I feel great. I dropped 12 pounds. It's time for a whiskey and then hear Karen, “Whiskey will give you back your whiskey belly."

As a write this, my ram is still at the taxidermist waiting to be finished. The government inspection said he was 8.5 years old, Kielee thought he was 9.5.

Doesn’t matter which for me. He is mine, and just what I wanted.