When it’s burned to generate power, natural gas has about half the carbon intensity as coal, which is why the B.C. government has promoted a liquefied natural gas industry as an important bridge fuel for addressing climate change.
Dec 17, 2015 9:41 AM By: Nelson Bennett 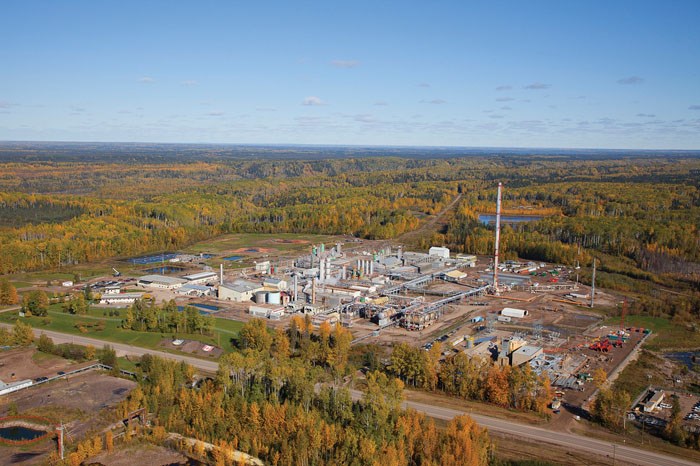 When it’s burned to generate power, natural gas has about half the carbon intensity as coal, which is why the B.C. government has promoted a liquefied natural gas industry as an important bridge fuel for addressing climate change.

But when it’s extracted and processed, natural gas produces significant amounts of carbon dioxide (CO2) and methane, both of which are greenhouse gases.

And that could pose a serious problem for B.C.’s nascent LNG industry under new greenhouse-gas reduction requirements that the federal government plans to impose.

About one-quarter of the CO2 emissions would come from upstream extraction and processing. Most of the CO2 produced in the gas fields could easily be sequestered—typically stored underground—according to organizations like the Pembina Institute and CMC Research Institutes.

“It’s an easy get, and it’s one where B.C. could actually be one of the world leaders,” said Richard Adamson, president of the CMC Research Institutes.

Last year, Saskatchewan became the first jurisdiction in the world to commission a large-scale carbon capture and sequestration (CCS) project for a coal-fired power plant – an $850 million project that removes one million tonnes of CO2 per year from the Boundary Dam Power Station.

Last month, Alberta officially commissioned the first CCS project for the oilsands: a $1.35 billion CCS plant that will capture one million tonnes of CO2 annually from Shell Canada’s Scotford heavy oil upgrader in Fort Saskatchewan and sequester it underground.

And now the pressure is on B.C. to make it a triumvirate of western Canadian provinces leading the way on carbon capture and storage by implementing it in B.C.’s natural gas industry.

B.C. already has a project on the books and a willing industrial partner. Spectra Energy (NYSE:SE) has had plans on the drawing board since 2009 for a $500 million CCS plant for its Fort Nelson gas processing plant, which is B.C.’s largest emitter.

For half of what it cost to build either of the Alberta and Saskatchewan CCS projects, Spectra Energy’s Fort Nelson project could store twice as much CO2 – 2.2 million tonnes per year.

CCS for coal power plants and oil processing is costly because it requires adding a step to the industrial process to strip out CO2.

That extra step is already there in a natural gas processing plant. Before it can go into a pipeline, natural gas coming out of the ground must have the CO2 and hydrogen sulphide removed to produce a clean stream of methane.

So there is already a pure stream of CO2 being produced at more than 100 gas processing plants in B.C. But in B.C., most of that CO2 is simply vented into the atmosphere.

All that a natural gas processing plant needs for carbon sequestering is to add compression and pipeline infrastructure to transport the CO2 and inject it deep underground into a saline aquifer or depleted gas reservoir, where it can be stored indefinitely.

Spectra already carries out CCS with six of its smaller, newer plants.

But the Fort Nelson plant, which was built in the 1970s, doesn’t have CCS, and it’s the biggest CO2 emitter in B.C.

It’s also a result of the Horn River gas processed by the plant having a much higher carbon content than the gas coming out of the Montney.

About 12 per cent of Horn River gas’ composition is carbon, compared to just 1 per cent in Montney gas.

Spectra has been sequestering 100,000 tonnes of CO2 per year in deep saline aquifers at its six other small gas processing plants.

But the older Fort Nelson gas plant produces 2.2 million tonnes of CO2 per year that isn’t being sequestered.

The company’s plan for a $500 million CCS project at that plant is on the back burner, for a number of reasons.

“The big challenge is the economics, and right now there isn’t a business case for it,” said Matt Horne, the Pembina Institute’s associate regional director for B.C.

“They have to separate the CO2 already. Right now there’s no incentive to do anything other than vent it to the atmosphere, which is what they do.”

In Alberta and Saskatchewan, the two big CCS projects were made possible with massive provincial and federal government subsidies.

One way to make capture and storage viable in B.C. would be to put a price on the venting of carbon. B.C.’s carbon tax only applies to combustion; it doesn’t apply to the CO2 produced by upstream activities such as venting.

Non-combustion CO2 was excluded from the carbon tax when it was first introduced in 2008.

Horne said the province didn’t have good data on the CO2 produced in the extraction and processing of natural gas when it introduced its carbon tax.

Now that the B.C. government is updating its climate plan, Pembina and CMC Research Institutes want the carbon tax extended to non-combustion carbon sources and increased from its current price of $30 per tonne.

Gary Weilinger, vice-president of external affairs for Spectra Energy, agrees that applying the carbon tax to upstream CO2 would be an incentive for natural gas companies to finance CCS, although he said it would likely have to be higher than $30 per tonne. But unless other gas producers in the U.S. and Alberta are also paying an equal carbon price, it would put gas producers in B.C. at a disadvantage.So what about finding a customer for the CO2 in the form of carbon credits to help finance CCS?

“Currently there is no market for that,” Weilinger said. “There’s no ability to offset against anything and the only buyer in British Columbia is the government of British Columbia. Frankly, they’ve got all the offsets they need to meet their target.”

He referred to B.C.’s carbon-neutral policies, under which schools, hospitals and other public institutions that can’t hit carbon-neutrality targets must pay a penalty to the government in the form of carbon offsets, which are used to buy credits to help finance carbon-reduction initiatives, like preserving forests.

The Fort Nelson plant processes gas from the Horn River basin, and developers have been voting with their feet there – avoiding the Horn River and plowing all new investment in the Montney.

The Montney is richer because it has liquids such as gas condensate. Horn River gas is dry. So not only does it have a higher carbon content than Montney gas, but it’s also less valuable.

Should a liquefied natural gas industry develop in B.C., it could provide the additional demand that will make the Horn River worth investing in again.

But until then, Spectra Energy said it would be hard to justify a $500 million investment in a plant that may have poor long-term prospects.

“We’re the only ones who are processing any gas right now coming out of the Horn River basin,” Weilinger said.

“So the one thing that we would need is security of natural gas supply. Will, in fact, that area be developed in the future that would justify a large-scale capital investment?”

In October, the B.C. government amended the Petroleum and Natural Gas Act to allow for carbon capture and storage.

Whether it plans to require it or encourage it through its new climate plan remains to be seen.

A framework plan will be released this month for review.

The Ministry of Environment has not said whether it will include extending the carbon tax to upstream activities for the natural gas sector.