Northern B.C. resident was amongst those arrested for protesting in Burnaby last week
Dec 4, 2014 8:43 AM By: David Dyck 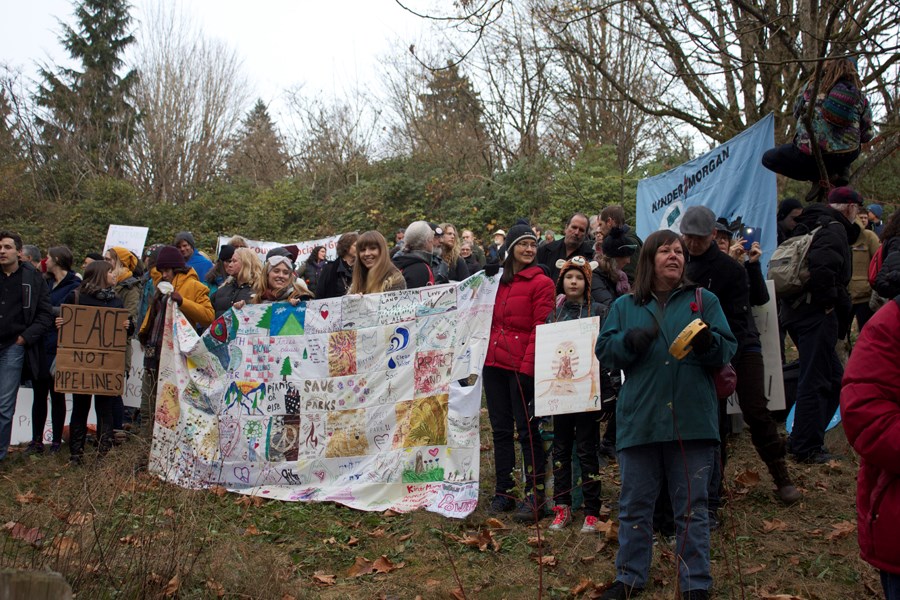 Former Fort Nelson resident Elizabeth Biggar was among those arrested for protesting in Burnaby last week.Submitted

Among the protesters who stood on Burnaby Mountain until last week opposing Kinder Morgan’s exploratory drilling was Elizabeth Biggar, who until recently was a long-time resident of Northern Rockies Regional Municipality.

Biggar was one of the 100 protesters who were arrested, the first time for a few hours, the second time for three days.

The protests on the mountain have died down since Nov. 27, when the Texas-based company dropped all civil contempt charges on the arrested protesters, and a judge denied their application to extend an injunction on a site where the company was working. The work was being done in preparation for a proposed expansion on their Trans Mountain pipeline.

How does a Fort Nelson resident get drawn into a protest on the Lower Mainland? Biggar had been living down there for seven months after leaving her job as environmental advisor in Fort Nelson. She had lived there for eleven years, and still calls it home. She still owns a house there.

“Fort Nelson was the first place I’ve actually felt was my home in my whole life,” she said. “I love the community, I love the people there.”

Biggar described herself as being “very socially conscious.”

During her time in Fort Nelson, she said she helped bring initiatives like a recycling program and clothing exchange to the community, and was excited about the changes she saw.

When that chapter in her life came to a close, Biggar moved to the Lower Mainland.

She hadn’t planned to protest the drilling.

Initially Biggar described it as casual interest. That changed in mid-November when the court injunction came down in favour of Trans Mountain proceeding with the work unhindered.

She started protesting in earnest.

Her first arrest occurred early on, before the protests became national news. Biggar found herself in the midst of a group of protestors being forced back by a line of police officers. Biggar said she didn’t believe they were in the injunction zone, but the police kept pushing.

“I like to think I’m a strong individual; I couldn’t handle that, that movement,” she said. The scene she described was chaotic.

“One RCMP officer was pushing into my neck and a female officer — right before I was arrested — kind of tapped him out and said, ‘I got this,’ and he went out, because he was being so rough. There was a man beside me that started yelling, ‘Don’t touch her [Biggar] on the neck like that!’ And I’d say stuff like, ‘I understand you have to push me back but that’s not ok, you don’t need to push my neck.’ They tapped him out.”

The female officer who took his place asked her why she was crying, and she responded that she thought that what the police were doing was wrong. Seconds later she was pulled out of the line and arrested.

She was held in a police van for a few hours before being released. “I didn’t plan on being arrested again, it was not a fun experience,” she said. But when she went back to bring supplies up to those who were still there, watching others cross the line and get arrested, she couldn’t help herself. “I walked over and I said, ‘This is not ok what you guys are doing and you can’t keep doing this,’ and then I was arrested again.”

This time she said she was held for three difficult days. When she got out, she said she got a negative reaction from some in her home community.

“I have had so much hate mail on my Facebook from people who I thought were my friends, saying ‘you’re disgusting’ for protesting,” she said. While she dismissed some of the reaction as “dumb rhetorical arguments,” others made a lot of sense, she noted. “’We don’t know if we’ll have a job next week to pay for our mortgages.’ I totally get that, and I’m learning so much. I don’t have the proper answer, but I know that continuing down the path we’re going on is not the answer,” she said.