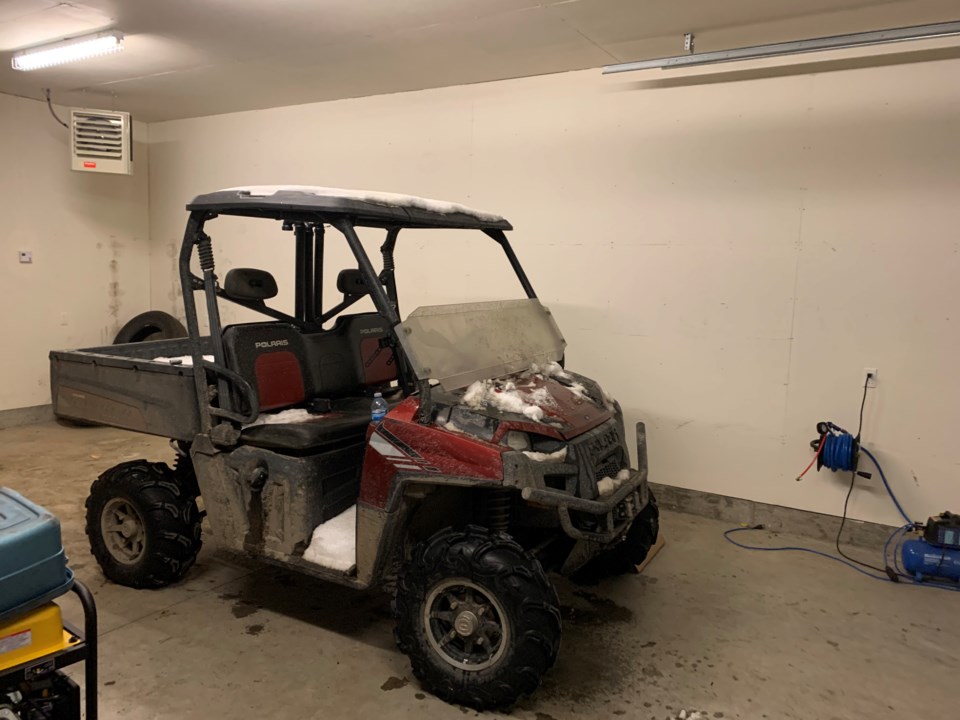 On Nov. 10, 2020, the Hudson’s Hope RCMP received a call of an abandoned side by side that showed up at a work site a few days earlier. The detachment is still seeking to reunite the side by side with its rightful owner.Hudson's Hope RCMP

Hudson’s Hope RCMP responded to 24 calls for service between October 18th and November 16th.  61 written violations and warning tickets were issued to drivers between the above dates with 44 of those violations being speeding in the school zone along Beattie Dr. Highway and road safety continues to be a big focus for the Hudson’s Hope RCMP with the school zone along Beattie Drive and the construction zones along Hwy 29 being the largest focuses for traffic enforcement at this time.

Police have been monitoring the multiple construction zones along Hwy 29 between Hudson’s Hope and the Half Way Bridge and have issued a multitude of speeding tickets to drivers over the past few weeks. We are asking drivers to take heed to the white regulatory speed signs and drive accordingly so that the construction workers and flaggers can conduct their work safely.

On October 20th, the Hudson’s Hope RCMP received a report of a theft from motor vehicle from within the parking lot of a local hotel. It was reported that early in the morning the owner of the vehicle observed a dark coloured mini-van parked behind his truck and saw an unknown person standing beside the open door of his truck. By the time the owner exited and reached the parking lot, the van had sped away. Several pieces of survey equipment and other personal items were noted to be stolen. This continues to be an open file at this time.

On October 20th, the Hudson’s Hope RCMP received a report of a cow that had fallen through the ice atop a slough and was unable to get out. Upon police attending, they found a young calf still treading water and surrounded by ice, unable to get out on his own.  Police used what means were available to break the ice up, creating a path, and with the help of locals and some persons who stopped to help, a lasso was placed around the calf and he was heaved out. Though wet and exhausted, “Dugout Danny” eventually got to his feet and was later observed being scolded by his mother.

On October 24th, the Hudson’s Hope RCMP received a report of a vehicle collision along Hwy 29 with one of the vehicles fleeing the scene prior to police attending. Upon police locating and stopping this vehicle, the driver was found to be intoxicated and was subsequently charged with operating a conveyance while impaired with the truck and trailer being towed.

On October 27th, the Hudson’s Hope RCMP received a report of a fraud in which a local resident was the victim of. A call was received from an unknown person who was claiming to be the daughter of the call-taker and that she had been involved in a motor vehicle accident in which a child was injured and that she was being charged and needed bail money. A short time later, another unknown person called and advised the call-taker that he was a lawyer and that he required money for bail for her daughter but that she could not speak to anyone about this. Unfortunately, before the call-taker caught onto the fact that this was a fraudulent call, monies had been forwarded. Police are still investigating this file but would like to advise the public that if they receive any calls that sound suspicious in nature, to contact their financial institutes and or the RCMP prior to forwarding any money.

On November 10th, the Hudson’s Hope RCMP received a report of an abandoned Polaris Ranger side x side ATV that was found near a work site along Canyon Dr. This ATV had been sitting in place for several days with no one around, therefore police seized it and are currently looking to track down the owner.

Anyone with information regarding current or past investigations can contact the Hudson’s Hope RCMP directly at 250-783-5241 or anonymously through Crime Stoppers at 1-800-222-8477. Visit http://crimestoppersnebc.cafor advice on submitting tips online and to browse the areas “Most Wanted” page.

This information was provide by Hudson's Hope RCMP. Email your crime news tips to reporter Tom Summer at tsummer@ahnfsj.ca