Little is known about a landslide in Hudson’s Hope that's releasing toxic metals into a creek, but residents fear it's a bad sign for the Site C reservoir.
Oct 29, 2015 10:13 AM By: Bronwyn Scott 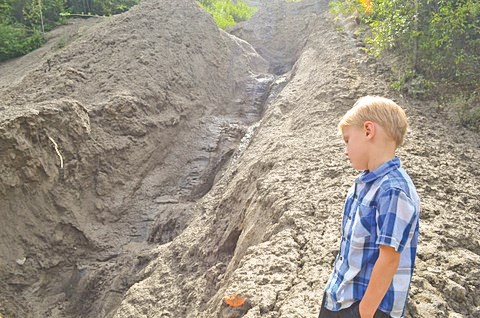 River Summer, 5, looks at the sludge left by a landslide on Brenot Creek in Hudson's Hope. Summer can no longer play in the creek after the landslide leaked toxic metals into the water.Darcy Summer

Little is known about a landslide in Hudson’s Hope that's releasing toxic metals into a creek, but residents fear it's a bad sign for the Site C reservoir.

Tests have confirmed that the landslide, which began in spring 2014 on Brenot Creek and continues to fall away, has been oozing a grey sludge containing high levels of heavy metals like arsenic, cadmium, barium and lithium into the water.

Locals have been concerned about the landslide since it began, but the Oil and Gas Commission says the phenomenon is naturally occurring.

At first, resident Leigh Summer thought hydraulic fracturing nearby was to blame. Now, he’s not so sure.

“I’m not convinced that it is fracking. I was pretty convinced initially, but the flow seems to increase with the level of Williston (Reservoir) increasing, so I have a feeling it’s a conjunction of the two,” he said in an interview with the Alaska Highway News.

“There’s something going on with the aquifers underneath... I suspect, in my mind, that there’s some connection between one or the other, or both.”

Summer has observed the curious landslide since it began. He and his family live below it, and are saddened by how much Brenot Creek has been transformed.

His wife was raised on the property, and she and her brother used to fish in the creek.

“Now it’s so muddy that when you put your hand in it, if you have an inch of water over top of your hand, you can’t see your hand,” Summer said. “There used to be fish in the creek, but it’s basically dead today.”

The District of Hudson’s Hope is trying to find out where the heavy metals are coming from, and if they are natural, and what the implications are.

“If it’s natural, and they’re talking about putting a reservoir on this river, any time there’s a slide it unearths the same type of formation. Aren’t we opening ourselves up to the possibility of opening up other spring-fed aquifers and getting more contamination from these heavy metals?” Summer said.

“The silts and the clay banks of this whole Peace River valley between here and where they’re going to put Site C is very similar... we are really subjecting ourselves to the risk of having a contaminated reservoir which, obviously, contaminates the river all the way to the Slave (River) and to the Mackenzie (River) and the Arctic Ocean, so it’s pretty significant.”

Hudson’s Hope Mayor Gwen Johansson is of a similar mind.

“Our issue, I think, is that we need to find out where the heavy metals are originating,” she said.

“The OGC report from last year indicated that... it’s naturally occurring in the soils, and it may be.”

If it is, Johansson’s priority is to determine if it’s an isolated deposit, of it it’s common to all the soils of the Peace River valley.

“We know there’s going to be many more slides should this reservoir be built, and so what are the implications of that? I don’t know that anybody knows that,” Johansson said.

The apparent change in ground water movement in and around the slide area has to be studied too, she said.

A number of specialists have visited the site, but there are still no clear answers.

“I’ve been in contact with a number of scientists at different universities, and some of them have some ideas, but nobody has a comprehensive approach to how (to solve it),” said Johansson.

The Ministry of Environment has committed to sending a team of specialists to examine the site next year.