The B.C. government has appointed a new special advisor to provide “fresh eyes” on Site C after BC Hydro expressed serious concerns with the dam project’s schedule, budget, and geotechnical challenges on Friday.
Jul 31, 2020 12:25 PM By: Alaska Highway News Staff 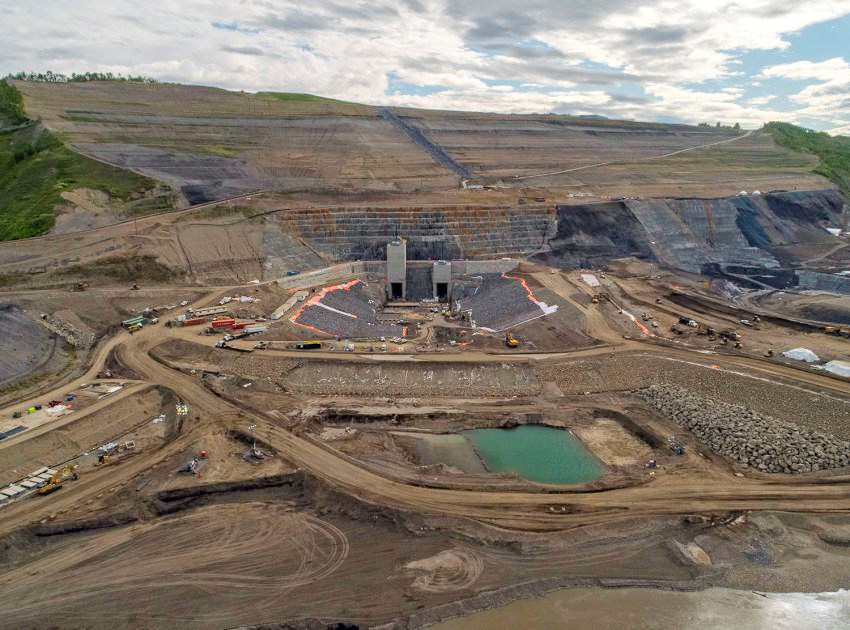 North bank view of the completed diversion tunnel inlets, with channel, cofferdam, portals, and gate structures, May 2020.BC Hydro

The B.C. government has appointed a new special advisor to provide “fresh eyes” on Site C after BC Hydro expressed serious concerns with the dam project’s schedule, budget, and geotechnical challenges on Friday.

At a press briefing July 31, Energy Minister Bruce Ralston said the province has appointed former deputy finance minister Peter Milburn as the advisor, who is now tasked with reporting his findings on the project in the fall.

The announcement comes after BC Hydro filed its latest Site C progress report with the B.C. Utilities Commission, which noted the company is no longer confident it can hit the original late-2023 date for the dam's first generating unit to go into service - or the 2024 planned date for the whole project's final in-service date.

“Towards the end of December 2019, investigations and analysis of geological mapping and monitoring activities completed during construction identified that some foundation enhancements would be required to increase the stability below the powerhouse, spillway and future dam core areas,” O’Riley wrote in his filing with the BCUC.

"By the end of the March 31 reporting period, we had learned more about these geological challenges. Based on further engineering analysis of the proposed mitigation measures, the foundation enhancement costs are anticipated to be more substantial than initially expected in January."

BC Hydro said the company is now going back to "re-baseline" the project to get an idea of how much it would take to bring Site C online.

The last cost estimate was $10.7 billion, but some observers have noted it could incur a significant overrun and cost a total of up to $12 billion.

Despite that, Ralston said abandoning the project - a key piece of the energy infrastructure plan to energize industrial development in northeast B.C., including facilitating the operation of LNG Canada's planned project for liquefied natural gas - is not an option.

On that topic, Ralston laid the blame directly on the previous Liberals government, who, Ralston said, explicitly pushed Site C "past the point of no return."

"When we [the NDP] came into government in 2017, we had a very serious discussion about the project and made the decision to go forward," Ralston said. "So I'm not sure [dropping Site C] is a realistic alternative. I will await the advice of Mr. Milburn on that."

MLA Greg Kyllo, the opposition BC Liberal critic for BC Hydro, said the NDP must take responsibility for cost increases under its watch. Kyllo noted previous energy minister Michelle Mungall said in 2017 the project was on time and budget before the NDP subjected it to a “highly politicized” review.

“Today’s announcement by the NDP speaks to a government that is incapable of taking responsibility for any of its own mistakes,” Kyllo said.

"John Horgan and the NDP were handed a project that was on track to meet all of its targets and it is they who have allowed this project to fall behind. Now the people of this province are stuck paying for yet another review because the NDP simply have no idea how to manage the most important clean energy project in B.C.”

Site C has been among the most hotly debated infrastructure projects in B.C. in recent years due to its scale, cost, potential economic benefits and negative environment impact.

Ralston said the current government had addressed a number of "cost pressures" in the project going forward prior to March, but the COVID-19 pandemic has compounded the problem as BC Hydro scaled down work on powerhouse and spillway construction to follow provincial health guidelines.

Ralston did note that BC Hydro remains on-track to achieve river diversion this fall, already delayed by one year from 2019 at an extra cost of $610 million, and a major milestone in determining the project's eventual in-service date.

The Peace River needs to be diverted between Sept. 1 and Oct. 1 in any given year when water levels are lowest to allow crews to start building the kilometre-long, 60-metre high earthfill dam.

Ralston said he is "very concerned" about BC Hydro's latest report on cost and scheduling, and that is the main reason he has appointed Milburn to his new post.

"We will see where that takes us," Ralston said.

The minister did note that other projects such as LNG Canada has not reported being endangered by the lack of certainty at Site C (despite also scaling back work on their sites), adding that - at last check - the LNG project is still on-track to capitalize on the province's CleanBC plan to provide low-emissions energy to the public.

"I think we can all appreciate that COVID-19 has created challenges that none of us could have foreseen a few months ago," he said. "These reports provide a first glimpse of how COVID-19 has caused uncertainty with the project's schedule, as well as adding cost pressures to its budget."

There were 1,443 workers reported at the camp outside Fort St. John on July 31.

Meanwhile, a Site C worker who tested positive for COVID-19 has been cleared to leave self-isolation and has returned home.

— with files from Chuck Chiang in Vancouver