BC Green Party Leader Andrew Weaver says work on the Site C dam isn’t yet passed the point of no return following a visit to the area last week.
Aug 31, 2016 10:56 AM By: Matt Preprost 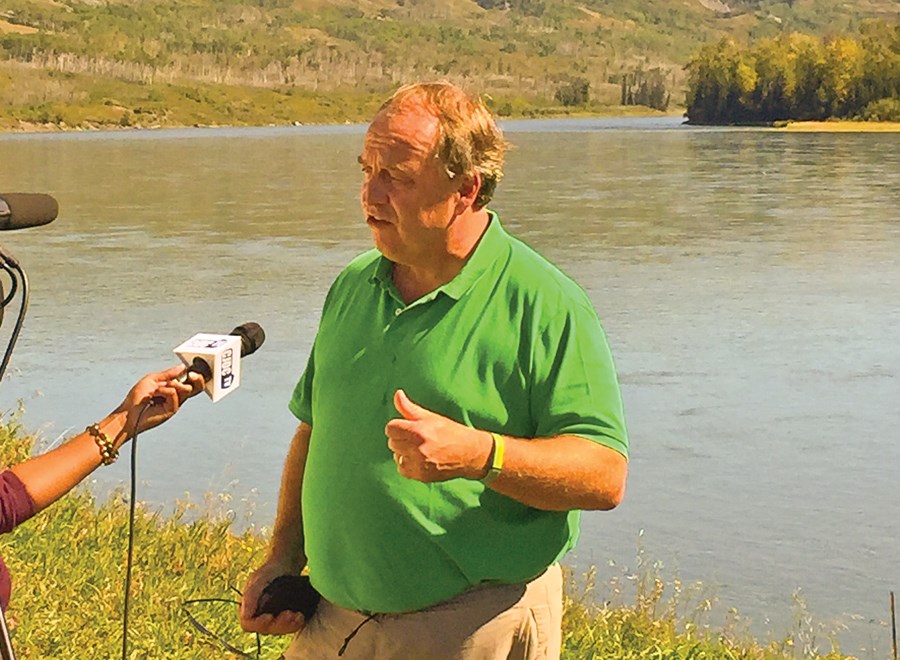 BC Green party leader Andrew Weaver speaks with media on a recent trip to the region. - Supplied Photo

BC Green Party Leader Andrew Weaver says work on the Site C dam isn’t yet passed the point of no return following a visit to the area last week.

Weaver, the lone Green Party MLA in the legislature, met with opponents of the dam and took a river-level tour of the work and Rocky Mountain Fort sites Aug. 25. Weaver was last in the area in fall 2013, before public hearings on the project got underway.

“I wanted to see how much has been done,” Weaver said. “Nothing has passed a point of no return.”

Weaver believes the province is taking a “fiscally reckless approach” in marching ahead with the $8.8-billion project without a proven need at the expense of rich, Class 1 farmland, and staring at the prospects of having to sell the power the dam generates at a loss on the export market.

“For people who haven’t seen it, (the Peace River has) got to be one of the most beautiful parts of North America. It rivals the Grand Canyon in terms of spectacular beauty, but rather than desert, it’s vibrant forest,” he said.

“It’s hard to describe the  beauty. It’s like you go back in time when you go on the Peace, like you’re living the life of the early fur traders … then you come across this patch where they’ve clear cut.

“More people from B.C. need to come up and see what’s happening and ask hard questions about why it’s going on.”

Though there were 651 Peace Region residents working on the dam in June, Weaver believes the region won’t be well served in the long term.

“We’ve got to get away from relying on boom and bust jobs. These are people working, then there’s going to be a big collapse afterwards,” he said.

“What we should be doing, when you do distributed renewable energy through geothermal, through wind, you actually have high paying jobs, but they’re distributed and they’re long-term. The Site C jobs are short-term and temporary.

“But creating jobs by throwing money into the air so that we can lose money makes no sense,” Weaver said.

Meanwhile, the District of North Saanich will be asking local governments across B.C. to once again pressure the province to halt construction of the dam and have it scrutinized by the BC Utilities Commission.

North Saanich representatives will ask delegates at this year’s Union of B.C. Municipalities meeting in Victoria Sept. 26-30 to vote on the motion.

Mayor Alice Finall said the joint review panel on the project called on the government to take that action, and dismissed the province’s position that it would be a duplication of process.

“The panel said they didn’t have the expertise or I suppose the depth to actually get into the full environmental and other (economic) issues, and recommended it go to the utilities commission, who does have that ability and power. So there’s no repetition,” she said.

Roughly 40 per cent of the district’s land is in the agricultural land reserve or being farmed, Finall said.

“As a council, and certainly as a community, we are very concerned, firstly with the agricultural issues there, the terrible devastation and loss of agricultural land,” she said.

A committee struck to review resolutions put forward at the UBCM convention recommends local governments to endorse North Saanich’s resolution, noting a similar resolution was endorsed at the convention in 2015. Energy Minister Bill Bennett rejected the resolution, and will likely do so once again this year.

However, Finall said the UBCM has had an impact on provincial policy in the past.

“We have had some effect on provincial policy, no question. Not all, and, of course, that depends on whatever government is in power,” she said.

“Whether we have any dramatic effect, or minimal or no effect at all, it doesn’t mean we quit trying.”