Not being able to use trucks would cause significant construction delays, Hydro says
Apr 9, 2021 10:49 AM By: Matt Preprost 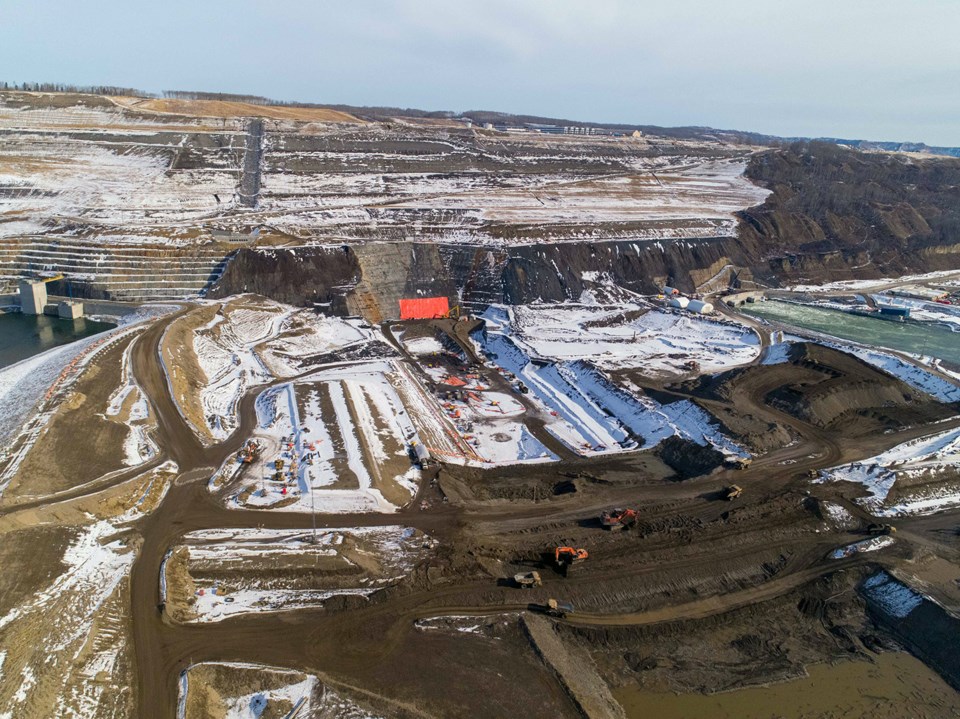 Crews remove a cofferdam in the foreground that separated the right and left bank, with the left bank core trench at top centre, March 2021.BC Hydro

BC Hydro says it now will only need to haul thousands of tonnes of rock materials to Site C by truck in the “unlikely event” its conveyor is shut down for more than three days due to events beyond its control, such as sabotage or an Act of God.

In a March 16 update to local governments, Hydro acknowledged testing of the conveyor last year found electrical problems and that it was unable to handle the required volume of materials to be shipped along the five-kilometre route from its quarry on 85th Avenue.

That prompted a request to the Environmental Assessment Office for permission to ship materials by truck, up to 122 per hour, which drew swift rebuke and a long list of concerns from the Peace River Regional District.

In its update, Hydro said it has been working to fix the conveyor problems throughout the winter, and expects it to be functional 95% of the time, with 5% of downtime due to common maintenance and repairs.

“BC Hydro’s contractor has been undertaking work to resolve these issues through the winter of 2020/2021, and they are expected to be resolved for upcoming seasons,” it said. “As a result, BC Hydro anticipates future conveyor works can be done within a three-day period not requiring hauling.” 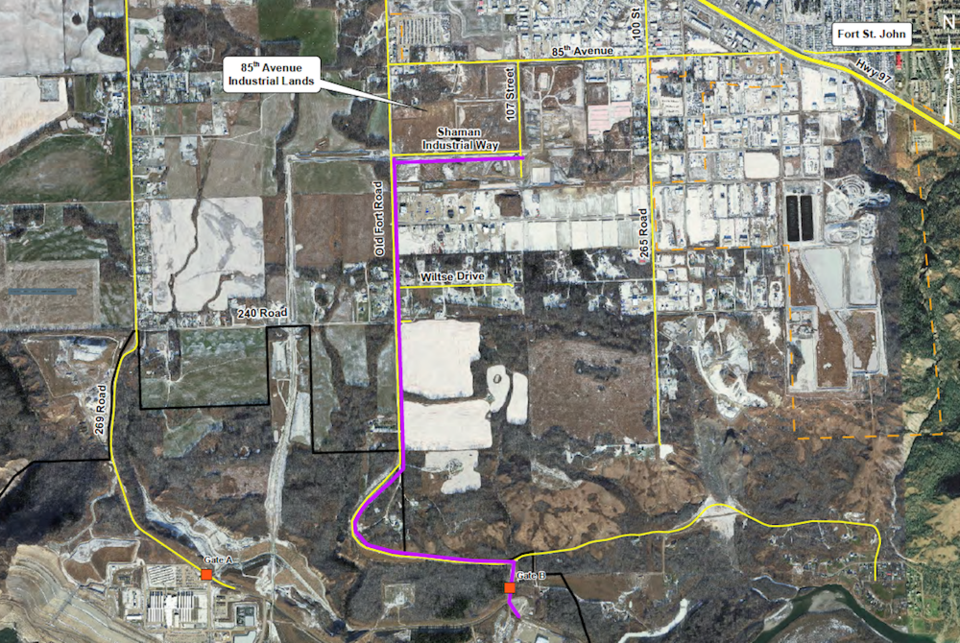 BC Hydro's revised hauling route, shown in purple. By BC Hydro

The 85th Avenue industrial lands next to Fort St. John are being excavated for glacial till, needed to construct Site C's earthfill dam and approach channel lining.

Hydro says it can stockpile four to five days of material at the dam site, which eliminates the need to use trucks when the conveyor is down for common repairs.

But in the event the conveyor is down for more than three days beyond its control — vandalism and sabotage, extreme weather, repair delays and expertise disruption, accidents, or an Act of God — Hydro says it would need to haul 7,600 cubic metres of material per day by truck, the same rate as the conveyor, to maintain its construction schedule.

Hydro says three million cubic metres of till material must be taken to the dam site to meet construction completion dates, and not being able to transport by truck when the conveyor is down would significantly delay the project, it said. 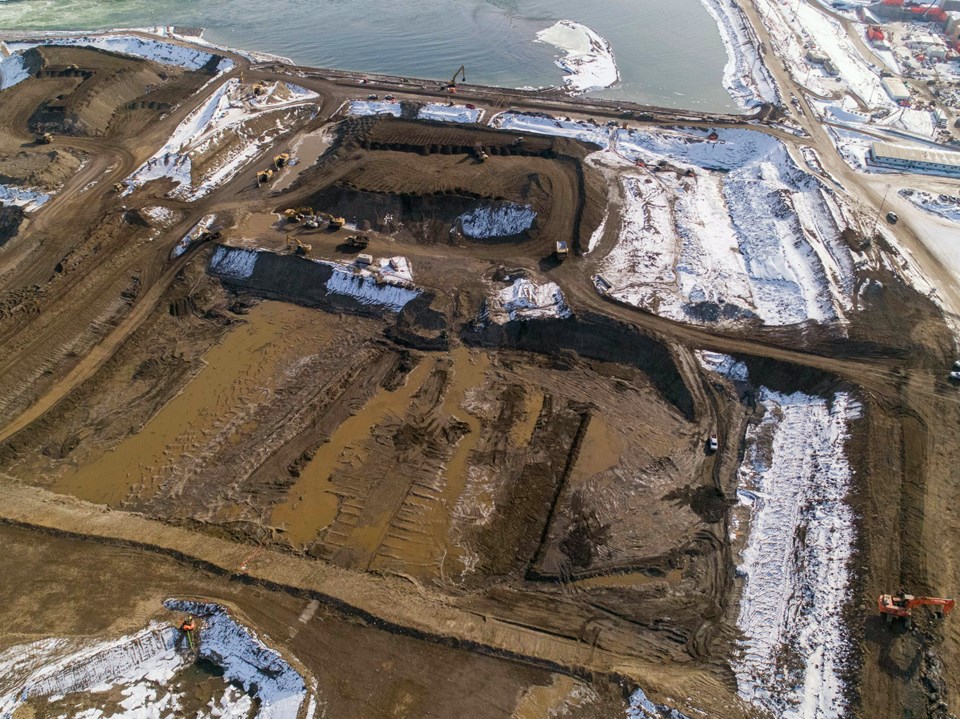 Crews have drained water from the dam core centre at Site C, March 2021. Rip-rap is being placed on the downstream cofferdam. By BC Hydro

“Due to the technical specifications required for the placement of till material and the challenges of operating the conveyor during winter months, transport of material to the dam site can only take place during warmer seasons, between April and October of each year,” BC Hydro said.

“Stoppages to the delivery of material to the dam site during this 7-month window could result in significant construction delays given the limited timeframe during which lost conveyor operating time can be recovered.”

Hydro says it has eliminated the 240 Road from its proposed hauling route, and will instead only use Shaman Industrial Way and Old Fort Road.

Hydro says hauling would create between one to 30 truck driving jobs, as well as required service work.

Contractors would be required to monitor and manage traffic, follow speed limits and school bus hour restrictions, and inspect for road damage during hauling operations, it said.

"BC Hydro will provide funding to support road maintenance beyond typical practices that may be required for the haul route," it said.

Construction of Site C is currently estimated to be generating 45,329 tonnes of emissions per year. Adding more trucks to the road would increase emissions by 1,723 tonnes per year, according to Hydro. 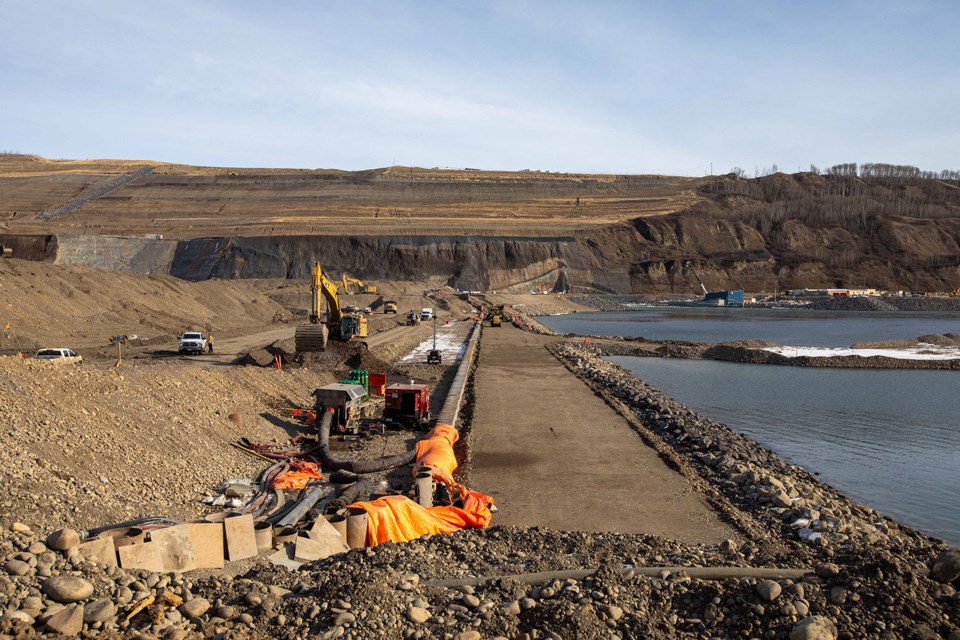