The Peace River Regional District says BC Hydro needs to provide more detail about its plan to use hundreds of trucks per day to haul rock materials down to Site C. The 85th Avenue industrial lands next to Fort St.
Jan 29, 2021 12:55 PM By: Alaska Highway News Staff 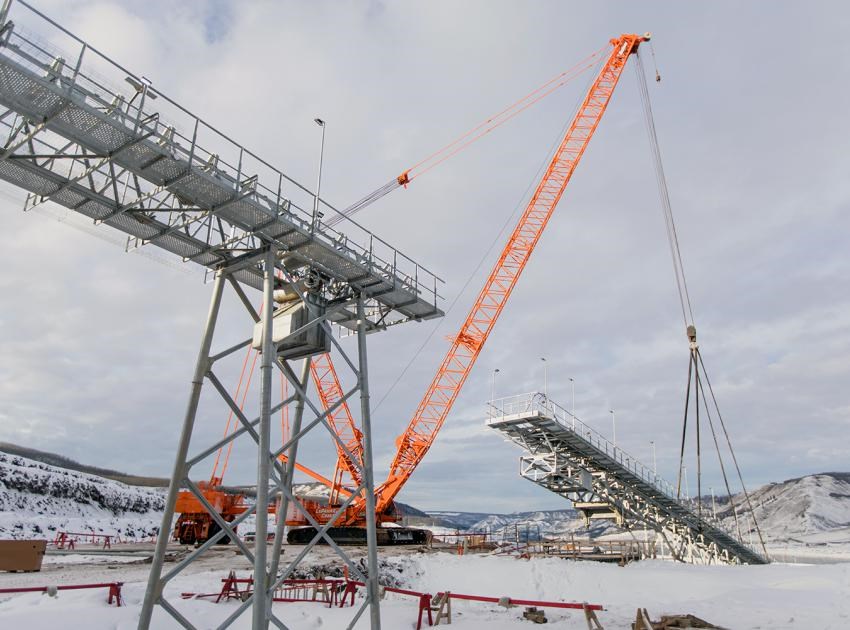 Installing conveyor equipment at the approach channel and powerhouse buttress on the south bank of the Peace River, January 2018.BC Hydro

The Peace River Regional District says BC Hydro needs to provide more detail about its plan to use hundreds of trucks per day to haul rock materials down to Site C.

The 85th Avenue industrial lands next to Fort St. John are being excavated for glacial till, needed to construct the earth fill dam core and approach channel lining.

A five-kilometre-long conveyor has already been built to ship the materials down to the Peace River, but BC Hydro is seeking amendments to its environmental certificate to haul the materials by by dump truck if the conveyor is shut down.

In a Jan. 28 letter to BC Hydro, PRRD board chair Brad Sperling writes that the utility's draft application does not include "supporting verifiable expert analysis" or even any other alternatives.

“This truck hauling application represents a complex and fundamental change to the project that could well have significant adverse impacts on the Regional District and its residents,” Sperling wrote.

Sperling said BC Hydro has provided “imprecise” timelines of the probability, frequency, and duration of any disruptions to the conveyor system. It also hasn't considered stockpiling the till if operations are disrupted, or sourcing the till from another location, he said.

Hauling the materials by truck will have an impact on everything from greenhouse gas emissions to local government revenues, to outdoor recreation and the use of nearby lands by aboriginal groups for traditional purposes.

“In the absence of such analysis of options, it is difficult not to conclude that the sole focus of BC Hydro is to minimize cost,” Sperling wrote.

The PRRD is already pressing BC Hydro for an agreement to address growing construction impacts on local services, including "substantial financial compensation" for landfilling and recycling, and lost property tax revenue.

Many directors, including those negotiating with BC Hydro, seemed caught by surprise by the proposed plan earlier this month.

They've also expressed concerns over dust suppression, traffic safety, emergency access, and the condition of the roads once the hauling program is completed.

Read Sperling’s letter in full below: