BC Hydro says it's speaking with Site C dam protesters and local authorities to try to end a standoff on the south bank of the Peace River. A handful of protesters have been camped at the Rocky Mountain Fort site since mid-December. On Dec.
Jan 6, 2016 8:50 AM By: Jonny Wakefield 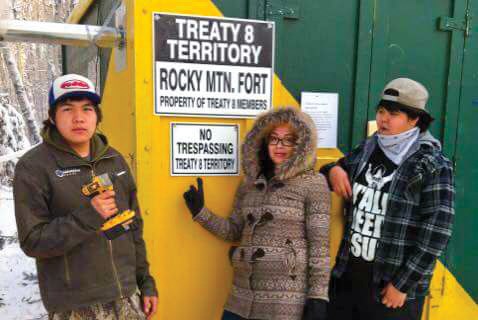 A charter helicopter lifted a survival trailer with a wood stove and bunk house, shown here, to the site in late December. The next day, Hydro posted notice that the area would be cleared for logging.Courtesy of Helen Knott

BC Hydro says it's speaking with Site C dam protesters and local authorities to try to end a standoff on the south bank of the Peace River.

A handful of protesters have been camped at the Rocky Mountain Fort site since mid-December. On Dec. 30, Hydro posted an eviction notice at the camp, and protesters have turned back crews clearing the south bank of the river for construction on the $8.8-billion hydroelectric project.

"We are hopeful this can be resolved," Site C spokesperson Dave Conway wrote in an email to the Alaska Highway News. "We are in discussions with the protesters and local authorities to allow us to resume construction activities. BC Hydro is evaluating all options and will continue to monitor the situation."

Protests are also slated for both north bank entrances of the project Wednesday morning.

Protesters maintain Site C should not move forward until lawsuits aimed at blocking the project are resolved. They also call on Prime Minister Justin Trudeau to take a fresh look at the dam.

Site C opponent Ken Boon, who has been at the camp since last Wednesday, said there were four to six people off and on at the site, which includes a heated bunk house.

He said three Hydro representatives recently arrived by boat to talk about the situation, and then left.

"This is the line in the snow I guess," Boon said. "We're just going to hold down the fort, so to speak."

The area upstream from the Moberly River is slated for logging as part of construction on the dam's south bank.

While protesters turned back logging equipment Monday, they had had no contact with workers as of early Tuesday afternoon.

The temperature sat at around -20 C in the valley, Boon said.

Whether the protest will attract the attention of activists and First Nations leaders in other parts of the province remains to be seen.

Grand Chief Stewart Phillip of the Union of B.C. Indian Chiefs said his organization supported the lawsuits against Site C, adding the project should be reviewed by the B.C. Utilities Commission.

"We take issue with and reject BC Hydro's thuggish tactics in ramming this project forward in spite of the fact there are outstanding court cases," he said. "So there's a good chance I'll be up in the area."

Phillip was arrested at a protest against the Kinder Morgan pipeline in Burnaby in 2014.

It is unclear whether the protest has significantly delayed clearing on the south bank, which is set to continue for the next several months. In court documents, the Crown corporation estimated a one-year delay of Site C would cost $335 million.

Two Treaty 8 First Nations have sought injunctions on the project, which would flood 83-kilometres of river valley.