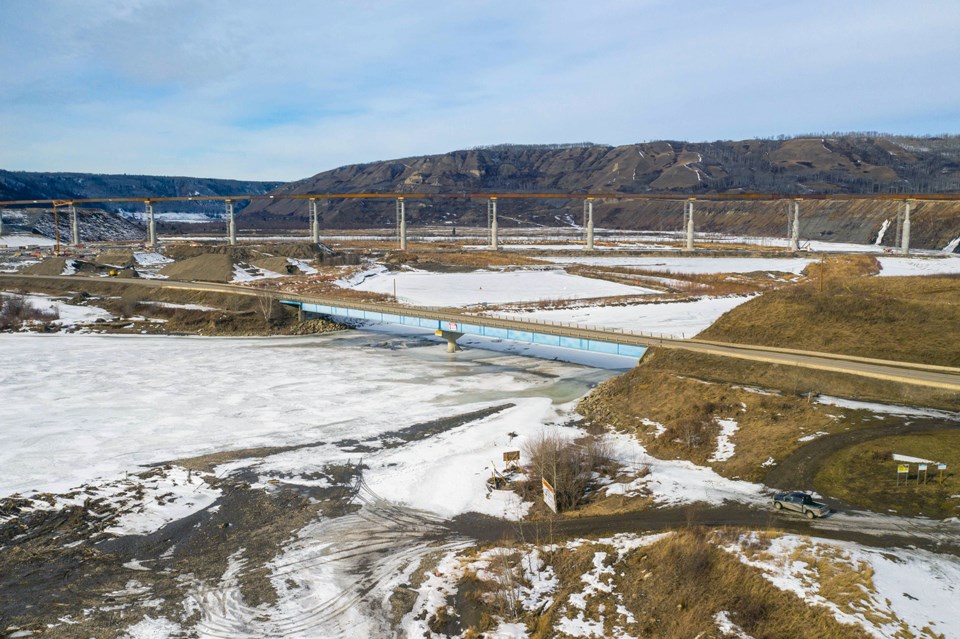 Construction of the new Halfway River Bridge, with the old bridge in the foreground, March 2021. The highest point of the new bridge will be 486 metres.BC Hydro

BC Hydro is looking to move one of three boat launch and day use sites planned along the Site C reservoir.

The company is seeking amendments to its environmental certificate to move a site planned at Cache Creek to the eastern shoreline of the reservoir near Halfway River.

It says an evaluation of Cache Creek found that potential locations “were either not viable or not readily achievable due to geotechnical, environmental, archaeological, property, and/or heritage considerations.”

"As an alternative, BC Hydro has identified a viable boat launch location on the reservoir shoreline east of the Halfway River, near the existing Halfway River boat launch,” Site C Regulatory Manager Karen von Muehldorfer wrote in a March 25 letter to the BC Environmental Assessment Office.

“Establishing a boat launch at this location would facilitate boating and recreational access in the eastern portion of the Site C reservoir and mitigate the loss of access provided by the existing Halfway River boat launch.”

Alternative locations were explored at Watson Spring and Silver Spring, but ruled out over safety concerns due to steep access and potential issues with debris accumulation at the boat launch, according to von Muehldorfer.

A new launch at Halfway River would be situated on the corner of a farm field adjacent to the new Highway 29 alignment, and is not expected to worsen impacts on fish, wildlife, and other ecological communities, von Muehldorfer wrote.

However, there is concern a boat launch at Halfway River could lead to an increase in hunters using boats to access the recently designated Tsaa Nuna Conservancy in Halfway River First Nation, von Muehldorfer noted.

“BC Hydro is working with concerned Indigenous groups to mitigate the potential effects of the Halfway River East boat launch,” von Muehldorfer wrote.

As part of construction on the $16-billion dam project, BC Hydro is required to build three new boat launch and day use sites accessible off Highway 29, to replace existing public boat launches that will be inundated by the Site C reservoir.

Other sites are planned at Lynx Creek and Hudson’s Hope, and all are expected to be complete with with parking, picnic areas, and toilets.