As of July this year, more than 4,600 workers were employed on the Site C hydroelectric dam project, according to BC Hydro, about 3,400 of whom were British Columbians.
Sep 28, 2020 5:21 PM By: Nelson Bennett 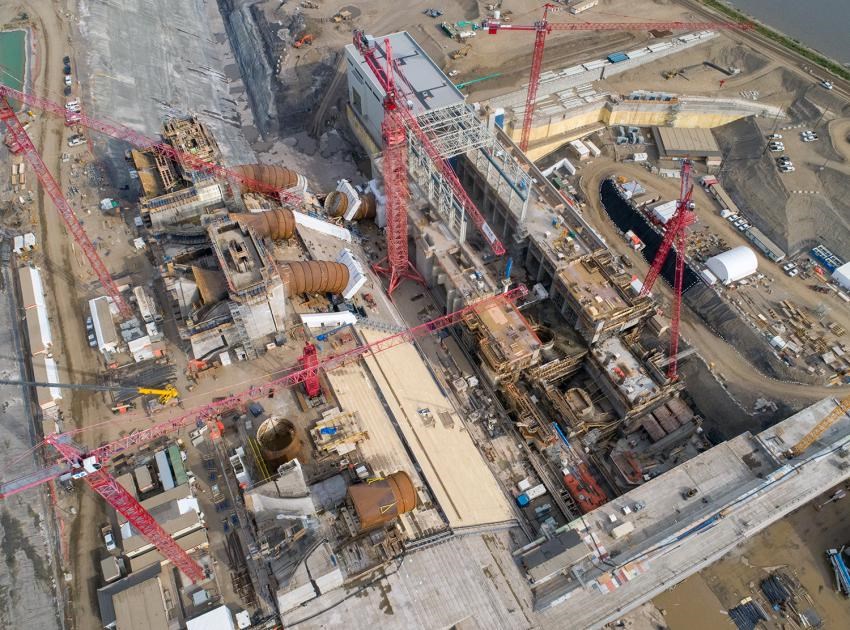 Aerial view of the Site C powerhouse, intakes, and penstocks, June 2020.BC Hydro

As of July this year, more than 4,600 workers were employed on the Site C hydroelectric dam project, according to BC Hydro, about 3,400 of whom were British Columbians.

The Green Party is lobbying the government to lay them off and shut the project shut down, pending an independent review of the project’s costs and progress, or lack thereof.

Green Party Leader Sonia Furstenau is urging the B.C. government to halt the project until geotechnical and cost issues are addressed.

But any further delays to the project would actually increase the project’s costs, as detailed in 2017 by independent reports by Deloitte.

Earlier this year, BC Hydro reported to the BC Utilities Commission (BCUC) that the COVID-19 pandemic, which had required a scaling back of the project’s work force, as well as geotechnical issues, have resulted in uncertainties on both the completion date and final cost of the project.

“While we remain on schedule to achieve river diversion in 2020, there is uncertainty with the project’s schedule and in-service date,” BC Hydro president Chris O’Riley said in a letter to the BCUC. “This is primarily due to our ability to re-start and accelerate work that was halted due to the pandemic.”

In its update to the BCUC, O’Riley warned that the costs of the project “are anticipated to be more substantial than initially expected.”

NDP Leader John Horgan said in August he was “profoundly disappointed” after BC Hydro filed an update with the BCUC that raised concerns about bringing the project – most recently estimated to cost $12 billion – in on time and on budget.

“The government doesn’t even know how to address the problems that have been identified with Site C, much less how much those solutions would cost,” Furstenau said in a news release.

In her news release, Furstenau pointed to a letter written by “experts” who called for the project to be halted.

“The government should follow the advice in this letter and stop digging,” Furstenau said. “We can’t keep throwing good money after bad, especially without knowing whether we can complete the project or what the final price tag will be.

The list of experts includes Marc Eliesen, a former BC Hydro CEO, Harry Swain, a former federal civil servant who sat on the Site C joint review panel, and Mauro Chiesa, who has expertise in large finance projects, including with the World Bank.

Otherwise, most of the signatories to the letter are conservationists, First Nations, and retired politicians who have spoken against the project in the past and who have no particular expertise in the engineering, geotechnical, and financing issues involved in large-scale hydroelectric dam construction.

The letter says that proceeding with the project, given the current concerns about delays and escalating costs, “would be equivalent to handing the project a blank cheque.

“The prudent course of action – one that respects Indigenous and treaty rights as well as the interests of all taxpayers and hydro ratepayers – is to immediately suspend all construction activities at the project,” the letter urges.

“This includes the imminent and critical river diversion. In our respectful view, it is folly to allow that diversion to occur when geotechnical problems of unknown magnitude remain unresolved at the construction site.”

But if the letter’s signatories are concerned about escalating costs, they might want to consider the cost implications of delaying the project any further than it already has been.

In 2017, the BCUC commissioned independent reports by Deloitte to analyze the economics of Site C dam.

The critical river diversion was already delayed by one year after the NDP took power and ordered the Site C dam project to be reviewed by the BCUC, said Mike Bernier, Liberal MLA for Peace River South and critic for Energy and Mines.

River diversions can only be done at specific times of the year, due to fisheries windows, so when a window is missed, the work has to wait for a full year.

Asked to comment on Furstenau’s call to halt the project, Bruce Ralston, the NDP government’s minister of Energy, Mines and Petroleum Resources, said his government never wanted to proceed with the project in the first place.

It only allowed it to proceed because cancelling it would have resulted in a $4 billion write-off in sunk costs, at the expense of either taxpayers or BC Hydro ratepayers.

“We have been clear that Site C is not a project we would have started,” Ralston said in an email to BIV News. “But our government was forced to make a decision looking forward, not back. And we weren't willing to ask British Columbians to take on $4 billion in debt.”

In July, the NDP government appointed Peter Milburn, a former deputy minister of Finance, as a special advisor to review the Site C dam project and provide an independent assessment.

“We take this very seriously, and a re-elected BC NDP government will carefully consider BC Hydro's analysis and Mr. Milburn's advice,” Ralston said.

Bernier said cancelling the project outright would be fiscally irresponbile.

"If the project was cancelled now, you could imagine, if it was three, four billion dollars (in sunk costs) three years ago, would it be double that now? Who knows," Bernier said.