The third Site C contract is in the midst of being awarded, but so far Fort St. John is striking out. One company says that’s because conditions on potential proponents discourage local participation.
Jul 15, 2015 1:06 PM By: William Stodalka 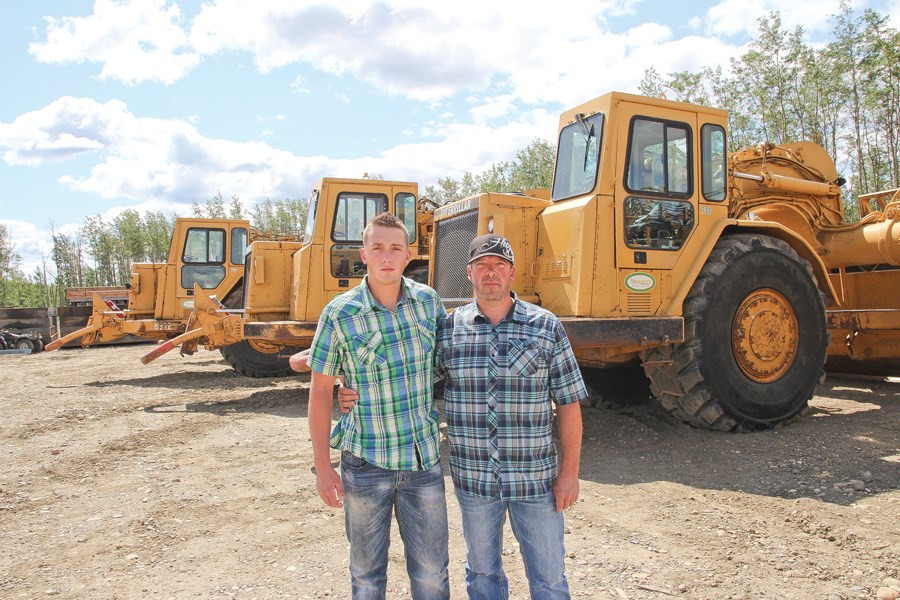 Riley MacLean (left) and his father Guy stand next to some of their company's heavy machinery. Guy would like to see more Fort St. John-based contractors put to work on Site C.William Stodalka

The third Site C contract is in the midst of being awarded, but so far Fort St. John is striking out.

On Monday, BC Hydro chose Alberta-based Morgan Construction as the preferred proponent to prepare the Peace River’s north bank for the dam’s construction.

Six companies have won two contracts for Site C work. Morgan would be the seventh.

Fort St. John is seven kilometres from the dam site.

Spokesperson Dave Conway said BC Hydro is finalizing the contract.

That another non-Fort St. John company has been named a preferred proponent frustrates Guy MacLean, co-owner of Wapiti Earthworks.

He said his company would have been well-positioned to win the contract had Hydro’s conditions not prevented him from placing a bid.

MacLean said that companies who placed bids for the north bank work were required to put up a 10 per cent performance bond. His company could not afford that bond — and he said many other local companies are in the same boat.

“Everyone has an opportunity to bid on it, but it’s not within reach for a lot of local companies,” he said. “The B.C. Liberals and BC Hydro are saying how good it’s going to be for local people for years … just because [Morgan has] an address in Fort Nelson doesn’t technically make them a B.C. company.”

Questions sent to BC Hydro about the bond were not returned.

Wapiti Earthworks is very familiar with the type of work that the north bank contract calls for, according to MacLean.

The company is located along Old Fort Road, just kilometres from where the dam will be built.

According to Hydro’s website, the work involves building about seven kilometers of access road, excavating about three million cubic metres of material, producing and stockpiling about 100,000 cubic metres of aggregate material for use by other contractors and clearing about 115 hectares of land.

Morgan Construction’s head office is in Edmonton. They also have an office in Fort Nelson.

BC Hydro would not release the value of the contract, its timeline nor local employment opportunities.

“We are still in negotiations with Morgan Construction as we work towards a contract, so I will not be providing any additional comments on the north bank site preparation contract at this time,” Conway wrote in an email to Alaska Highway News.

MacLean wants more local involvement in the $8.8 billion project. “It’s just a slap in the face for local people,” he said.