Grand chief to BC Hydro: 'back off'

Updated with a comment from BC Hydro Saying the utility was "reckless" and escalating tensions, Union of B.C. Indian Chiefs Grand Chief Stewart Phillip called on BC Hydro to "back off" a First Nations encampment near Site C dam construction Friday.
Jan 8, 2016 4:01 PM By: Jonny Wakefield 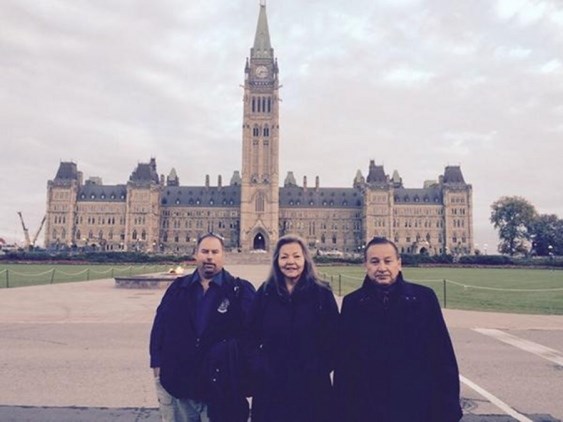 Saying the utility was "reckless" and escalating tensions, Union of B.C. Indian Chiefs Grand Chief Stewart Phillip called on BC Hydro to "back off" a First Nations encampment near Site C dam construction Friday.

On Friday, the UBCIC issued a release supporting a small group of campers living on the south bank of the Peace River at Rocky Mountain Fort, an 18th-century fur trade post that will be inundated beneath the $8.8 billion project's reservoir.

A day after three people were arrested for blocking traffic at worksite entrances on the project's north bank, Phillip wrote the UBCIC is "deeply concerned that BC Hydro's actions are increasing tensions on the ground."

"Further provocations on the part of BC Hydro will only serve to escalate tensions in an already volatile situation." Phillip could not immediately be reached for follow up comment.

In late December, Hydro posted an eviction notice on a bunkhouse at the site, located upstream from the Moberly River. The bunkhouse was reportedly airlifted to the site by charter helicopter.

Dam opponents have since manned the camp around the clock, turning back logging equipment attempting to establish a foothold on the upstream bank of the Moberly.

In an email, Site C spokesperson Dave Conway said that while Hydro has equipment in the area, "we are not moving equipment within the immediate proximity of individuals or the encampment itself."

"Our immediate concern is to ensure the safety of both Site C workers and the protesters."

In the release, Phillip wrote that BC Hydro should cease construction until legal challenges aimed at blocking the dam are decided. He said the project should also be reviewed by the B.C. Utilities Commission, the province's energy regulator. The B.C. government exempted Site C from further review by the commission.

However, Conway said Hydro is within its rights to begin construction, and said the utility is evaluating its options on the camp.

"With all the required permits in place for the work we're doing, we are proceeding with construction work now as we have an obligation to our ratepayers to keep this project on-schedule and on-budget."

Earlier this week, Phillip said he was considering a trip north to support the Rocky Mountain Fort.