An island on the Peace River was logged over the weekend and at least one eagle’s nest was affected, according to Arlene Boon of the Peace Valley Landowner Association.
Sep 28, 2015 5:34 PM By: Bronwyn Scott 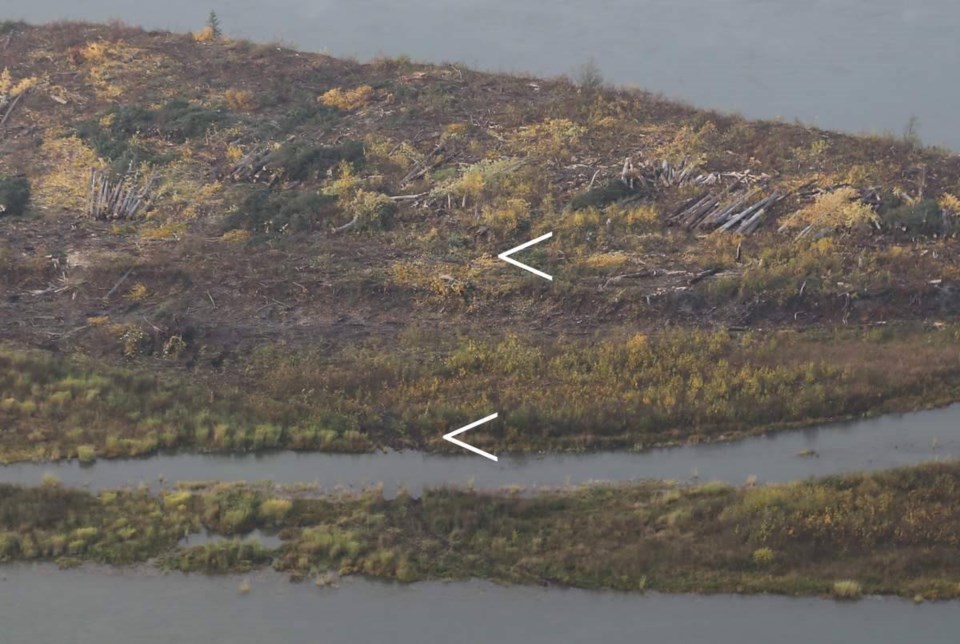 In this supplied image, the top arrow shows the eagle nest in question while the bottom arrow shows where the logging equipment walked through the river channel. Supplied Photo

An island on the Peace River was logged over the weekend and at least one eagle’s nest was affected, according to Arlene Boon of the Peace Valley Landowner Association.

The action has caused some concern among nearby residents who wonder whether or not BC Hydro had all necessary permits to clearcut the area.

“Hydro does have permission to destroy inactive eagles nests. If it’s an active nest... there’s certain procedures that they have to go through,” Boon told the Alaska Highway News.

Boon was concerned whether the nest, where an eagle lived, was considered active if the bird wasn’t nesting. She also expressed concerns around logging procedures.

It’s possible there were monitors he didn’t see.

When questioned on the policy around eagle nests, Site C spokesman Dave Conway wrote in an email that BC Hydro and its contractors will monitor and “take great care to avoid or mitigate effects on active bald eagle nests during Site C construction.” He confirmed that an inactive bald eagle nest was removed last week, consistent with Hydro’s permits.

“A qualified environmental professional was on-site to determine the nest was inactive, and no eagles were present or harmed in the process,” he said.

Hydro acquired permits to move the logging equipment to the island, Conway said.

“Two pieces of logging equipment were moved to the island by crossing the river during the best low water conditions possible, in co-ordination with the Peace Canyon Generating Station,” he wrote. “This was done in accordance with our provincial permits, and an environmental monitor was on site.”

Hydro has said it will install up to 38 artificial nesting platforms designed to attract bald eagles during dam construction. It will also monitor bald eagle nests and mitigation plans annually during construction. Once construction is complete, monitoring will continue for the first 10 years of dam operations.