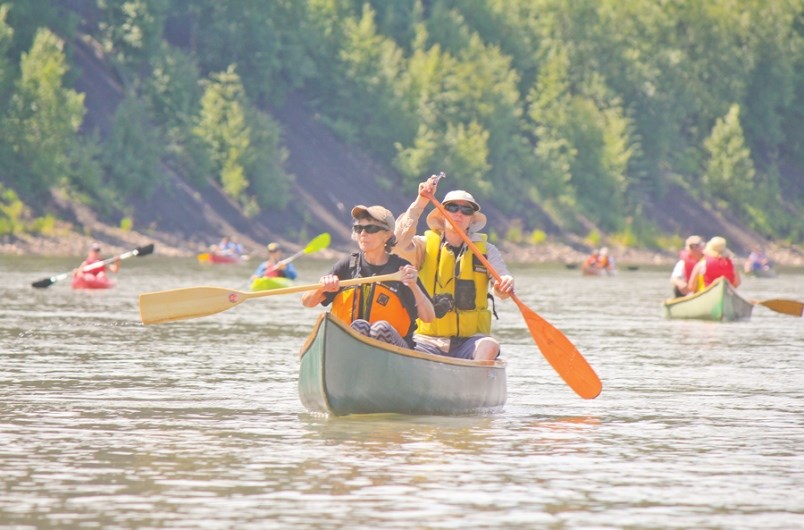 In with the rain and out with the rain—the fact that this year’s Paddle for the Peace was bookended by a pair of thunderstorms was not lost on organizers and leaders, who revelled in the symbolism and renewed hope at this year’s event.

Hundreds once again gathered along the shores of the Peace and Halfway Rivers for the 12th annual event on Saturday, July 8 to celebrate  the river and condemn the politics behind the controversial Site C dam, now two years under construction some 40 kilometres upstream.

The day was hot and sunny, with the mercury reaching 25 C, hours after thunderstorms dropped 12 millimetres of rain on the region the previous night. Another four millimetres was dropped during a storm on Sunday.

“We’re here in a new light of day today. I’d say it was a blessing we had last night,” West Moberly First Nation Chief Roland Willson told the crowd. “I am so grateful to everybody here who helps us with this.

“(The river) is not a commodity. It should be a commodity the way it exists now,” he said.

Opponents of the dam have found blessing in more than just the rain. A new Green-supported NDP minority government, due to be sworn in July 18, has pledged to immediately send the dam for an economic review by the BC Utilities Commission (BCUC)—a key piece of oversight in the dam’s approval process that was eliminated by the outgoing BC Liberal government. The move has been widely criticized by opponents, and even by the chair of the federal-provincial review panel tasked with carrying out an environmental assessment on the project.

Still, many questions remain, and speakers at this year’s paddle took to the mic to speak to the importance of the utilities commission moving forward.

Ken Forrest of the Peace Valley Environment Association said the commission must act with “unbiased honesty, professional integrity, ethically sound economic principles, and with a long-range cultural and economic vision.”

“The Site C boondoggle is almost over if the BCUC does the right kind of things,” he said.

“If we get that we will paddling down the Peace in celebration every year.”

This year’s event saw paddlers from as far away as Mexico, Germany, Manitoba, and Ontario take part. There were no familiar BC NDP faces in the crowd, while the BC Greens send a representative on the party’s behalf. Union of BC Indian Chiefs Grand Chief Stewart Phillip and his wife Joan once again attended the event, along with executives from Amnesty International.

Federal Green Party leader Elizabeth May marked her second year at the paddle, bringing with her a hand-carved oar she received at last year’s event. She had hoped to gift it to Prime Minister Justin Trudeau during a meeting to discuss the dam.

“I still consider him a friend, we have a good relationship, but ever since I started asking for a meeting to discuss Site C I haven’t been able to get a meeting,” May said.

For Ken and Arlene Boon, whose expropriated land at Bear Flat once again served as the takeout, many questions about their future remain as the new BC NDP government transitions to power. Outgoing Premier Christy Clark had extended the Boon’s lease with BC Hydro to stay in their home until July 15. But the family has had no indication yet of whether they’ll be given a further reprieve from looming Highway 29 realignment work.

NDP leader John Horgan won’t be sworn in until July 18.

“One of our members wrote a letter to John Horgan asking for an indefinite extension until these issues are resolved, and, of course, the challenges to this road alignment that are causing our problem here,” said Ken Boon.

“There’s a lot up in the air, but we’re quite confident we will get an extension now. It doesn’t seem very likely the NDP and Greens would be kicking us out of our home after this. We’re not losing sleep over it.

“We’re hoping for some word this week just to confirm that they’re not going to be knocking on our door on the morning of the 16th, which is Sunday morning,” he said.

Boon wasn’t concerned by the lack of provincial politicians who support the cause at this year’s paddle.

“I’d rather they stay in Victoria and get geared up for the change that’s about to happen.”