The geotechnical problemsplaguing Site C can be fixed, and fixed safely, according to dam experts. But it’s going to cost a bundle
Mar 9, 2021 8:34 AM By: Nelson Bennett 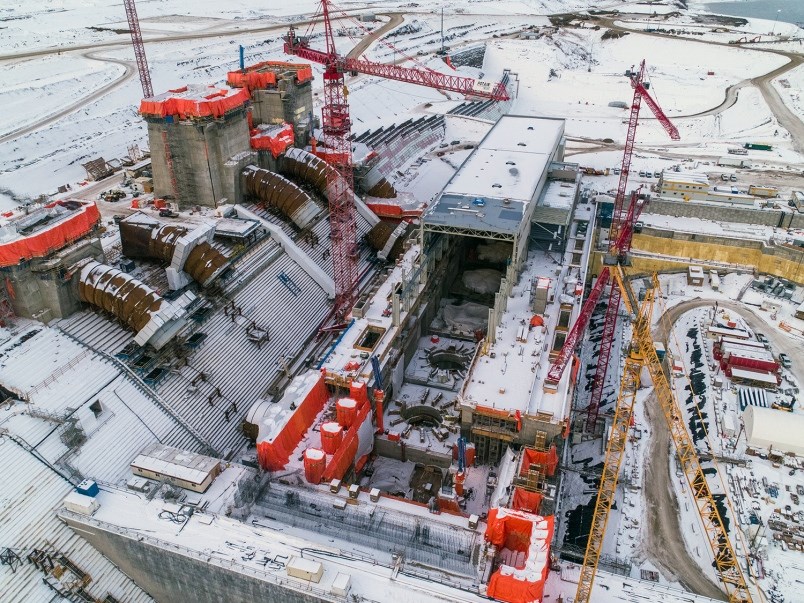 An aerial view of the Site C powerhouse, penstocks and intakes, January 2021.BC Hydro

Building a large hydroelectric dam is no mean feat of engineering.

Rivers must be diverted, temporary coffer dams built, reservoirs excavated and tonnes of concrete poured. And the dam must be designed to withstand a major earthquake.

So many things can and do go wrong – including, for instance, a pandemic – that many big dam projects could be summarized by the movie title A Series of Unfortunate Events.

So when the BC Liberal government was still considering building the Site C dam, critics pointed out that BC Hydro had not built a dam since 1980, when the Peace Canyon dam was completed, and might lack the in-house expertise to complete such a project on time and on budget.

“There’s a possibility that there’s an element of truth to that,” said Dwayne Tannant, professor of civil engineering at the University of British Columbia’s school of engineering. “They’ve got some pretty smart people there, but they don’t have the on-site construction experience anymore.”

Concerns were also raised about the site that had been chosen, given the unstable nature of the silty shale of the Peace River Valley, which is prone to slides.

Sure enough, Site C dam is now projected to cost $16 billion – nearly twice the cost projected when it was sanctioned in 2015 – and be one year behind schedule.

The geotechnical problems now plaguing Site C can be fixed, and fixed safely, according to two dam experts commissioned by the Horgan government. But it’s going to cost a bundle: at least $1 billion.

After subjecting the project to two reviews, Premier John Horgan announced February 26 that the dam would be completed, and found no fault with the engineers and geotechnical experts involved in the project, though he did replace BC Hydro’s board chairman.

A report by Peter Milburn found the Site C Project Assurance Board may have lacked the expertise to provide proper oversight. The Horgan government plans to improve the board’s oversight, ongoing reporting and risk management.

“Mr. Milburn was abundantly clear that there was no malice here,” Horgan said. “There was nothing other than what they characterize as ‘engineer bias,’ which is that there’s no problem that we can’t fix.”

In Site C’s case, contracts for engineering and construction were awarded to a variety of companies and partnerships for various phases of work. Among them are the Peace River Hydro Partners, which included ACCIONA Infrastructure Canada Inc., Petrowest Corp. and Samsung C&T Canada Ltd. (Petrowest, a Canadian company, ended up in bankruptcy.)

Fixing a geotechnical problem that first came to light in 2018 will add at least $1 billion to the project’s final costs. Government officials would not say how much the enhancements will cost, but confirmed that proposed fixes and the delays caused by pandemic restrictions account for about half of the $5.3 billion in increased costs.

When Site C was first proposed, engineers and geotechnical experts had to address the problem of instability in the slide-prone Peace River Valley. Site C’s novel L-shaped design addresses this in part by placing critical infrastructure – a spillway and generating station – on the right bank, where bedrock should make it more stable.

During construction of the buttresses for the spillway and powerhouse, however, monitoring instruments detected small movements – five millimetres at a depth of 35 metres. The buttresses have to be rock solid, as even the slightest movement could damage the powerhouse.

“This discovery raised concerns that further movements could occur when the reservoir is filled, or if excessive water from the reservoir seeps into the bedrock foundation and builds up behind the buttresses,” a government backgrounder states.

Red flags went up, and the BC Utilities Commission (BCUC) was eventually informed that a potential geotechnical problem – one that had been anticipated as a possibility – had materialized and would be expensive to fix.

In light of delays and likely cost escalations, Horgan asked for two reviews of the project to determine if it could be completed without posing any safety risks from a shifting foundation.

One of those reviews was conducted by two dam safety experts – John France and Kaare Hoeg – to assess safety issues. They determined the dam could be built safely.

One of the proposed fixes is to bolster the shear key with 125 pilings – 2.5-metre-wide steel and concrete pillars – a further 15 to 25 metres deeper.

To make the bedrock more watertight, engineers will enhance an approach channel that directs water around an earth-fill dam and into the generating station.

Enhancements will be made to a liner for the approach channel, and drainage will be improved to prevent water from seeping into the bedrock foundation.

“It is a bit disappointing, as a taxpayer, that they can’t get a little bit closer on the ballpark of the cost of these structures,” Tannant said. “It’s a little convenient that they can blame some of this on COVID. I’m sure COVID does drive up the costs. But a lot of that cost is going to be from other things that they just aren’t anticipating up front carefully enough.”