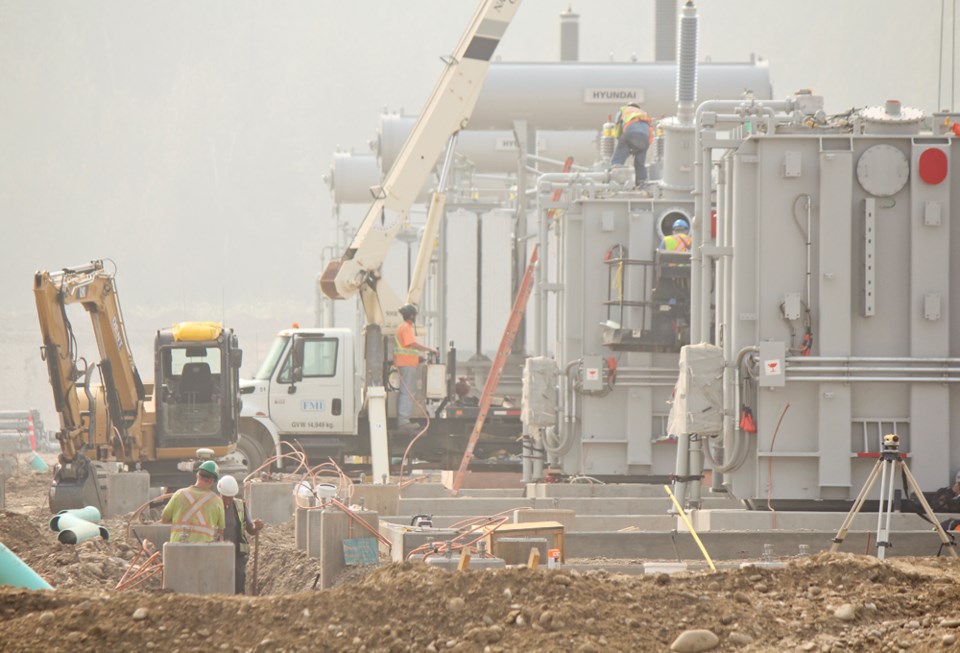 Four years after crews moved in to clear out wild forest along the Peace River, the Site C construction zone is now a sprawling 900-hectare site home to concrete plants and manufacturing shops, and busy with heavy duty trucks hauling dirt and rocks from one place to the next.

"We're on an ancient river bed, a lot of the materials for site are coming off of here," said Dave Conway, community relations manager for the $10.7-billion project.

"The gravels that are here are being sorted, they're being crushed, and they're being developed into materials that are needed for various things like roller compacted concrete, or shotcrete, or concrete materials itself, or for roads. There's lots of different activities going on."

Most of the primary contractors for the dam are on site, including Peace River Hydro Partners, in charge of building the actual dam and its civil works; Voith Hydro, which is custom building the turbines and generators to suit the dam's location on the Peace River; the Aecon-Flatiron-Dragados-EBC Partnership, which is currently building its shops on site and will build the the generating station and spillways.

A number of other contractors and subcontractors are on site, servicing a 1,600-person work camp running at 83 per cent capacity, building a new substation, clearing transmission line right-of-ways. Elsewhere, archaeologists continue heritage investigations, geotechnical crews study plans to realign six sections of Highway 29 away from the planned reservoir, and quarries operate near Charlie Lake and south of Chetwynd.

Some 3,150 workers are reported to be working on the project, most on site itself, while others work in different parts of the province, such as Conway in Prince George, or in Vancouver, where engineering and project staff are largely based.

Key to the project is diverting the Peace River in 2020 so work on building the actual kilometre-long, 60-metre high dam can begin. Though construction started in earnest in 2015, BC Hydro has been testing the dam site since the mid to late-1970s, Conway said.

"We know what rock is here, so we're not looking for bedrock," Conway said.

"The dam is going to rest on shales, and the powerhouse and spillway structures are going to be anchored into shale materials as well. We know what they look like, because there's hundreds of drill casings here."

While BC Hydro has signed benefit and work agreements with a number of area First Nations, West Moberly and Prophet River return to BC Supreme Court Sept. 4 looking for an injunction to stop work at key sites throughout the region until their lawsuit alleging treaty rights infringement can be fully heard.

One of those sites is Bear Flat, where the province directed BC Hydro to investigate alternatives to one Highway 29 realignment to avoid First Nations cultural areas, including a burial site. The highway at Bear Flat needs to be realigned before the river diversion in 2020 as it will be flooded out.

Conway said BC Hydro has met with landowners and First Nations, and that a decision on a new route is expected in the fall. He declined to comment on the injunction before the courts. If granted, it could delay the project by years as the treaty rights infringement trial is heard.

BC Hydro has one request for proposals outstanding for balance of plant to complete construction of the generating station and spillways, for instance.

Work on the project is seasonal — roller compacted concrete work can only be carried outing warm weather, while forest clearing takes place in the winter. Conway, however, predicts the workforce to increase as construction progresses and contractors like the AFDE Partnership gear up for their portion of the work.

See a photo gallery of work below.