Completing Site C dam will only make economic sense if serious efforts are made to decarbonize the Western Canadian economy and if B.C.
Dec 8, 2020 2:05 PM By: Nelson Bennett 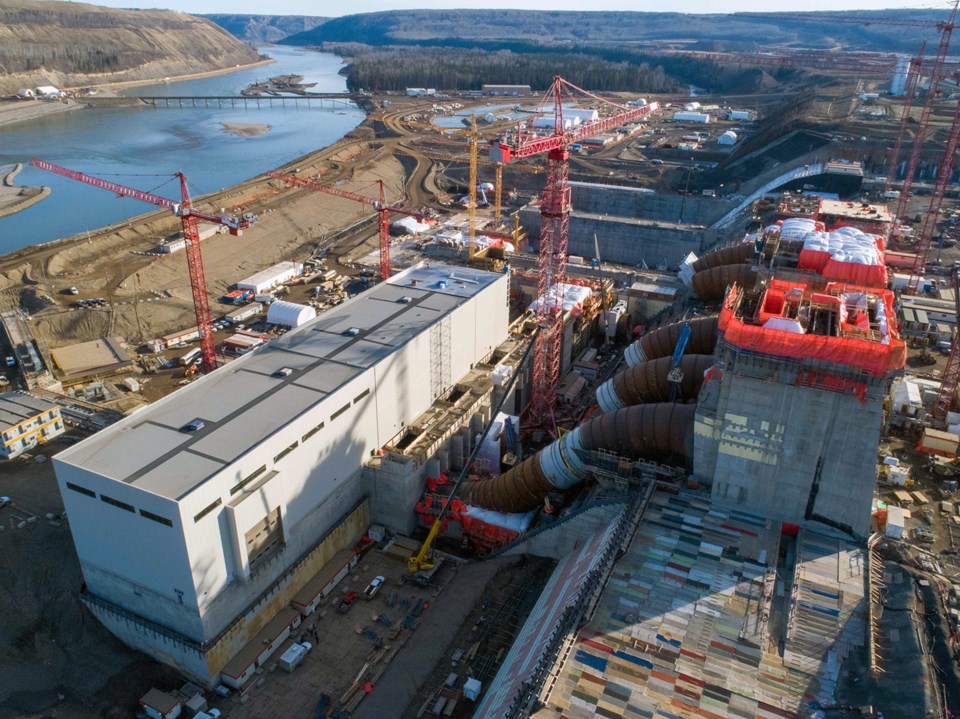 Aerial view of the Site C powerhouse, penstocks, and intakes, October 2020.BC Hydro

Completing Site C dam will only make economic sense if serious efforts are made to decarbonize the Western Canadian economy and if B.C. and Alberta agree to beef up interprovincial transmission, according to a new study by three Canadian economics and public policy academics.

Brett Dolter (University of Regina), G. Kent Fellows (University of Calgary), and Nic Rivers (University of Ottawa) used levelized costs and net present value measurers to compare the value of power from Site C and concluded that, given the likely cost overruns of the dam project, it would be more economic in the long-run to cancel it now.

That’s unless its value can be maximized, and that will require more agressive decarbonization (including increasing carbon taxes) and co-operation between Alberta and B.C.

“The net benefits of Site C depend on the ambition of decarbonization efforts as well as the degree of inter-provincial transmission cooperation between Alberta and British Columbia,” they conclude in their study.

"Part of the B.C. government’s deliberations on the future of Site C should include a conversation with Alberta on the ability to coordinate interprovincial transmission and decarbonization of the electricity sector."

Alberta plans to phase out coal power before 2030, and appears to be on track to accomplish that even sooner than 2030.

Phasing out coal power will require new cleaner power sources. While some of that new power will come from renewables, and natural gas, some could also come from B.C., where hydro dams provide a storage solution of sorts for intermittent sources of power like wind and solar.

"There is still a chance the project makes sense on a go-forward basis, but only if these western provinces can coordinate future electricity plans," the analysis says. "Otherwise policy makers should stop throwing money at a project that is likely to end up under water."

Site C dam was sanctioned by a previous Liberal government. The project was put on hold by the John Horgan NDP government, which referred the project to the BC Utilities Commission (BCUC) for review.

After an independent analysis calculated that it would cost up to $4 billion in sunk costs to cancel the project, the NDP government gave the project the green light to proceed, and approved a budget increase from $8.8 billion to $10.7 billion.

But earlier this year, the Horgan government ordered another review, after it was discovered that the project now faces potential additional costs increases.

“While there are estimates of the cost of the Site C project, the benefits depend significantly on how ambitious western Canada is in its decarbonization efforts, and whether BC and Alberta cooperate on new interprovincial transmission,” the authors conclude.

“If benefits exceed total cost, the project had justifiable economics from the start," the study says. "But if benefits are less than the avoidable costs, the province will lose less value by cancelling the project than by completing it.”

The authors acknowledge the value of Site C’s dispatchability: i.e. the ability to produce power when it is needed and most valuable.

"Site C is both low emissions and 'dispatchable' meaning that operators can decide when it should generate electricity. This allows it to balance the variability of renewable energy generation sources such as wind, which becomes more important at high levels of decarbonisation."

Carbon taxes and decarbonization policies will also need to be more stringent to make the dam worth completing. The authors note that a carbon tax of $50 per tonne and the BC Clean Energy Act only achieve GHG reductions 21%.

"At this level of decarbonization, Site C is uneconomic and should not be completed. Only when decarbonization efforts increase to 80% and beyond does completing Site C deliver an economic benefit greater than the avoidable cost, and in that case, only when new transmission links can be built between Alberta and BC."

A review of Site C dam by former B.C. bureaucrat Peter Milburn on Site C dam is expected in the coming weeks.