On her last day in the Peace River Valley, botanist Erica Wheeler finally spotted the elusive species she had sought. There it was, in full flower, on the Boons’ farm. The brittle prickly pear cactus, Opuntia fragilis .
Jun 2, 2018 8:38 AM By: Sarah Cox 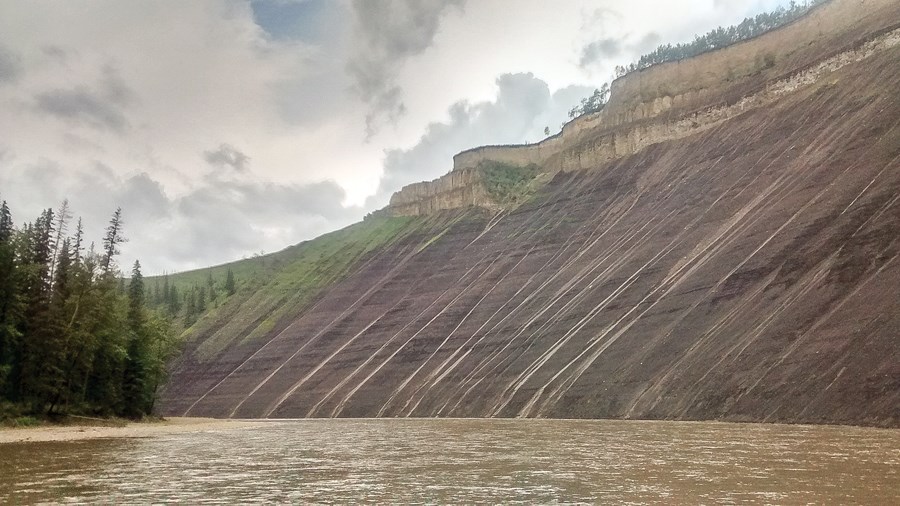 In 2015, scientists surveyed areas like this that would be affected by the proposed Site C dam.Reg Whiten

On her last day in the Peace River Valley, botanist Erica Wheeler finally spotted the elusive species she had sought. There it was, in full flower, on the Boons’ farm. The brittle prickly pear cactus, Opuntia fragilis. It looked as though someone had stuck a frilly yellow rose on a stubby cactus spiked with needles. With a nod from Arlene Boon, who had led Wheeler through native grassland to this concealed spot along Cache Creek, the botanist scrambled down the sandy embankment to survey her find.

The flower’s outside petals were almost sheer, its centre deep yellow like a yolk. Wheeler, the botany collections manager at the Royal BC Museum in Victoria, needed only a second’s prompting from Arlene to pull out her sampling knife. Carefully, she sliced the cactus near its base, leaving roots to grow other stems, fruit, and flowers. Then she tucked the sample into her plastic collections bag. It would be dried in a press for several days and shipped back to the museum by Greyhound bus, in the company of hundreds of other plant specimens that Wheeler and other museum botanists had collected during five memorable days of sampling in the Site C flood and erosion zone.

It reassured Arlene to know that somewhere in a metal cabinet in a museum 1,300 kilometres away, a small token of her family’s land would remain for future scientists to study. She asked Wheeler to record that the cactus had come from Cache Creek, a Peace River tributary whose lower reaches – a full 9 kilometres – would be swallowed by the Site C reservoir. The area around the creek had yielded natural gems many times already: a sliver of woolly mammoth tusk, the fossilized bark and cast of a cycad tree trunk, fossil shells of ancient gastropods and clams, the tracks of an ancient three-toed reptile. Some had been found in the nine hundred designated areas of “paleontological sensitivity” that would be lost to Site C, three hundred of which were classified as highly or extremely sensitive.

Almost a decade earlier, in a natural gully on the Boon farm, one of Wheeler’s colleagues, Royal BC Museum scientist Richard Hebda, had stumbled upon the eleven-thousand-year-old fossilized bones of a dozen taiga voles, a species unknown in BC in historic times. The hamster-sized vole, with brightly coloured cheeks and a delicately pointed snout, is plentiful in the Far North, where it burrows in boreal forests. But on only one other occasion had taiga vole fossils been discovered so far south in Canada, suggesting that the furry species was at the fringe of its range in the Peace River Valley even in the Late Pleistocene epoch. In this regard, the taiga vole shared a curious affinity with the cluster of cacti that Wheeler, the prickly-pear sample now safe in her collections satchel, stooped carefully to view.

Wheeler was not interested in the brittle prickly pear cacti on the Boons’ farm because the species is rare or endangered. Indeed, it is common in western North America and has a generous range that extends from Washington State to Wisconsin and from Texas to BC. What piqued Wheeler’s scientific interest was its remarkable location: on the dry skirt of a Peace River tributary, at a latitude of 56.17°N, farther north than Moscow.

The prickly pear populations on the threatened slopes of the Peace River and its tributaries are part of the northernmost occurrence of this species. They also represent the northernmost of any of the planet’s 1,800 species of cactus (Cactaceae). Most of the world’s cactus species grow in arid regions. Only a small fraction of them are found in Canada.

According to Wheeler, the fragile prickly pear populations in the Peace River Valley are “a unique slice of global Cactaceae biodiversity.” She wrote about her find in a national newsletter for Canadian scientists, highlighting that “this is a good reminder that it’s not only the rare and the beautiful that deserve our attention but also the tenacious outliers that have a story to tell about life on the edge.”

Scientists are discovering that the Peace River Valley is home to a surprising number of tenacious outliers. Some, like the prickly pear cactus – and a carnivorous pitcher plant, and wild chives with their distinguishing purple flower spheres – are recognized far outside the scientific community. Other botanical outliers, including rare mosses and lichens with endearing names like snow-white dimple, are known mainly in botany circles. But however famous or obscure they are, these plants share a common bond: they represent important range extensions for the species or the family.

In addition to gems long known, the Site C flood zone constantly reveals new biological treasures. Since 2014, scientists have discovered outlier bee, bug, spider, and snail species, including a species of spider previously known only from records in Florida and New York State. Studies that BC Hydro was obliged to conduct in preparation for Site C found a green-eyed dragonfly named Whitehouse’s Emerald that had never been spotted east of the Rocky Mountains before it was encountered in the Site C flood zone. A second dragonfly species, the Crimson-ringed Whiteface, documented at four sites in the future reservoir area, had been recorded east of the Rockies only once before.

According to scientists like Wheeler and Hebda, the Royal BC Museum’s curator of botany and earth history, outlier populations are the flashing beacons of specimen collection. Studying outliers can lead to exciting discoveries as scientists probe what, exactly, enables them to live at the edge of their range and adapt to different climates. Outliers may even offer a snapshot of evolution at work. They are found in extreme locations like the Peace River Valley for one of two reasons: they are either extending the range of their species or they are remnants of past populations. Just as the brittle prickly pear cactus populations in the Peace push the limits of a largely southern species north, the carnivorous pitcher plants found in the valley shift their species’ southern boundary a little farther to the west.

Outliers offer a glimpse of future biodiversity in a warming world and help answer questions that intrigue scientists. How does a particular species like the fragile prickly pear cactus evolve to adapt to a changing climate? Which species are likely to survive global warming, and how? Everybody knows a cactus, but the smaller outlier species that we don’t commonly recognize often reveal the most to science. The surprising bugs and spiders that were discovered in the Site C flood zone in the summer of 2015, only weeks before clearing for Site C began, piqued the interest of scientists across the country. As Hebda explained, “They’re a reflection of the things we don’t see, where a lot of the action can be, in the insects and spiders, in the fungi and other soil organisms.” That action is evolution, or changes in the genetic traits of species that are passed down over multitudes of generations.

Sarah Cox travelled to the Peace River valley in 2013 to chronicle the revival of the Site C dam, and the farmers and First Nations who resisted against it. Her four years of work since has resulted in Breaching the Peace: The Site C Dam and a Valley’s Stand Against Big Hydro, published by On Point Press, a trade imprint of UBC Press, and released in May.

Cox will hold a book launch in Fort St. John on Tuesday, June 5, at the Fort St. John North Peace Museum. Doors open at 6:30 p.m., with the event to start at 7.

The excerpt above has been reprinted with permission.