Three protesters arrested for blocking traffic at a Site C dam protest were released from cells at the Fort St. John RCMP detachment Wednesday night.
Jan 7, 2016 10:13 AM By: Jonny Wakefield 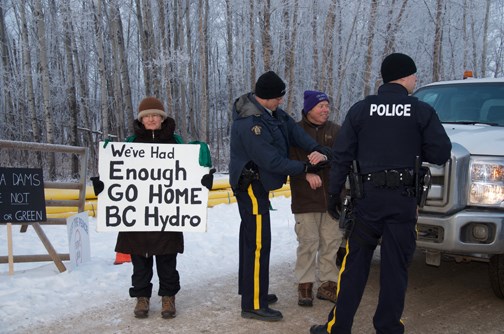 At least one, former regional district director Arthur Hadland, says he is being charged with mischief and was held for eight hours.

Hadland was arrested blocking traffic at an entrance to the dam worksite, part of a peaceful protest against the $8.8 billion hydroelectric project which will flood the Peace River Valley.

Also arrested were Penny Boden and Mark Meiers, who was taken into custody at another demonstration in December for a one-man blockade of the site.

The protesters say the dam, the largest and most expensive in B.C. history, should not move forward without resolution of First Nations and landowner lawsuits aimed at blocking the project. They've called on the new federal government to review previous government decisions to approve Site C.

The most recent round of demonstrations are to support campers at the Rocky Mountain Fort, a historic site where protesters are blocking logging equipment on the Peace River's south bank.

Hadland said he didn't want to dwell on the arrest, saying "the whole point of the exercise was to draw attention to (how Site C) is disrespecting the larger North Peace community."

"They're treating us like a colony here. I think there's a gradual awakening to the fact we've got a public utility that's out of control."

Hadland said he was initially told he would not face charges. That changed several hours later.

Meiers said the three were told to appear for a court date in February, but was unclear whether he had been charged.

"We're supposed to appear in court Feb. 24, the three of us, and I presume that Hydro has filed a formal complaint against us. That's as far as I can go with that because I don't know."

Police were not immediately available for comment Thursday morning.

Boden, a local artist, said she was frustrated as work continues on the site unabated.

"We have the right to peaceful protest in Canada, but it hasn't done us a whole lot of good," she said of protests so far.

"We stand there and peacefully protest while they destroy the valley. Those that want to save the Peace River valley are not going to give up."

"I will have to speak to our team to answer the question about whether the protests at the gate had any impact on today's planned construction activities," he wrote in an email.

Meanwhile, dam opponents are organizing trips to the remote Rocky Mountain Fort to resupply the camp with food and relieve the people living there.

The group of mostly First Nations people is calling itself the Treaty 8 Stewards of the Land, according to a statement, and say they "will not permit BC Hydro to proceed with plans to clear-cut forests around the Rocky Mountain Fort."

They say they are "prepared to face arrest" to "protect their traditional territory."

The group says the dam will impact treaty rights to hunt, fish, trap and engage in other traditional activities.

How Prime Minister Justin Trudeau handles the dam will be "a critical litmus test of his government's promised new relationship with Indigenous Peoples."

The fort, at the mouth of the Moberly River, lies more than 80 kilometres north of Chetwynd on the Jackfish Lake Road, much of which is unpaved and unplowed.

There were between four and six people at the camp at last report.

Art Napoleon, a Saulteau First Nations member, was among those who helped set up the encampment.

"Before, it was a lot of talk, a lot of rhetoric. Now, people are finally taking some action," he told the Alaska Highway News.

"I think there will be a lot more, there are a lot of people who have been riding the fence," he said. "They've been told 'oh this is a good deal, we get this work.'"

He added that the development would open up the back country with roads and right-of-ways for power lines, contributing to the "obliteration" of lands and animal populations.

Whether Hydro will seek a court injunction to remove the camp remains to be seen.

"At this time, there are a small number of protesters who have set up a camp on the south bank of the dam site," Conway wrote. "We are hopeful this can be resolved."

"We are in discussions with the protesters and local authorities to allow us to resume construction activities in this area."

He said all other construction work on Site C continues.

"BC Hydro is evaluating all options and will continue to monitor the situation."