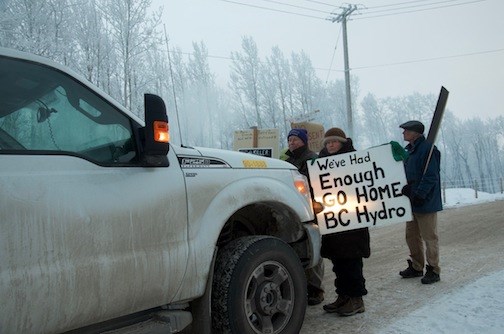 Protestors on the 269 Road blocked traffic from entering the Site C dam work site for about an hour before police arrived Wednesday.Bronwyn Scott

In a release at 6 p.m. today, RCMP confirmed three people had been arrested for blocking trucks at an entrance to the work site.

A man was arrested for blocking traffic at a protest in December for breaching the peace. However, he was released hours later without charges. As of press time, at least one of the protesters had not been released from the Fort St. John RCMP detachment.

“The RCMP respects the right to democratic and lawful protest and even facilitates that right, while protecting any members of the public who may be attending events related to this dispute,” Detachment Commander Insp. Mike Kurvers said in a release. “In this case, we are enforcing the criminal code and are investigating any and all complaints.

“Where sufficient evidence exists to support criminal charges, information will be forwarded to Crown Counsel for consideration of charge approval.”

Hadland’s cousin Randal visited the RCMP detachment but couldn’t get any information about his status.

"They wouldn't even tell us if he was in there," Randal Hadland said this evening, adding his cousin’s wife had yet to hear from him.

Police were called to the site several hours later and arrested two more people for refusing to move off the roadway.

The protest was in support of the Rocky Mountain Fort, a protest encampment established on the south bank of the river that is blocking construction activities.

The $8.8 billion dam is the largest infrastructure project in B.C. history