District of Taylor council approved sole-sourcing two contracts to Urban Systems to design the infrastructure for the Parcel Z subdivision as well as road and sewer work for Pine Avenue West at their meeting Feb. 19.
Feb 21, 2018 5:42 PM By: Alaska Highway News Staff 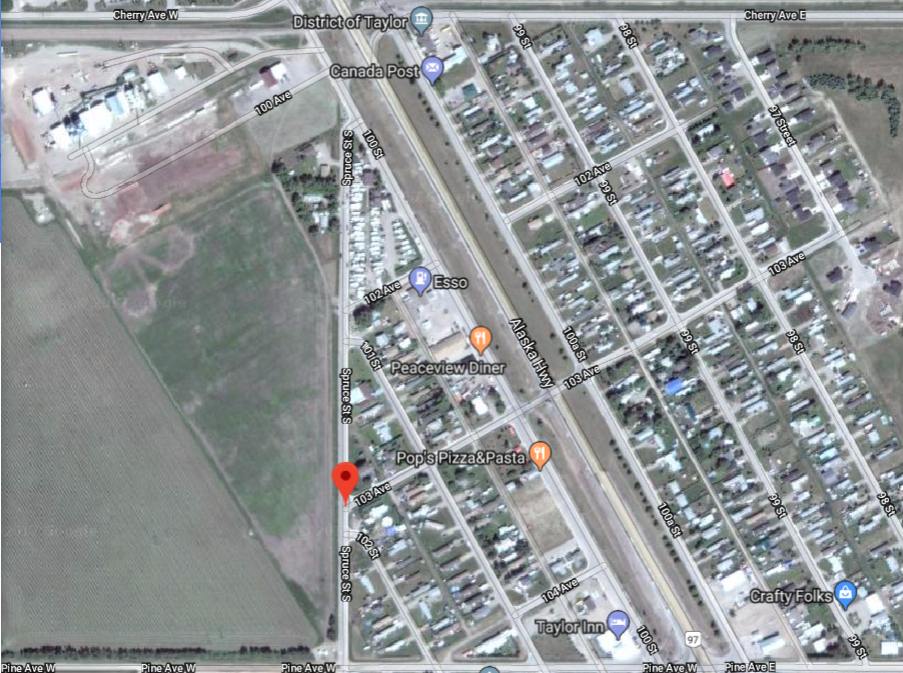 A satellite view of the District of Taylor, with Parcel Z on the left.

District of Taylor council approved sole-sourcing two contracts to Urban Systems to design the infrastructure for the Parcel Z subdivision as well as road and sewer work for Pine Avenue West at their meeting Feb. 19.

Councillors approved the contracts ahead of finalizing this year’s budget so the designs will be ready for tender in time for this year’s construction season.

“We’re all comfortable they’ll be included the budget so we moved forward with them,” Mayor Rob Fraser said.

The contract for Parcel Z design is valued at $190,500, and includes surveying, permitting, and design work needed to service the 50-lot subdivision with roads and basic utilities, as well as gas, hydro, and telecommunications.

Council is waiting for provincial approval of a loan bylaw to borrow the estimated $4.2 million needed to carry out the construction.

A response is between four to six weeks away before the bylaw will go to residents for approval. If residents reject the borrowing, the money on the design won’t be wasted, Fraser said. Future councils or private developers could pick it up in the future, he said.

“If the folks of Taylor come out and say, ‘No, we don’t want you to borrow this money,' then you don’t do the work,” he said.

“It’s not a wasted document because that design is for that property. We’re building a shelf-ready plan, which allows us to get ahead of the curve.”

The contract for Pine Avenue West sewer and road design work is valued at $48,500, and will eventually connect to Parcel Z, Fraser said.

Construction would extend from from the 100 Street to the Spruce Street South at an estimated cost of $1.2 million.

Designs for both projects are anticipated to begin as early as next week and be ready by the end of March.