The provincial transportation ministry has three business cases in hand on fixing or replacing the aging Taylor Bridge. The condition of the bridge was a focal point of discussions at a Chamber luncheon in Fort St.
May 30, 2019 2:53 PM By: Alaska Highway News Staff 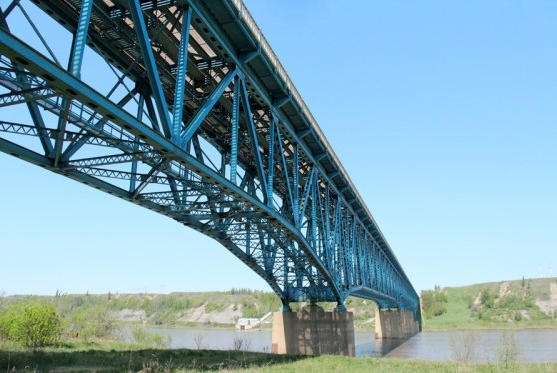 Welding on the Taylor Bridge will slow traffic through the valley this week.

The provincial transportation ministry has three business cases in hand on fixing or replacing the aging Taylor Bridge.

The condition of the bridge was a focal point of discussions at a Chamber luncheon in Fort St. John Thursday featuring Scott Maxwell, the ministry's executive director for the northern region.

Maxwell told the audience they were preaching to the converted about the need for a fix sooner rather than later. But the bridge is the most challenging piece of infrastructure in the region, seeing 6,000 to 7,000 vehicles a day.

There are three main options the ministry has built a business case for, Maxwell said.

"We would like, in a perfect world, to have four lanes all the way from Alberta to Fort St. John," Maxwell said.

"The way we look at it though is if there's going to be a differential from a two-lane structure to a four-lane, and that saves us $100 million over that 700 metres, I'd rather take that $100 million and go build four lanes on the rest of the corridor.

Two lane highways can handle more traffic than many people think, Maxwell said. The need to upgrade to four lanes comes with roughly 20,000 to 30,000 vehicles per day. "We're a long ways out from that," he said.

A third option is resurfacing the steel deck and eliminate the annual welding program, which costs roughly $1 million per year.

The bridge has a steel deck as it's lighter than concrete, and can better handle the wind load funnelling through the Peace River valley. Resurfacing the deck would cost between $80 to $100 million.

"A large part of that is because the structure itself right now can't take the weight load," Maxwell said. "It takes a lot of work to build the structure up to accommodate that."

No decision on what to do with the bridge has been made, Maxwell said. The business cases must first go through the ministry's capital board before the provincial treasury board. Any approved business case will first need funding for design and engineering to get a better estimates on costs.

The ministry has roughly $800 million every year for capital improvements, Maxwell said.

"So the Taylor Bridge, $250 million; that's my thumb in the wind, it very easily could be more," he said.

"So, if that ends up being a $400 or $500 million pressure, you have to have somebody at treasury board, in government, saying, 'Yes, we are prepared to spend half of the ministry of transportation's infrastructure budget on one structure — and that's challenging."

The District of Taylor has signalled its support of four-laning the Alaska Highway through the district if the bridge were to be improved and expanded to four lanes.

"It's value relative to time," Maxwell said. "If we as a region decide OK, we want a four-lane bridge, are we prepared to wait 10 years longer?"

BC Hydro is paying for Highway 29 realignments related to the Site C dam project, which doesn't affect the amount of capital available for any fix or replacement to the Taylor Bridge, Maxwell said.

"Our team does a fantastic job of keeping an eye on it. It's a safe structure. I have no concerns with that," he said.

"But it is becoming certainly more and more challenging thing as time goes on."