LOS ANGELES — Kanye West barely said a word during his album listening session Thursday night, but the mercurial rapper still had most attendees standing on their feet while hanging on every word of his new project.
Jul 23, 2021 10:26 AM By: The Canadian Press 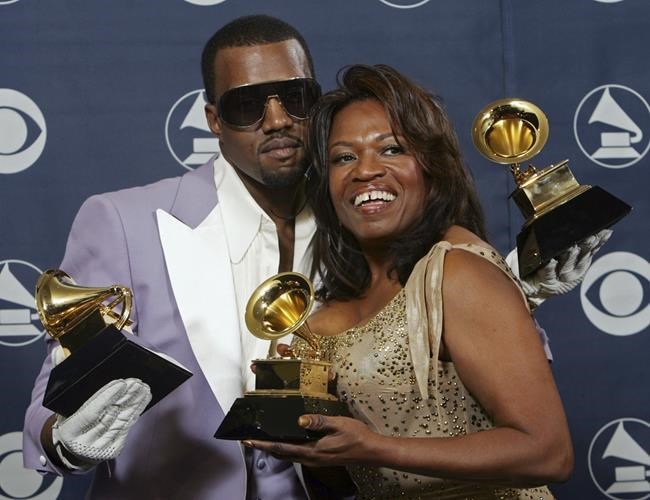 LOS ANGELES — Kanye West barely said a word during his album listening session Thursday night, but the mercurial rapper still had most attendees standing on their feet while hanging on every word of his new project.

West unveiled his 10th studio album, “Donda” in front of a packed crowd at the Mercedes-Benz Stadium in Atlanta. His album was named after his mother, Donda West, who died at the age of 58 following plastic surgery complications in 2007.

Pulling off the listening session — which was livestreamed on Apple Music — was an impressive feat for West, who sold out the venue after he announced two days ago that the first public listen of his highly-anticipated album would take place. Some of the big names who attended the event were Rick Ross, Khloe Kardashian and his estranged wife Kim Kardashian West, who showed up in a red jumpsuit with their kids.

Unlike West’s typical high-energy concerts, he appeared more mellow. He let his music do the talking while most attendees listened in silence and applauded at the end of each track of his album, slated for release Friday, that features gospel themes, hip-hop vibes, his Auto-Tune vocals, a track featuring his friend-mentor Jay-Z and recorded speeches made by his mother.

While sporting an all-red outfit with orange shoes, West sometimes walked, fell to his knees, and pranced around on a white flooring about the size of the football field, where the city’s professional football and soccer teams play home games.

The 22-time Grammy winner revealed in a commercial, featuring U.S. track star Sha’Carri Richardson, during the NBA Finals on Tuesday that his album will be released Friday. The commercial, scored and directed by West, featured “No Child Left Behind,” a song from the album.

When West began playing “No Child Left Behind,” he dropped to one knee before he slightly lifted up into a track runner's stance like Richardson, who will miss the Tokyo Olympics after a positive marijuana test this month. The rapper then stood up and pointed his finger into the air as the words “he's done miracles on me” were heard on the song.

The crowd appeared surprise to hear when Jay-Z began rapping on the final song of the listening session. On social media, the song was lauded for Jay-Z's verse that included “This might be the return of the throne,” a nod toward the tandem's 2011 album “Watch the Throne,” which earned a Grammy nomination.

After the song finished, West made his way toward the end zone area, stared at the crowd for a few moments and calmly walked off the floor as the audience collectively cheered for him.

West, 44, is mostly known as being associated with Chicago, but he was born in Atlanta — a Georgia city where there are no restrictions against large gatherings. He gifted 5,000 tickets to faculty, staff and students from some Atlanta HBCUs including Clark Atlanta, Morehouse, Spelman, Morris Brown and the Interdenominational Theological Center.

West’s new project is a follow up to his 2019 gospel-themed album “Jesus is King,” which won a Grammy for best contemporary Christian album.

Last year, West announced on Twitter — with colorful cover art and a track list — that he would release his latest album. At the time, his tweets indicated that his project would release on the same day as his rival Taylor Swift's project “Folklore,” but his album ended up being postponed.

The two music stars have been in an ongoing beef since West famously interrupted Swift's speech during the 2009 MTV Video Music Awards when she won for best female video. It appeared both put their differences aside after she introduced him when he won the video vanguard award at the 2015 VMAs, but a leaked video clip between both about his controversial song “Famous” caused more drama.

It’s not the first time Kanye has hosted a listening event for an upcoming album. In 2016, he debuted his album “The Life of Pablo” during a massive event and fashion show at Madison Square Garden in New York City. Several big names who attended the show included Kardashian West, 50 Cent, Lil Kim, Caitlyn Jenner, A$AP Rocky and 2 Chainz.

Toronto singer Ralph proving herself to be the Swiss Army knife of Canadian pop music
Aug 5, 2021 11:02 AM