US home construction falls a surprise 9.5% in April

WASHINGTON (AP) — U.S. home construction fell a surprisingly sharp 9.5% in April and economists attributed that partially builders who delayed projects because of a surge in lumber prices and supply constraints.
May 18, 2021 8:01 AM By: The Canadian Press 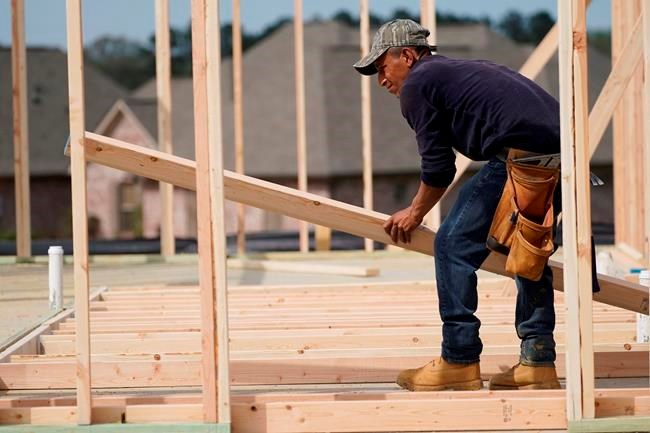 WASHINGTON (AP) — U.S. home construction fell a surprisingly sharp 9.5% in April and economists attributed that partially builders who delayed projects because of a surge in lumber prices and supply constraints.

The April decline left construction at a seasonally adjusted annual rate of 1.57 million units, the Commerce Department said Tuesday. That was down from a rate of 1.73 million units in March, which had been the best showing since the peak of the housing boom in 2006.

Applications for building permits, considered a good sign of future activity, rose 0.3% in April to an annual rate of 1.76 million units, a good sign that the April dip in construction will be temporary.

Economists said the April dip is consistent with reports projects delayed by soaring lumber prices and snarled supply chains that have made it difficult to get products like appliances.

The price of lumber alone has added $35,872 to the price of an average single-family home, according to the National Association of Home Builders. Part of those increases are new border taxes imposed by the Trump administration in a trade dispute with Canada. There was also a temporary shut-down in production when the pandemic hit a year ago.

Even with the higher prices, economists expect housing, one of the stand-out performers in last year's pandemic, will continue to show strength in 2021.

“Strong demand, a need for inventory and homebuilder optimism will support housing starts over the rest of 2021, while record-high lumber prices and supply chain bottlenecks may act as headwinds,” said Nancy Vanden Houten, lead economist at Oxford Economics.

She predicted housing construction would hit 1.6 million units this year, up from 1.38 million last year. That would be the best annual showing since 2006.

The weakness in April reflected a 13.4% drop in construction starts for single-family homes, which declined to an annual rate of 1.09 million units. Construction of apartments with five units or more rose by 4% to 470,000 units.

The April decline in construction was led by a 34.% fall in the Midwest followed by an 11.5% drop in the South. Construction rose 9% in the West and was up 6.2% in the Northeast.