EXPLAINER: Why 1 murder count against Chauvin may not stick

MINNEAPOLIS — Prosecutors fought hard to add a third-degree murder charge against former police Officer Derek Chauvin in the death of George Floyd, but a conviction on that charge alone could set up a problematic scenario for them.
Apr 20, 2021 1:24 PM By: Canadian Press 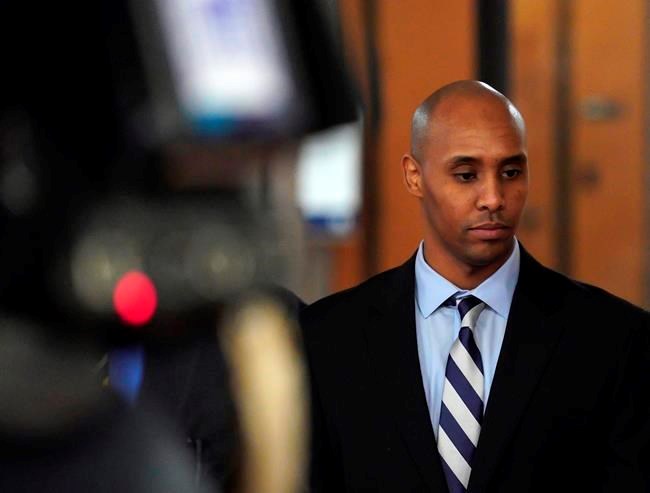 MINNEAPOLIS — Prosecutors fought hard to add a third-degree murder charge against former police Officer Derek Chauvin in the death of George Floyd, but a conviction on that charge alone could set up a problematic scenario for them.

That’s because another fired Minneapolis officer found guilty of third-degree murder has a pending appeal before the state Supreme Court — and if his conviction is overturned, it could mean a Chauvin conviction would fall, too.

Chauvin is charged with second- and third-degree murder and second-degree manslaughter. The white former officer pinned the Black man to the pavement last May for up to 9 minutes, 29 seconds. The jury can convict Chauvin of some, none or all three of the charges.

The risk is that if the jury acquits him of second-degree murder but agrees he is guilty of third-degree murder, a murder conviction might not ultimately stick.

The interpretation of Minnesota's third-degree murder statute is being challenged in the case of former Minneapolis Officer Mohamed Noor. He was convicted in the 2017 shooting death of Justine Ruszczyk Damond, a dual citizen of Australia and the U.S. who was killed after she called 911 to report a potential sexual assault behind her home.

At issue is a short phrase in the statute: that the defendant's conduct must be found to be “eminently dangerous to others."

The original charges against Chauvin included third-degree murder. But Hennepin County Judge Peter Cahill threw out that count in October, citing the word “others” — plural — in that phrase. Cahill said there was no evidence Chauvin’s actions endangered anyone beyond Floyd.

But then a Minnesota appeals court in February rejected similar legal reasoning in Noor’s case, ruling that a third-degree murder conviction can be sustained even if the action that caused a death was directed at just one person. Cahill then reinstated the charge against Chauvin.

However, Noor has taken his case to the Minnesota Supreme Court, which will hear arguments in June.

If the jury in the Chauvin case were to come back with a conviction on third-degree murder only, Chauvin “obviously could never be tried again on the other charges" because of his protection against double jeopardy, said Mike Brandt, a local attorney who has been closely following Chauvin’s trial.

And if the Minnesota Supreme Court rules in Noor's , that could help Chauvin get his own conviction thrown out, and then Chauvin “would basically walk," according to Brandt.

Ted Sampsell-Jones, a professor at the Mitchell Hamline School of Law in St. Paul, Minnesota, agreed it would be a “nightmare scenario” if Chauvin were acquitted of second-degree murder and convicted of third-degree, and the Supreme Court then reversed Noor’s conviction.

“If the Minnesota Supreme Court were to reverse Noor’s third-degree murder conviction, that would almost certainly invalidate Chauvin’s as well," Sampsell-Jones said. "But — that is quite unlikely all around.”

A conviction on one or both of the murder counts but an acquittal on the manslaughter charge would be “weird," he said.

Sentencing guidelines call for four years in prison on the manslaughter charge versus 12 1/2 years on each of the murder counts.