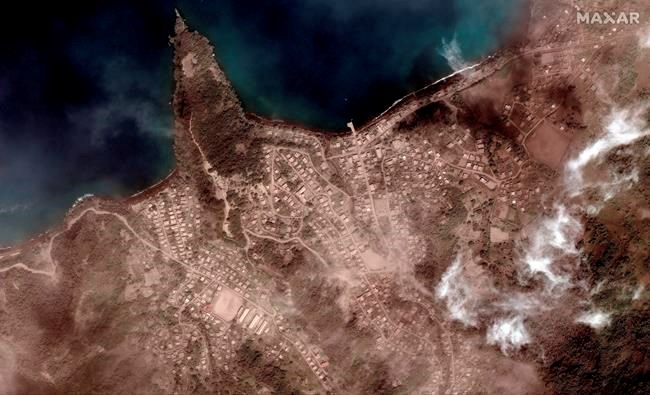 SAN JUAN, Puerto Rico — The United Nations announced Tuesday that it is seeking $29.2 million to help St. Vincent recover from ongoing volcanic eruptions that have destroyed homes and crops, contaminated water supplies and displaced up to 20% of people on the eastern Caribbean island.

Didier Trebucq, the U.N. resident for Barbados and the eastern Caribbean, described the scene as “apocalyptic” during an online press conference in St. Vincent.

“The devastating impact of this event on thousands of people is undeniable,” he said, adding that more money will be needed once damage assessments are completed.

Prime Minister Ralph Gonsalves said officials are still quantifying the damage, but that rebuilding will run “in the hundreds of millions of dollars,” on top of “massive” humanitarian relief needs.

More than 16,000 people were evacuated ahead of the first, April 9 explosion at La Soufriere volcano, with officials noting that ash is piled up to 16 inches (42 ) high in some homes in the northern part of St. Vincent, where the volcano is located.

More than 6,200 evacuees are staying in 88 government shelters and thousands of others in homes or private shelters.

Food, water and ash removal remain high priorities as nations and organizations pour supplies and funding into St. Vincent and the Grenadines, an island chain of more than 100,000 people, the majority of whom live on the main island of St. Vincent.

So far, U.N. agencies have set aside $2 million for water, hygiene and food vouchers and will send experts to help with the ash cleanup, while nations including Guyana, Dominica and Trinidad & Tobago have pledged funding and shipped basic supplies.

Gonsalves said feeding up to 12,000 people is an “extraordinary, existential challenge," for the island.

Help also has gone beyond caring for humans: The Eastern Caribbean Group of Companies sent food for a large pig spotted hanging around the island’s volcano observatory that has endeared itself to many St. Vincentians and was nicknamed “Tremor.”

Gonsalves also said he worried about the upcoming Atlantic hurricane season that starts in six weeks, as well as the pandemic, given that thousands of displaced people are now huddling in shelters and homes of friends and family.

Another concern is that ash and debris from the eruptions will form volcanic mudflows, lahars, as St. Vincent prepares for its rainy season. The first lahar was reported early Tuesday.

Scientists estimate that 100 million cubic meters of ash have fallen and Richard Robertson, who is leading the scientific team at the University of the West Indies’ Seismic Research Center studying La Soufriere, said during an online press conference that rains could unleash fast-flowing rivers of mud and debris capable of great damage.

During the conference, broadcast by local NBC radio, Robertson said scientists expect another explosion in the next week as the volcano seems to be forming a new lava dome.

While the volcano has been calm in recent days, “it can change pattern within minutes without any indication,” he said. “There’s a lot happening at the volcano that we don’t understand.”

The volcano had a minor eruption in December, with a previous eruption occurring in 1979. An older eruption in 1902 killed some 1,600 people.

Gonsalves warned it would take a long time for the northern one-third of St. Vincent to recover and rebuild. He noted that a high number of impoverished people live in the area, which has long relied on agriculture, animal husbandry, fishing and some tourism.

“None of that exists anymore. ... Plants have to be replanted” he said, his voice breaking. “We have been set back decades.”

Associated Press writer Jennifer Peltz contributed to this report from the United Nations.